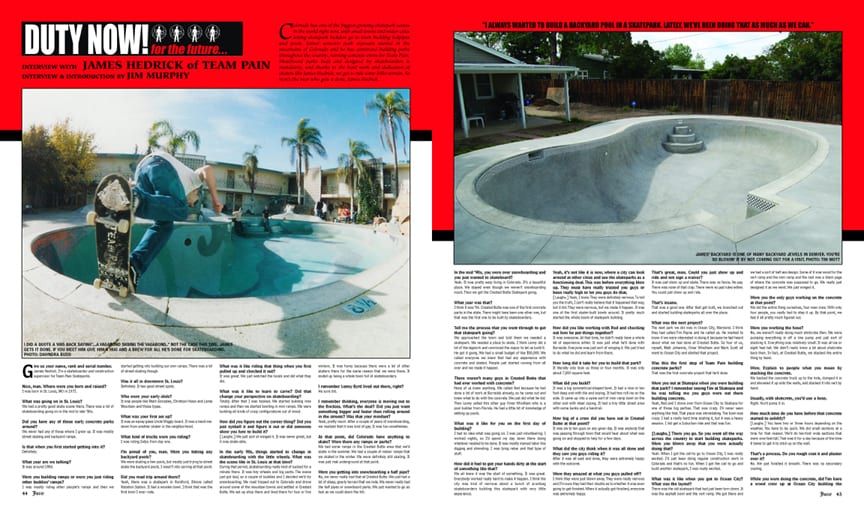 Colorado has one of the biggest growing skatepark scenes in the world right now, with small towns and major cities letting skatepark builders go to town building fullpipes and pools. James’ concrete park exposure started in the mountains of Colorado and he has continued building parks throughout the country, running concrete crews for Team Pain. Skateboard parks built and designed by skateboarders is mandatory, and thanks to the hard work and dedication of skaters like James Hedrick, we get to ride some killer terrain. So here’s the man who gets it done, James Hedrick.

Give us your name, rank and serial number.
James Hedrick. I’m a skateboarder and construction supervisor for Team Pain Skateparks.

What was going on in St. Louis?
We had a pretty good skate scene there. There was a lot of skateboarding going on in the mid to late ’80s.

Did you have any of those early concrete parks around?
We never had any of those where I grew up. It was mostly street skating and backyard ramps.

Is that when you first started getting into it?
Definitely.

Were you building ramps or were you just riding other buddies’ ramps?
I was mostly riding other people’s ramps and then we started getting into building our own ramps. There was a lot of street skating though.

Was it all in downtown St. Louis?
Definitely. It has good street spots.

Who were your early idols?
It was people like Mark Gonzales, Christian Hosoi and Lance Mountain and those types.

What was your first set up?
It was an epoxy glass Uncle Wiggly board. It was a hand-medown from another skater in the neighborhood.

What kind of trucks were you riding?
I was riding Indys from day one.

I’m proud of you, man. Were you hitting any backyard pools?
We were skating a few pools, but mostly just trying to street skate the backyard pools. I wasn’t into carving at that point.

Did you road trip around there?
Yeah, there was a skatepark in Rockford, Illinois called Rotation Station. It had a wooden bowl. I think that was the first bowl I ever rode.

What was it like riding that thing when you first pulled up and checked it out?
It was great. We just watched the locals and did what they did.

What was it like to learn to carve? Did that change your perspective on skateboarding?
Totally. After that I was hooked. We started building mini ramps and then we started bowling in mini ramps. We were building all kinds of crazy configurations out of wood.

How did you figure out the corner thing? Did you just eyeball it and figure it out or did someone show you how to build it?
[Laughs.] We just sort of winged it. It was never great, but it was skate-able.

In the early 90s, things started to change in skateboarding with the little wheels. What was the scene like in St. Louis at that time?
During that period, skateboarding really kind of sucked for a minute there. It was tiny wheels and big pants. The scene just got bad, so a couple of buddies and I decided we’d try snowboarding. We road tripped out to Colorado and drove around some of the mountain towns and settled in Crested Butte. We set up shop there and lived there for four or five winters. It was funny because there were a lot of other skaters there for the same reason that we were there. It ended up being a whole town full of skateboarders.

I remember Lenny Byrd lived out there, right?
He sure did.

I remember thinking, everyone is moving out to the Rockies. What’s the deal? Did you just want something bigger and faster than rolling around in the streets? Was that your mindset?
Yeah, pretty much. After a couple of years of snowboarding, we realized that it was kind of lame. It was fun nonetheless.

At that point, did Colorado have anything to skate? Were there any ramps or parks?
We had some ramps in the Crested Butte area that we’d skate in the summer. We had a couple of indoor ramps that we skated in the winter. We were definitely still skating. It was just real underground at that point.

In the mid ’90s, you were over snowboarding and you just wanted to skateboard?
Yeah. It was pretty easy living in Colorado. It’s a beautiful place. We stayed even though we weren’t snowboarding much. Then we got the Crested Butte Skatepark going.

What year was that?
I think it was ’96. Crested Butte was one of the first concrete parks in the state. There might have been one other one, but that was the first one to be built by skateboarders.

Tell me the process that you went through to get that skatepark going?
We approached the town and told them we needed a skatepark. We needed a place to skate. I think Lenny did a lot of the legwork and convinced the mayor to let us build it. He got it going. We had a small budget of like $50,000. We called everyone we knew that had any experience with concrete and skated. People just started coming from all over and we made it happen.

There weren’t many guys in Crested Butte that had ever worked with concrete?
None of us knew anything. We called Red because he had done a lot of work at Burnside already, so he came out and knew what to do with the concrete. We just did what he did. Then Lenny called this other guy Omer Windham who is a pool builder from Florida. He had a little bit of knowledge of setting up pools.

What was it like for you on the first day of building?
I had no idea what was going on. I was just volunteering. I worked nights, so I’d spend my day down there doing whatever needed to be done. It was mostly manual labor like digging and shoveling. I was tying rebar and that type of stuff.

How did it feel to get your hands dirty at the start of something like that?
We all knew it was the start of something. It was great. Everybody worked really hard to make it happen. I think the city was kind of nervous about a bunch of scumbag skateboarders building this skatepark with very little experience.

Yeah, it’s not like it is now, where a city can look around at other cities and see the skateparks as a functioning deal.This was before everything blew up. They must have really trusted you guys or been really high to let you guys do that.
[Laughs.] Yeah, I know. They were definitely nervous. To tell you the truth, I can’t really believe that it happened that way, but it did. They were nervous, but we made it happen. It was one of the first skater-built bowls around. It pretty much started the whole boom of skatepark building.

How did you like working with Red and checking out how he put things together?
It was awesome. At that time, he didn’t really have a whole lot of experience either. It was just what he’d done with Burnside. Everyone was just sort of winging it. We just tried to do what he did and learn from there.

How long did it take for you to build that park?
It literally only took us three or four months. It was only about 7,000 square feet.

What did you build?
It was a big symmetrical-shaped bowl. It had a nine or ten foot deep end with tile and coping. It had two roll ins on the side. It came up into a spine sort of mini ramp bowl on the other end with steel coping. It had a tiny little street area with some banks and a handrail.

How big of a crew did you have out in Crested Butte at that point?
It was six to ten guys on any given day. It was anybody that was passing through town that would hear about what was going on and stopped to help for a few days.

What did the city think when it was all done and they saw you guys riding it?
After it was all said and done, they were extremely happy with the outcome.

Were they amazed at what you guys pulled off?
I think they were just blown away. They were really nervous and I’m sure they had their doubts as to whether it was even going to get finished. When it actually got finished, everyone was extremely happy.

That’s insane.
That was a good one. After that got built, we branched out and started building skateparks all over the place.

What was the next project?
The next park we did was in Ocean City, Maryland. I think they had called Tim Payne and he called us. He wanted to know if we were interested in doing it because he had heard about what we had done at Crested Butte. So four of us, myself, Matt Johannis, Omer Windham and Mark Scott all went to Ocean City and started that project.

Was this the first step of Team Pain building concrete parks?
That was the first concrete project that he’d done.

Were you out at Skatopia when you were building that park? I remember seeing Tim at Skatopia and he was telling me you guys were out there
building concrete.
Yeah, Red and I drove over from Ocean City to Skatopia for one of those big parties. That was crazy. I’d never seen anything like that. That place was intimidating. The bowl was crazy. I had a really hard time skating it, but it was a heavy session. I did get a Suburban ride and that was fun.

[Laughs.] There you go. So you went all the way across the country to start building skateparks. Were you blown away that you were actually doing that?
Yeah. When I got the call to go to Ocean City, I was really excited. I’d just been doing regular construction work in Colorado and that’s no fun. When I got the call to go and build another skatepark, I was really excited.