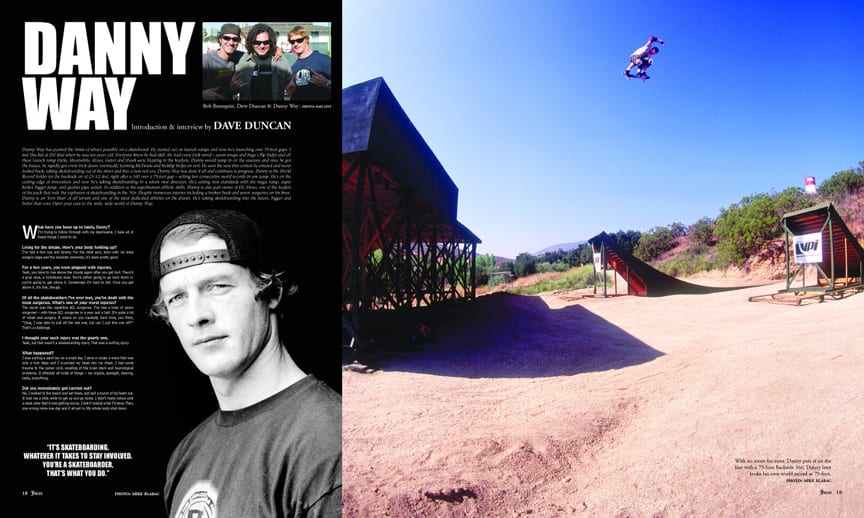 Danny Way has pushed the limits of what’s possible on a skateboard. He started out on launch ramps and now he’s launching over 75-foot gaps. I met this kid at Del Mar when he was ten years old. Everyone knew he had skill. He had every trick wired – saran wraps and finger flip Indys and all these launch ramp tricks. Meanwhile, Hosoi, Gator and Hawk were blasting in the keyhole. Danny would jump in on the sessions and once he got the basics, he rapidly got every trick down, eventually learning McTwists and kickflip Indys on vert. He won the very first contest he entered and never looked back, taking skateboarding out of the street and into a new vert era. Danny Way has done it all and continues to progress. Danny is the World Record holder for the backside air at 23-1/2 feet, right after a 360 over a 75-foot gap – setting two consecutive world records in one jump. He’s on the cutting edge of innovation and now he’s taking skateboarding in a whole new direction. He’s setting new standards with the mega ramp, super kicker, bigger jump, and quarter pipe action. In addition to his superhuman athletic skills, Danny is also part owner of DC Shoes, one of the leaders of the pack that rode the explosion of skateboarding in the ’90s. Despite numerous injuries including a broken back and seven surguries on his knee, Danny is an ‘Iron Man’ of all terrain and one of the most dedicated athletes on the planet. He’s taking skateboarding into the future, bigger and better than ever. Open your eyes to the wide, wide world of Danny Way.

“I grew up in San Diego, in Cardiff. I grew up surfing and skating. My dad was into surfing. It was great living by Del Mar. We’d drive down the 5 Highway by the skatepark. And I’d be looking out the window and seeing guys launching airs. I was just simply attracted to the principal of launching airs on skateboards out of pools.”

What have you been up to lately, Danny?
I’m trying to follow through with my daydreams. I have all of these things I want to do.

Living for the dream. How’s your body holding up?
I’ve had a few ups and downs. For the most part, even with my knee surgery saga and the shoulder blowouts, it’s been pretty good.

For a few years, you were plagued with injuries.
Yeah, you have to rise above the clouds again after you get hurt. There’s a gray area, a turbulence area. You’re either going to go back down or you’re going to get above it. Sometimes it’s hard to tell. Once you get above it, it’s fine, though.

Of all the skateboarders I’ve ever met, you’ve dealt with the most surgeries. What’s one of your worst injuries?
The worst was the repetitive ACL surgeries. I’ve had a total of seven surgeries – with three ACL surgeries in a year and a half. It’s quite a bit of rehab and surgery. It wears on you mentally. Each time, you think, “Okay, I was able to pull off the last one, but can I pull this one off?” That’s a challenge.

I thought your neck injury was the gnarly one.
Yeah, but that wasn’t a skateboarding injury. That was a surfing injury.

What happened?
I was surfing a sand bar on a small day. I dove in under a wave that was only a foot deep and I crunched my head into my chest. I had some trauma to the spinal cord, swelling of the brain stem and neurological problems. It affected all kinds of things – my organs, eyesight, hearing, taste, everything.

Did you immediately get carried out?
No, I walked to the beach and sat there, and spit a bunch of my teeth out. It took me a little while to get up and go home. I didn’t really notice until a week later that it was getting worse. I didn’t realize what I’d done. Then, one wrong move one day and it all set in. My whole body shut down.

You were just laid up?
Yeah, I could barely move my hands. The top two vertebrae in my neck got squashed. There are ligaments that hold them in place, so they don’t slip from side, to side. Your skull sits on them. I tore the ligaments that hold it to the base of my skull. The vertebrae slipped out of place and pinched my spinal cord. There’s just loose vertebrae slipping around and banging into my spinal cord. That’s what I had to deal with for a year and a half.

You had that pain for a year and a half?
Yeah. The doctors couldn’t really do anything about it. I had to go to an atlas specialist and have it put it in place a couple of times a day. It was pretty crazy.

You told me the doctors couldn’t help solve the problem, but you found an alternative.
Yeah, the doctors didn’t understand it. I tried everything. Then I found this guy that had dealt with similar injuries. The orthopedic doctors just didn’t understand. They don’t think beyond, “Does he need to be cut open? Is there a broken bone that we can see?” I had pressure fractures, but my injury wasn’t about the bones being broken. It was about torn ligaments and the vertebrae pinching my spinal cord. The doctors didn’t see that. They couldn’t tell me what was happening. It took a guy that doesn’t even have a medical degree to find out what was going on.

You had this injury for a year?
Yeah, and the vertebrae were pinching my spinal cord the whole time.

Did you think your skateboarding career was over?
Totally. It was over. I felt like, if I could get feeling back in my hands, and see straight and stand up without feeling dizzy, that I’d be hitting a home run. I was having a hard time just getting through day-to-day life.

Through the late ’90s, you had all these crazy injuries going on where it seemed like you were still ripping, but you were just trying to survive.
There was a time period where I didn’t understand how to take care of myself, physically. I had to learn how to do that. All those events taught me how to put myself in a position with longevity. That’s where I’m at now. I feel ready. I’ve been on such a mission since then. Since I hurt my neck, I’ve learned so much about taking care of myself. I haven’t stopped training. I do whatever I have to do to be able to keep going. If I don’t, I get hurt or start feeling weak. I got myself in the position now where I can see the light for another ten years.

Cheers to that. Now here you are coming out with a bang again. It’s insane.
It’s just getting out of the turbulence zone. You have to climb another 10,000 feet and rise above it. Then it’s smooth sailing.

When we went to visit Cardiel, you had some advice for him. What did you tell him?
I was just trying to inspire him. I told him that when you’re in that state of an injury, all the little things matter, even simple things like eating. My terminology was that you don’t put gas in a race car on race day. You have to put rocket fuel in it. I told him he had to really focus on one goal. And whatever he had to do to get there the quickest, do it.

That’s enough about injuries. What was it like in your early days?
I grew up in San Diego, in Cardiff. I grew up surfing and skating. My dad was into surfing. It was great living by Del Mar. We’d drive down the 5 Highway by the skatepark. And I’d be looking out the window and seeing guys launching airs. I was just simply attracted to the principal of launching airs on skateboards out of pools. Every time we drove by, I was like a kid in the candy store watching for the thirty seconds I could see it. My dad realized how excited I was about the skatepark, so he started taking me to Del Mar when I was five years old. At Del Mar, you had to be six years old to skate. My dad lied for me so I could skate. When I was a kid it was all about the skate ramp and surfing.