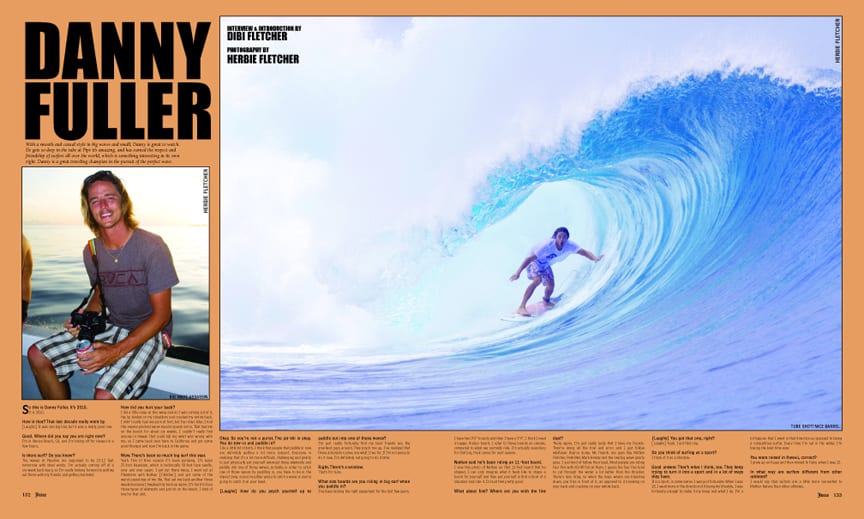 With a smooth and casual style in big waves and small, Danny is great to watch. He gets so deep in the tube at Pipe it’s amazing, and has earned the respect and friendship of surfers all over the world, which is something interesting in its own right. Danny is a great traveling champion in the pursuit of the perfect wave.

“I’VE REALIZED THAT THOSE ADRENALIN RUSHES ARE WHAT I LIVE FOR.”

How is that? That last decade really went by.
[Laughs] It was one big blur, but it was a really good one.

Good. Where did you say you are right now?
I’m in Venice Beach, CA, and I’m taking off for Hawaii in a few hours.

Is there surf? Do you know?
The waves at Pipeline are supposed to be 10-12 feet tomorrow with ideal winds. I’m actually coming off of a six-week back injury, so I’m really looking forward to getting out there with my friends and getting barreled.

How did you hurt your back?
I did a little snap on this wave and as I was coming out of it, the lip landed on my shoulders and cracked my entire back. I didn’t really feel any pain at first, but four days later, I had this severe pinched nerve muscle spasm set in. That had me on the bench for about six weeks. I couldn’t really find anyone in Hawaii that could tell me what was wrong with me, so I came back over here to California and got some good therapy and now I’m back in the game.

Wow. There’s been so much big surf this year.
Yeah. This El Nino season it’s been pumping. It’s been 25-foot Hawaiian, which is technically 50-foot face swells, over and over again. I got out there twice. I went out at Phantoms with Nathan [Fletcher] and got some of the worst poundings of my life. That set me back another three weeks because I tweaked my back up again. It’s hard to face those types of elements and just sit on the beach. I kind of live for that shit.

Okay. So you’re not a purist. The jet-ski is okay. You do tow-in and paddle in?
I do a little bit of both. I think that people that paddle in now are definitely getting a lot more respect. Everyone is realizing that it’s a lot more difficult, challenging and gnarly to just physically put yourself amongst those elements and paddle into one of those waves. Actually, in order to catch one of those waves by paddling in, you have to be in the impact zone, so you’re either going to catch a wave or you’re going to catch it on your head.

[Laughs] How do you psych yourself up to paddle out into one of those waves?
I’m just really fortunate that my best friends are the gnarliest guys around. They psych me up. I’ve realized that those adrenalin rushes are what I live for. If I’m not going to do it now, I’m definitely not going to do it later.

Right. There’s a window.
That’s for sure.

What size boards are you riding in big surf when you paddle in?
I’ve been lacking the right equipment for the last few years. I have two 9’6” boards and then I have a 9’4”. I think I need a bigger, thicker board. I refer to those boards as canoes, compared to what we normally ride. I’m actually searching for that big, thick canoe for next season.

Nathan said he’s been riding an 11-foot board.
I saw this photo of Nathan on that 11-foot board that he shaped. I can only imagine what it feels like to shape a board for yourself and then put yourself in that critical of a situation and ride it. It must feel pretty good.

What about fins? Where are you with the fins deal?
There again, I’m just really lucky that I have my friends. They’re doing all the trial and error and I just follow whatever they’re doing. My friends are guys like Nathan Fletcher, Pete Mel, Mark Healey and the real big wave gnarly guys. I just kind of follow their lead. Most people are riding four fins with 60/40 foil on them. I guess the four fins tend to cut through the water a lot better than the thruster. There’s less drag, so when the huge waves are breaking down, you’ll be in front of it, as opposed to it breaking on your back and cracking on your whole back.

Do you think of surfing as a sport?
I think of it as a lifestyle.

Good answer. That’s what I think, too. They keep trying to turn it into a sport and in a lot of ways they have.
It is a sport, in some sense. I was just fortunate. When I was 18, I went more in the direction of it being my lifestyle. I was fortunate enough to make it my living and what I do. I’m a lot happier that I went in that direction as opposed to being a competitive surfer. Every time I’m out in the water, I’m having the best time ever.