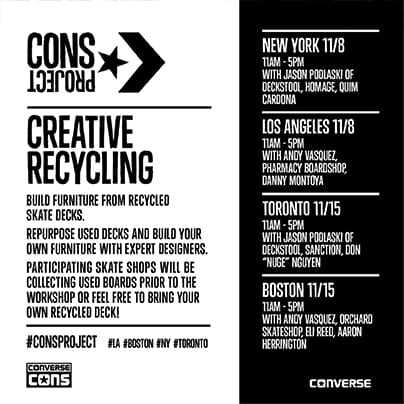 The CONS Project: Creative Recycling event will go down in New York, Boston, Los Angeles and Toronto on Nov 8 and Nov 15 and will focus on how to build furniture from recycled skate decks. Repurpose used decks and build your own furniture with expert designers. Participating skate shops will be collecting used boards prior to the workshop or feel free to bring your own recycled deck. Registration is open now at: http://consproject.com

About “Creative Recycling”: Geared towards aspiring designers and artistic builders between the ages of 13-24, “Creative Recycling” will teach participants the key skills of repurposing used skateboards. From building furniture out of recycled skate decks to designing and painting finished pieces, workshops will be led by rising designer, craftsman, and founder of skateboard recycling company, Deckstool, Jason Podlaski in New York and Toronto, and renowned designer and furniture-maker, Andy Vasquez in Los Angeles and Boston. Renowned professional skaters – as well as CONS Skate Team members and friends of CONS alike – such as Eli Reed, Aaron Herrington, Don “Nuge” Nguyen, Quim Cardona, and Danny Montoya, will also be on-hand to work with designers and craftsmen in each city.