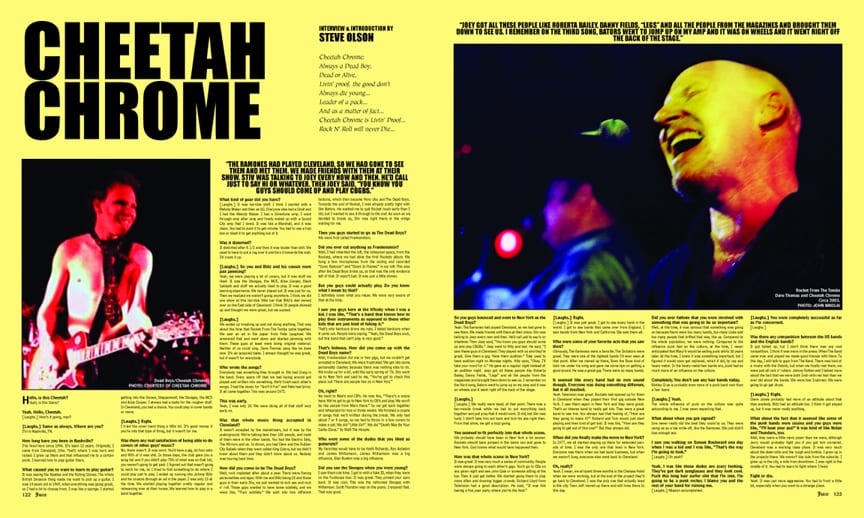 INTERVIEW AND INTRODUCTION BY STEVE OLSON
PHOTOS BY JOHN NIKOLAI

“There was kind of a rivalry with the Pistols, but when we finally met them, we were just all rock n’ rollers. Johnny Rotten and I talked more about the fact that we were both Irish with red hair than we ever did about the bands. We were two Irishmen. We were going to go get drunk.”

Hello, is this Cheetah?
Yeah, is this Steve?

[Laughs.] Same as always. Where are you?
I’m in Nashville, TN.

How long have you been in Nashville?
I’ve lived here since 1996. It’s been 12 years. Originally, I came from Cleveland, Ohio. That’s where I was born and raised. I grew up there and that influenced me to a certain point. I learned how to play guitar there.

What caused you to want to learn to play guitar?
It was seeing the Beatles and the Rolling Stones. The whole British Invasion thing made me want to pick up a guitar. I was 14 years old in 1969, when everything was going great, so I had a lot to choose from. I was like a sponge. I started getting into the Stones, Steppenwolf, the Stooges, the MC5 and Alice Cooper. I always had a taste for the rougher stuff. In Cleveland, you had a choice. You could play in cover bands or move.

[Laughs] Right.
I tried the cover band thing a little bit. It’s good money, if you’re into that type of thing, but it wasn’t for me.

Was there any real satisfaction of being able to do covers of other people’s music?
No, there wasn’t. It was work. You’d have a gig, do four sets and 90% of it was shit. In those days, the club gave you a song list and if you didn’t play 75% of what was on that list, you weren’t going to get paid. I figured out that wasn’t going to work for me, so I tried to find something to do where I could play just to play. I ended up running into Johnny Blitz and his cousins through an ad in the paper. I was only 15 at the time. We started playing together pretty regular and rehearsing over at their house. We learned how to play in a band together.

What kind of gear did you have?
[Laughs] It was horrible stuff. I think I started with a Melody Maker and then an SG. Everyone else had a Strat and I had the Melody Maker. I had a Silvertone amp. I went through amp after amp and finally ended up with a Sound City amp that I loved. It was like a Marshall, and it was clean. You had to push it to get volume. You had to use a fuzz box or blast it to get anything out of it.

Was it distorted?
It distorted after 8 1/2 and then it was louder than shit. We used to have to put a rug over it and turn it towards the wall. I’d crank it up.

[Laughs] So you and Blitz and his cousin were just jamming?
Yeah. We were playing a lot of covers, but it was stuff that we liked. It was the Stooges, the MC5, Alice Cooper, Black Sabbath and stuff we actually liked to play. It was a good learning experience. We never played out. It was just for us. Then we realized we weren’t going anywhere. I think we did one show at this horrible little bar that Blitz’s dad owned over on the East Side of Cleveland. I think 25 people showed up and thought we were great, but we sucked. We ended up breaking up and not doing anything. That was about the time that Rocket From The Tombs came together. We saw an ad in the paper from Pete Laughner. We answered that and went down and started jamming with them. These guys at least were doing original material. Neither of us could sing. Dave Thomas sang like he does now. It’s an acquired taste. I always thought he was great, but it wasn’t for everybody.

Who wrote the songs?
Everybody had something they brought in. We had Craig in the band. Every spare riff that we had got played and written into something. We’d finish each other’s songs. I had the music for “Ain’t it Fun” and Pete had lyrics. It all came together. This was around 1973.

This was early.
Yeah, I was only 18. We were doing all of that stuff very early on.

Was that whole music thing accepted in Cleveland?
It wasn’t accepted by the mainstream, but it was by the underground. We’re talking less than 100 people, and most of them were in the other bands. You had the Electric Eels, The Mirrors and us. In Akron, you had Devo and the Rubber City Rebels when they were called King Cobra, but we didn’t know about them and they didn’t know about us. Nobody was touring back then.

How did you come to be The Dead Boys?
Well, rock imploded after about a year. There were flaring personalities and egos. With me and Blitz being 18 and those guys in their early 20s, we just wanted to kick ass and rock n’ roll. Those guys wanted to have some subtlety, and we were like, “Fuck subtlety.” We split into two different factions, which then became Pere Ubu and The Dead Boys. Towards the end of Rocket, I was already pretty tight with Stiv Bators. He wanted me to quit Rocket much early than I did, but I wanted to see it through to the end. As soon as we decided to break up, Stiv was right there in the wings waiting for me.

Then you guys started to go as The Dead Boys?
We were first called Frankenstein.

Did you ever cut anything as Frankenstein?
Well, I had inherited the loft, the rehearsal space, from the Rockets, where we had done the first Rockets album. We hung a few microphones from the ceiling and recorded “Sonic Reducer” and “Down In Flames” in our loft. This was after the Dead Boys broke up, so that was the only evidence left of that. It wasn’t bad. It was just a little slower.

But you guys could actually play. Do you know what I mean by that?
I definitely know what you mean. We were very aware of that at the time.

I saw you guys here at the Whisky when I was a kid. I was like, “That’s a band that knows how to play their instruments as opposed to these other kids that are just kind of faking it.”
That’s why hardcore drove me nuts. I hated hardcore when it came out. People were saying. “The Dead Boys suck, but this band that can’t play is very good.”

That’s hideous. How did you come up with the Dead Boys name?
Well, Frankenstein did one or two gigs, but we couldn’t get arrested in Cleveland. We were frustrated. We got into some personality clashes because there was nothing else to do. We broke up for a bit, until the early spring of ’76. Stiv went up to New York and said to me, “You’ve got to check this place out. There are people like us in New York.”

Oh, right?
He went to Max’s and CB’s. He was like, “There’s a scene here. We’ve got to go to New York to CB’s and play. We won’t be like people from Mars there.” So we got back together and rehearsed for two or three weeks. We finished a couple of songs that we’d written during the break. We only had about seven or eight songs, so we had to throw in a few covers to make a set. We did “Little Girl”, and “Death May Be Your Santa Claus” by Mott The Hoople.

Did you see the Stooges when you were young?
I saw them one time. I got in with a fake ID, when they were on the Funhouse tour. It was great. They pinned your ears back. It was cool. This was the reformed Stooges with Willamson. Scott Thurston was on the piano. I enjoyed that. That was good.

So you guys bounced and went to New York as the Dead Boys?
Yeah. The Ramones had played Cleveland, so we had gone to see them. We made friends with them at their show. Stiv was talking to Joey every now and then. He’d call just to say hi or whatever. Then Joey said, “You know you guys should come up and play CBGBs.” Joey went to Hilly and lied. He said, “I saw these guys in Cleveland. They played with us and they’re great. Give them a gig. Have them audition.” They used to have audition night on Monday nights. Hilly says, “Okay. I’ll take your word for it.” He gave us a regular night instead of an audition night. Joey got all these people like Roberta Bailey, Danny Fields, Legs and all the people from the magazines and brought them down to see us. I remember on the third song, Bators went to jump up on my amp and it was on wheels and it went right off the back of the stage. We really were dead, at that point. There was a ten-minute break while we had to put everything back together and just pray that it would work. It did, but Stiv was lucky I didn’t take him out back and kick his ass right then. From that show, we got a buzz going.

You seemed to fit perfectly into that whole scene.
We probably should have been in New York a lot sooner. Rockets should have jumped in the damn van and gone to New York. God knows what would have happened then.

How was that whole scene in New York?
It was great. It was very much a sense of community. People were always going to each other’s gigs. You’d go to CBs on any given night and see John Cale or someone sitting at the bar. Then it just got better. We started going there to play more often and drawing bigger crowds. Richard Lloyd from Television had a good description. He said, “It was like having a five year party where you’re the host.”