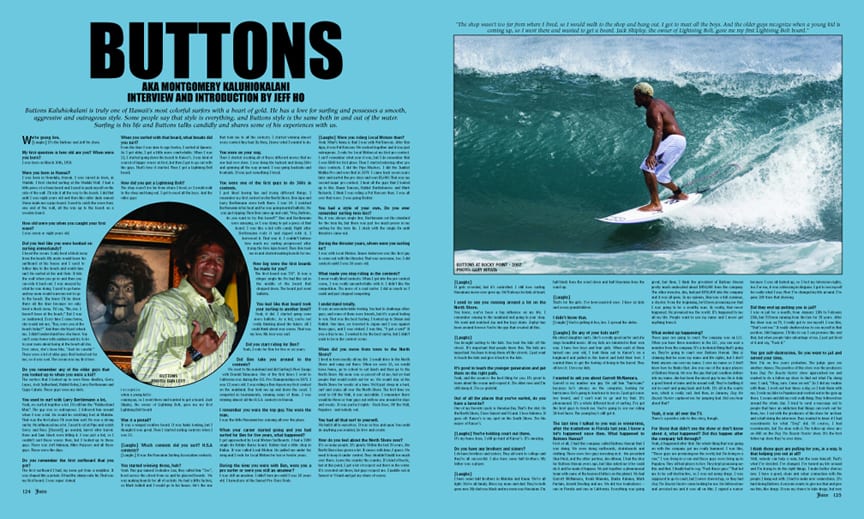 Buttons Kaluhiokalani is truly one of Hawaii’s most colorful surfers with a heart of gold. He has a love for surfing and possesses a smooth, aggressive and outrageous style. Some people say that style is everything, and Buttons style is the same both in and out of the water. Surfing is his life and Buttons talks candidly and shares some of his experiences with us.

“THE SHOP WASN’T TOO FAR FROM WHERE I LIVED, SO I WOULD WALK TO THE SHOP AND HANG OUT. I GOT TO MEET ALL THE BOYS. AND THE OLDER GUYS RECOGNIZE WHEN A YOUNG KID IS COMING UP, SO I WENT THERE AND WANTED TO GET A BOARD. JACK SHIPLEY, THE OWNER OF LIGHTNING BOLT, GAVE ME MY FIRST LIGHTNING BOLT BOARD.”

Were you born in Hawaii?
I was born in Honolulu, Hawaii. I was raised in town, in Waikiki. I first started surfing at the Waikiki Wall. I had a little piece of a foam board and I used to push myself on the side of the wall. I’d ride it all the way to the beach. I did that until I was eight years old and then this older dude named Stone made me a pipo board. I used to catch the wave from one end of the wall, all the way up to the beach on a wooden board.

How old were you when you caught your first wave?
I was seven or eight years old.

Did you feel like you were hooked on surfing immediately?
I loved the ocean. I only lived a block away from the beach. My uncle would leave his surfboard at his house and I used to follow him to the beach and watch him surf. He surfed at Ins and Outs. It hits the wall when you go in and then you can ride it back out. I was amazed by what he was doing. I used to go home and my mom would warn me not to go to the beach. She knew I’d be down there all the time because we only lived a block away. I’d say, “No, ma. I haven’t been at the beach.” But I was so sunburned. Every time I came home, she would ask me, “Boy, were you at the beach today?” And then she’d just whack me. I didn’t understand how she knew. You can’t come home with a sunburn and try to lie to your mom about being at the beach all day. Ever since, she’s been like, “Just be careful.” There were a lot of older guys that looked out for me, so it was cool. The ocean was my first love.

Do you remember any of the older guys that you looked up to when you were a kid?
The surfers that I looked up to were Reno Abellira, Gerry Lopez, Jock Sutherland, Rabbit Kekai, Larry Bertlemann and Cippy Cabato. Those guys were my idols.

You used to surf with Larry Bertlemann a lot.
Yeah, we surfed together a lot. I’d call him the “Rubberband Man”. The guy was so outrageous. I followed him around when I was a kid. He would be switching foot at Makaha. That was the first place I’d seen him surf. He was a strong surfer. He influenced me a lot. I used to sit at Pipe and watch Gerry and Rory [Russell] go mental, barrel after barrel. Reno and Sam Hawk were killing it. I was just a kid, so I couldn’t surf those waves then, but I looked up to those guys. There was Jeff Hakman, Mike Purpose and all those guys. Those were the days.

When you surfed with that board, what breaks did you surf?
From the time I was nine to age twelve, I surfed at Queens. As I got older, I got a little more comfortable. When I was 13, I started going down the beach to Kaiser’s. I was kind of scared of bigger waves at first, but then I got to go out with the guys. That’s how it started. Then I got a Lightning Bolt board.

How did you get a Lightning Bolt?
The shop wasn’t too far from where I lived, so I would walk to the shop and hang out. I got to meet all the boys. And the older guys recognize when a young kid is coming up, so I went there and wanted to get a board. Jack Shipley, the owner of Lightning Bolt, gave me my first Lightning Bolt board.

Was it a pintail?
It was a winged swallow board. It was funky looking, but I thought it was great. Then I started surfing contests when I was 13.

[Laughs] Which contests did you surf? H.S.A contests?
[Laughs] It was the Hawaiian Surfing Association contests.

You started winning those, huh?
Yeah. This guy named Zoobadee Lau, they called him “Zoo”, lived across the street from us and he glassed boards. He was making boards for all of us kids. He had a little factory, so Mark Liddell and I would go to his house. He’s the one that took me to all the contests. I started winning almost every contest they had. By then, I knew what I wanted to do.

You were on your way.
Then I started creating all of these different moves that no one had ever done. I was doing the layback and doing 360s and spinning all the way around. I was going backside and frontside. It was just something I loved.

You were one of the first guys to do 360s in contests.
I just liked having fun and trying different things. I remember my first contest on the North Shore. Ben Aipa and Larry Bertlemann were both there. I was 14. I watched Bertlemann in his heat and he was going mental ballistic. He was just ripping. Then Ben came up and said, “Hey, Buttons, do you want to try this board?” Ben and Bertlemann were amazing, so I was dying to get a piece of that board. I was like a kid with candy. Right after Bertlemann rode it and ripped with it, I borrowed it. That was it. I couldn’t believe how much my surfing progressed after trying the Ben Aipa board. Then Ben took me in and started making boards for me.

How big were the first boards he made for you?
The first board was 5’8”. It was a stinger single fin. He had this cut in the middle of the board that dropped down. The board just went ballistic.

You feel like that board took your surfing to another level?
Yeah, it did. I started going even more ballistic. As a kid, you’re not really thinking about the future. All I could think about was waves. That was my love. My love was surf.