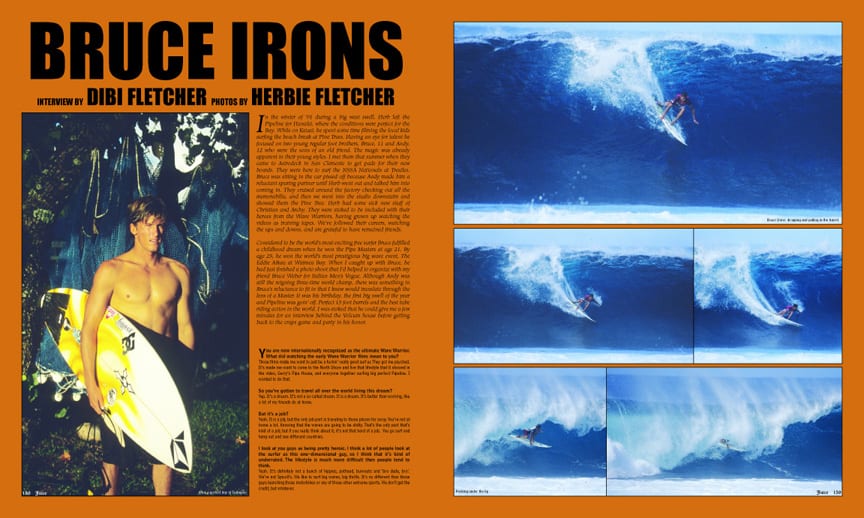 In the winter of ’91 during a big west swell, Herb left the Pipeline for Hanalei, where the conditions were perfect for the Bay. While on Kauai, he spent some time filming the local kids surfing the beach break at Pine Trees. Having an eye for talent he focused on two young regular foot brothers, Bruce, 11 and Andy, 12 who were the sons of an old friend. The magic was already apparent in their young styles. I met them that summer when they came to Astrodeck in San Clemente to get pads for their new boards. They were here to surf the NSSA Nationals at Trestles. Bruce was sitting in the car pissed off because Andy made him a reluctant sparing partner until Herb went out and talked him into coming in. They cruised around the factory checking out all the memorabilia, and then we went into the studio downstairs and showed them the Pine Tree. Herb had some sick new stuff of Christian and Archy. They were stoked to be included with their heroes from the Wave Warriors, having grown up watching the videos as training tapes. We’ve followed their careers, watching the ups and downs, and are grateful to have remained friends. Considered to be the world’s most exciting free surfer Bruce fulfilled a childhood dream when he won the Pipe Masters at age 21. By age 25, he won the world’s most prestigious big wave event, The Eddie Aikau at Waimea Bay. When I caught up with Bruce, he had just finished a photo shoot that I’d helped to organize with my friend Bruce Weber for Italian Men’s Vogue. Although Andy was still the reigning three-time world champ, there was something in Bruce’s reluctance to fit in that I knew would translate through the lens of a Master. It was his birthday, the first big swell of the year and Pipeline was going off. Perfect 15 foot barrels and the best tube riding action in the world. I was stoked that he could give me a few minutes for an interview behind the Volcum house before getting back to the craps game and party in his honor.

You are now internationally recognized as the ultimate Wave Warrior. What did watching the early Wave Warrior films mean to you?
Those films made me want to just be a fuckin really good surfer. They got me psyched. It’s made me want to come to the North Shore and live that lifestyle that it showed in the video, Gerry’s Pipe House, and everyone together surfing big perfect Pipeline. I wanted to do that.

So you’ve gotten to travel all over the world living this dream?
Yep. It’s a dream. It’s not a so-called dream. It is a dream. It’s better than working, like a lot of my friends do at home.

But it’s a job?
Yeah. It is a job, but the only job part is traveling to those places far away. You’re not at home a lot. Knowing that the waves are going to be shitty. That’s the only part that’s kind of a job, but if you really think about it, it’s not that hard of a job. You go surf and hang out and see different countries.

I look at you guys as being pretty heroic. I think a lot of people look at the surfer as this one-dimensional guy, so I think that it’s kind of underrated. The lifestyle is much more difficult then people tend to think.
Yeah. It’s definitely not a bunch of hippies, pothead, burnouts and ‘bro dude, bro’. We’re not Spicoli’s. We like to surf big waves, big thrills. It’s no different than those guys launching those motorbikes or any of those other extreme sports. We don’t get the credit, but whatever.

Who did you look up to as a grom?
I’d go watch Christian and Archy as they’re doing airs, and Alexander does radical stuff, so that’s what I wanted to do. Kelly is also really a guy I look up to because he’s really good and clean, and Occy surfs good. It was just a little of everybody.

What about the dealing with the crowds now?
Crowds suck, but you’ve got to deal with it. There are crowds everywhere. It’s not that crowded where I live. It’s crowded, but I get waves, so it’s not that bad.

I’ve gotten interested in Hawaiian land rights. You were raised on Kauai. What do you think about the fact that it’s getting harder and harder to get to the beach because of the land rush that’s gone on?
It sucks, especially where I live, because it’s so expensive. Of all the people who grew up in the town that I grew up in on Kauai, almost 99% of those people will not be able to own a house where they grew up because the prices are ridiculous. People just buy it as a vacation rental. They go to see it once a year, and then collect income. It sucks.

I’ve been interviewing some of the men that I think are warriors in the fight to help Hawaiians own their own land.
Yeah. There is this one guy, Kane Pa. Do you know Ralph Pa?

We talked to Kane last night.
Okay. Yeah. He’s nice. He’s a good guy. He knows all about that. He’s a warrior. He knows exactly what’s going on with the whole land trip. What can you do but hope for a hurricane or a tidal wave or something?

Do you think that being born and raised in a place where there’s an active volcano gives you that fire?
Yeah. I don’t know. Kauai doesn’t have a volcano, but it’s still really alive. I love it. I wouldn’t trade it for anything. There’s a lot of energy there. It can blow anytime, I guess. It’s something that gets you, something inside.

Even with all the timeshares, they haven’t been able to steal the energy?
No way. They’ll never really kill that.

I look at the Pipeline as the place that spawned the wave warrior of the ’80s and ’90s. How about now?
Oh, yeah. That crew is radical: Marvin, Nicky and Johnny Boy and the House and everybody. Now we’ve got our new modern day wave warrior clan right here. It’s just a different generation, different time. I’m sure it’s going to keep cycling forever, as long as this place still breaks the way it does.

Do you see very many of the older guys around anymore?
A little bit. Not as much, but they’re still around.

It makes you feel connected?
Yeah. They are the real deal.

So are you.
Yeah. Different generation.

Yeah, but the real deal.
I guess so.

I asked John John who influenced him. He said, “Bruce, Andy, Kelly, Christian, Nathan and his mom and brothers.”
That’s cool.

Has it been hard for you having a brother that surfs? It was hard sometimes for Christian and Nathan.
Yeah, well. It’s hard. Fuck yeah. We’;re brothers. It’s hard, period. You’re a brother and you’re competitive, but it’s also good because we push each other. I wouldn’t be as amped as I am now and I’m sure he wouldn’t be as amped as he is, if he didn’t fuck with me and I didn’t fuck with him.

I hated to ask you that question because I know everybody does, but I saw Christian and Nathan struggle with it.
Yeah. It’s a struggle but a lot of it’s good. It’s bad and good, but it’s all good.

FOR THE REST OF THE STORY, ORDER ISSUE #61 BY CLICKING HERE…