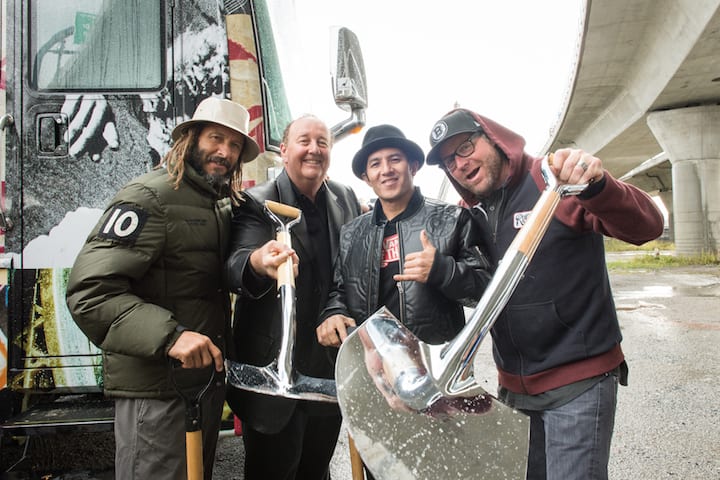 Park Will be First Large-Scale Skatepark in New England

Steve Van Doren traveled back to his hometown in Boston to celebrate the groundbreaking of Lynch Family Skatepark alongside Congressman Michael Capuano, Peter Lynch of the Lynch Foundation, Renata von Tscharner of the Charles River Conservancy and state officials, beneath the ramps of the Zakim Bridge. The 40,000 square foot skateboard and recreation facility, near North Point Park in Cambridge, will open in 2015.

“Urban parks and recreation are essential to quality of life for residents and help to revitalize communities,” said Governor Deval Patrick. “My Administration is committed to investing in the diversification of our public parks to provide open space for all.”

Once constructed, the park will be managed, maintained and operated by the Department of Conservation and Recreation (DCR) as a state park. Vans, the original action sports footwear and apparel brand, plans to hold two large-scale, professional skating events at the park annually. In addition to the skatepark, North Point Park offers two playgrounds, an open lawn and waterfront property.

“Many of us have waited a long time for this day and I am very pleased to celebrate the official groundbreaking of the Lynch Family Skatepark,” said Congressman Mike Capuano. “I look forward to the transformation of this former brownfields site to an urban recreational jewel where skateboarders and other athletes can showcase their talents.”

“The public-private partnership that brought this project to fruition will continue to provide recreational opportunities and a world-class destination for the Greater Boston’s skateboard and athletic community,” said Energy and Environmental Affairs Secretary Maeve Vallely Bartlett. “I thank everyone for their hard work in making this project a reality.”

An urban skate park in the Greater Boston area was first initiated by the Charles River Conservancy (CRC) President Renata von Tscharner, and sculptor Nancy Schon, famous for her Tortoise and the Hare sculptures in Copley Square and her Make Way for Ducklings sculptures in the Boston Public Garden. When the artist learned skateboarders were utilizing sculptures as a place to practice because they were limited to space, she partnered with the Charles River Conservancy to create a solution for skaters.

For more than a decade, CRC has worked with DCR and supporters toward the creation of an urban skatepark that will cater to athletes of all levels, including skateboarders, BMX riders, in-line skaters, scooter riders and athletes in wheelchairs, while also serving as a venue for professional skating events. Vans supported the project with $1.5 million, in addition to annual funding of $25,000 for seven years to DCR for ongoing maintenance of the skatepark.

“The effort to build such a monumental facility in the Boston area has overcome many hurdles, but more importantly, was met with support from those who care about the future of the Boston area as a center for creativity and innovation,” said von Tscharner. “The Lynch Foundation and Vans stepped up to become key partners for this civic project. We could not move forward without their generous contribution and partnership.”

“Vans is very excited to be back in Boston decades after my father began his career in the footwear business,” said Steve Van Doren, Vans vice president of events and promotions and son of Vans founder Paul Van Doren. “Nearly 50 years ago, skateboarders and BMX riders adopted Vans as their shoe of choice and it’s an honor to return to my family’s roots to help support the creation of a skatepark that will be open to all.” 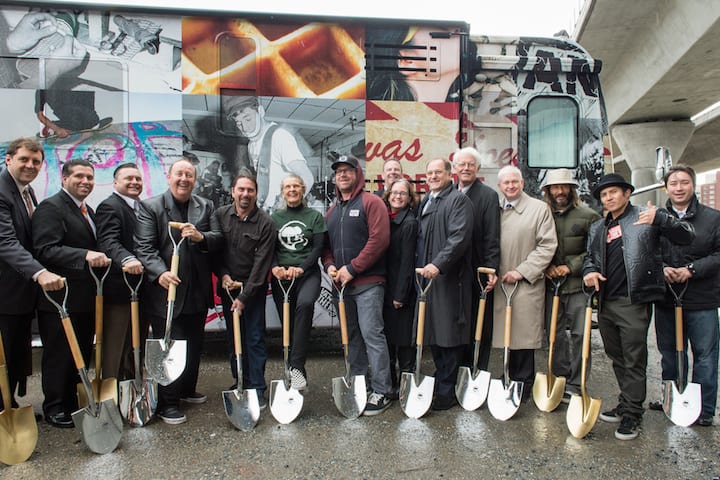 The Lynch Foundation’s support has also been critical to the skatepark’s development.

“We supported the Conservancy for this skatepark because Boston’s youth need a place to practice and showcase their athletic skills,” said Carolyn Lynch of the Lynch Foundation. “We applaud the Conservancy for working with the State in this public – private endeavor on this challenging site.”

“The skatepark project is an innovative use of public space that will play a significant role in the ongoing rejuvenation of the parklands along the Charles River,” said DCR Commissioner Jack Murray.  “We’re excited to add this skatepark to our diverse array of outdoor recreational opportunities, which range from spray parks to hiking trails to hockey rinks and more.”

A seed grant of $5,000 from the Tony Hawk Foundation launched the skatepark fundraising efforts in 2003. CRC has raised over $3 million for the skatepark, joined by other generous contributors like the Lynch Foundation, City of Cambridge and Boston Redevelopment Authority. The project has also received support from more than 400 skaters and their parents, who helped design the park and donated what they could to support the development.

The Lynch Family Skate Park is designed by the engineering, architecture and design firm Stantec and landscape architecture firm Halvorson Design Partnership, Inc. Mike McIntyre of Stantec’s Action Sport group played an instrumental role in designing the park. McIntyre is a former professional skateboarder who has built more than 150 skateparks around the country and overseas.

“When completed, the Lynch Family Skatepark will be a creative public recreation space that will serve skaters and riders from around the region. This project has received significant support from the City of Cambridge and from private donors like Vans and the Lynch Foundation, and without their generosity construction of the skatepark would not be possible,” said State Representative Timothy Toomey.  “I also commend Governor Patrick for his continued commitment to urban park development, and I’m confident that the Lynch Family Skatepark will be a positive addition to our community.”

“I am thrilled to see this skate park become a part of our community after such a thoughtful public process,” said Cambridge Mayor David Maher. “The Lynch Family Skate Park will add to the vitality and excitement of North Point and is another crucial step in the continued evolution of this new Cambridge neighborhood. This will be an exciting and unique destination for generations of Cambridge residents and for many of our area neighbors for decades to come.”

“As an advocate for the preservation and active use of open space, I’m delighted to see the vision of the CRC and the skatepark’s supporters coming to fruition, said Cambridge City Councilor Leland Cheung.  “This resource will provide countless youth the opportunity to practice their sport in a safe, scenic, and community-friendly setting. As someone who grew up skateboarding with friends, I’m looking forward to dusting off my Tony Hawk skateboard and inaugurating the park with a kickflip.”

“I’m very excited that the skatepark will finally be moving forward,” said Cambridge City Councilor Marc McGovern. “This is going to be a great asset for the youth of Cambridge and surrounding areas.

“This Urban Skatepark will be a fabulous resource for thousands of kids of all ages in and around Cambridge,” said Cambridge City Councilor Craig Kelley. “It shows how a dedicated group of people with a vision of the possible can take what others would view as a wasteland and turn it into something that will help people enjoy the outdoors in all of its varied ways.  This is a super exciting opportunity and I can’t wait to shred it.”

Since taking office, Governor Patrick has made a historic investment of more than $360 million in land conservation focused on three goals: investing in urban parks, preserving working farms and forests and protecting large natural landscapes for habitat. This investment has resulted in the permanent protection of more than 125,000 acres of land and the renovation or creation of more than 190 parks. The new parks and open space created are within a 10 minute walk of 1.5 million residents – about a quarter of the Commonwealth’s population.

Vans®, a VF Corporation (NYSE: VFC) brand, is the original action sports footwear and apparel brand.  Vans collections include authentic footwear, apparel, accessories and snowboard boots that are sold globally in more than 170 countries through a network of subsidiaries, distributors and international offices. VF Outdoor, Inc. owns and operates more than 415 stores of the Vans brand in the United States and internationally, each offering a range of Vans footwear and apparel while communicating the brand’s rich heritage. The Vans brand promotes the action sports lifestyle, youth culture and creative self-expression through the support of musicians, artists and athletes on boards and bikes all over the globe and through progressive events such as the Vans Triple Crown of Surfing®, the Vans Downtown Showdown, the Vans Pool Party, the Vans Warped Tour® and surfing’s most prestigious contest, the Vans US Open of Surfing.  Vans, “Off the Wall” Since ’66 www.vans.com facebook.com/vans twitter.com/vans

About the Charles River Conservancy

Founded in 2000, The Conservancy has over 25,000 supporters and volunteers, The Conservancy’s programs include returning swimming to the River, employing 2,000 landscape volunteers annually, improving the river paths, building underpasses, illuminating bridges, and offering the Sunday Parkland Games The Conservancy, with the help of private donors, often partners with DCR and MassDOT to implement civic projects and programs.