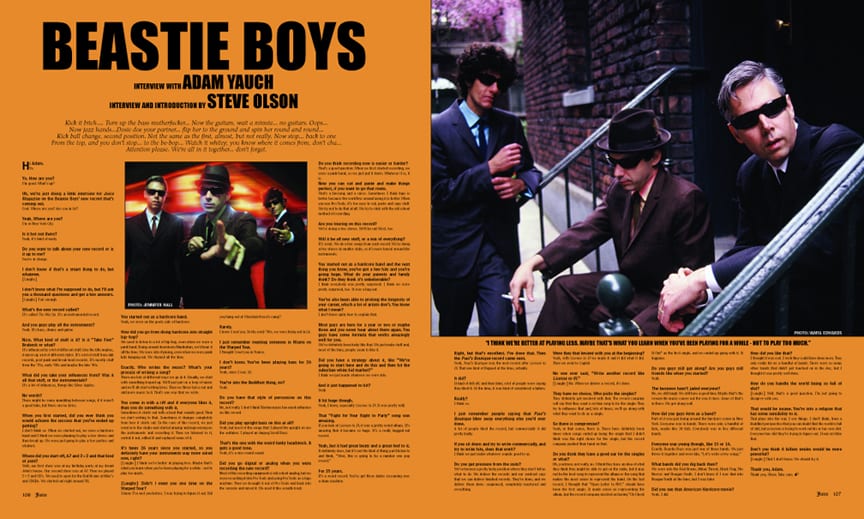 Kick it… Turn up the bass… Now the guitars, wait a minute… no guitars. Oops… Now jazz hands…Dosie doe your partner… flip her to the ground and spin her round and round… Kick ball change, second position. Not the same as the first, almost, but not really. Now stop… back to one. From the top, and you don’t stop… to the be-bop… Watch it whitey, you know where it comes from, don’t cha… Attention, please. We’re all in it together… don’t forget.

“I THINK WE’RE BETTER AT PLAYING LESS. MAYBE THAT’S WHAT YOU LEARN WHEN YOU’VE BEEN PLAYING FOR AWHILE – NOT TO PLAY TOO MUCH.”

Uh, we’re just doing a little interview for Juice Magazine on the Beastie Boys’ new record that’s coming out.
Cool. Where are you? Are you in LA?

Yeah. Where are you?
I’m in New York City.

Is it hot out there?
Yeah, it’s kind of nasty.

Do you want to talk about your new record or is it up to me?
You’re in charge.

I don’t know if that’s a smart thing to do, but whatever.
[Laughs]

I don’t know what I’m supposed to do, but I’ll ask you a thousand questions and get a few answers.
[Laughs] Fair enough.

And you guys play all the instruments?
Yeah. It’s bass, drums and guitar.

What did you take your influences from? Was it all that stuff, or the instrumentals?
It’s a lot of influences, things like Silver Apples.

No words?
There might be some mumbling between songs, if it wasn’t a good take, but there are no lyrics.

When you first started, did you ever think you would achieve the success that you’ve ended up getting?
I don’t think so. When we started out, we were a hardcore band and I think we were planning to play a few shows and then break up. We were just going to play a few parties and whatnot.

Where did you start off, A7 and 2+2 and that kind of joint?
Well, our first show was at my birthday party at my friend John’s house. Our second show was at A7. Then we played 2+2 and CB’s. We used to open for the Bad Brains at Max’s and CBGBs. We started out right around ’81.

You started out as a hardcore band.
Yeah, we were on the goofy side of hardcore.

Exactly. Who writes the music? What’s your process of writing a song?
There are lots of different ways we go at it. Usually, we start with something looped up. We’ll just put on a loop of music and we’ll all start writing lyrics. Then we throw lyrics out and add more music to it. That’s one way that we write.

You come in with a riff and if everyone likes it, then you do something with it.
Sometimes it starts out with a beat that sounds good. Then we start writing to that. Sometimes it changes completely from how it starts out. In the case of this record, we just went in to the studio and started playing and improvising on the instruments and recording it. Then we listened to it, sorted it out, edited it and replayed some of it.

It’s been 26 years since you started, so you definitely have your instruments way more wired now, right?
[Laughs] I think we’re better at playing less. Maybe that’s what you learn when you’ve been playing for a while – not to play too much.