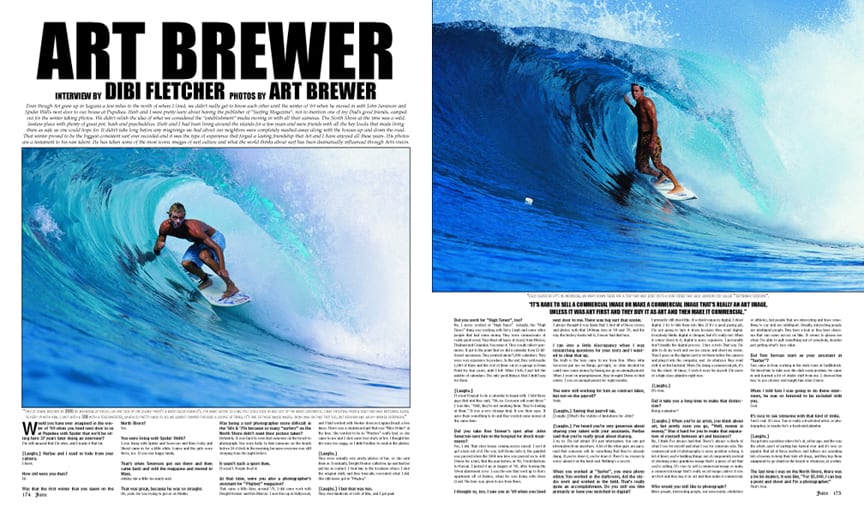 Even though Art grew up in Laguna a few miles to the north of where I lived, we didn’t really get to know each other until the winter of ’69 when he moved in with John Severson and Spider Wells next door to our house at Pupukea. Herb and I were pretty leery about having the publisher of Surfing Magazine, not to mention one of my Dad’s good friends, camped out for the winter taking photos. We didn’t relish the idea of what we considered the establishment media moving in with all their cameras. The North Shore at the time was a wild, lawless place with plenty of great pot, hash and psychedelics. Herb and I had been living around the islands for a few years and were friends with all the key locals that made living there as safe as one could hope for. It didn’t take long before any misgivings we had about our neighbors were completely washed away along with the houses up and down the road. That winter proved to be the biggest consistent surf ever recorded and it was the type of experience that forged a lasting friendship that Art and I have enjoyed all these years. His photos are a testament to his raw talent. He has taken some of the most iconic images of surf culture and what the world thinks about surf has been dramatically influenced through Art’s vision.

Would you have ever imagined in the winter of ’69 when you lived next door to us at Pupukea with Spider that we’d be sitting here 37 years later doing an interview?
I’m still amazed that I’m alive, and I made it that far.

[Laughs.] Herbie and I used to hide from your camera.
I know.

Was that the first winter that you spent on the North Shore?
Yes.

That’s when Severson got out there and then came back and sold the magazine and moved to Maui.
Johnny ate a little too much acid.

That was great, because he was so straight.
Oh, yeah. He was trying to get us on Ritalin.

Was being a surf photographer more difficult in the ’60s and ’70s because so many surfers on the North Shore didn’t want their picture taken?
Definitely. It was hard to even find someone on the beach to photograph. You were lucky to find someone on the beach before 10 o’clock in the morning, because everyone was still sleeping from the night before.

It wasn’t such a sport then.
It wasn’t. People lived it.

At that time, were you also a photographer’s assistant for ‘Playboy’ magazine?
That came a little later, around ’75. I did some work with Dwight Hooker and Ken Marcus. I met Ken up in Hollywood, and I had worked with Hooker down in Laguna Beach a few times. There was a skateboard girl that was ‘Miss Hobie’ at the time. She wanted to be in ‘Playboy’ really bad, so she came to me and I shot some test shots of her. I thought her tits were too saggy, so I didn’t bother to send in the photos.

[Laughs.]
They were actually very pretty photos of her, so she sent them in. Eventually, Dwight Hooker called me up and had me put her in contact. I took him to the locations where I shot the original stuff, and they basically recreated what I did. She still never got in ‘Playboy’.

[Laughs.] I bet that was fun.
They shot hundreds of rolls of film, and I got paid.

Did you work for ‘High Times’, too?
No, I never worked at ‘High Times’. Actually, the ‘High Times’ thing was working with Terry Lamb and some other people that had some money. They were connoisseurs of really good weed. They liked all types of weed, from Mexico, Thailand and Columbia. You name it. They would collect specimens. It got to the point that we did a calendar from 12 different specimens. They printed about 5,000 calendars. They were very expensive to produce. In the end, they sold maybe 1,000 of them and the rest of them sat in a garage in Dana Point for four years, until I left. When I left, I just left the palette of calendars. The only good thing is that I didn’t pay for them.

[Laughs.]
It wasn’t logical to do a calendar to begin with. I told those guys that and they said, ‘Oh, no. Everyone will want these.’ I was like, ‘Well, they’re not smoking them. They’re looking at them.’ It was a very strange deal. It was their egos. It gave them something to do and they wasted some money at the same time.

Did you take Ron Stoner’s spot after John Severson sent him to the hospital for shock treatments?
Yes, I did. That story keeps coming across mixed. I sort of get a kick out of it. The way Jeff Divine tells it, the gauntlet was passed when the 1000 mm lens was passed on to Jeff. I know for a fact, that the year before, in ’69, I took that lens to Hawaii. I picked it up in August of ’69, after leaving the Weed Abatement crew. I was the one that went up to Ron’s apartment off of Robles, when he was living with Steve Crawl. The lens was given to me from there.

I thought so, too. I saw you in ’69 when you lived next door to me. There was big surf that winter.
I always thought it was funny that I shot all of these covers and photos with that 1000mm lens in ’69 and ’70, and the way the history books tell it, I never had that lens.

I ran into a little discrepancy when I was researching questions for your story and I wanted to clear that up.
The truth is the lens came to me from Ron. When John Severson put me on things got tight, so John decided he could save some money by having me go on unemployment. When I went on unemployment, they brought Divine in that winter. I was on unemployment for eight months.

You were still working for him as contract labor, but not on the payroll?
Yeah.

[Laughs.] Saving that payroll tax.
[Laughs.]What’s the statute of limitations for John?

[Laughs.] I’ve heard you’re very generous about sharing your talent with your assistants. Herbie said that you’re really great about sharing.
I try to. I’m not afraid. It’s just information. You can get information from anywhere. A lot of the other guys are paranoid that someone will do something that they’re already doing. If you’ve done it, you’ve done it. There’s no reason to worry about it on the back end. Nothing’s a secret.