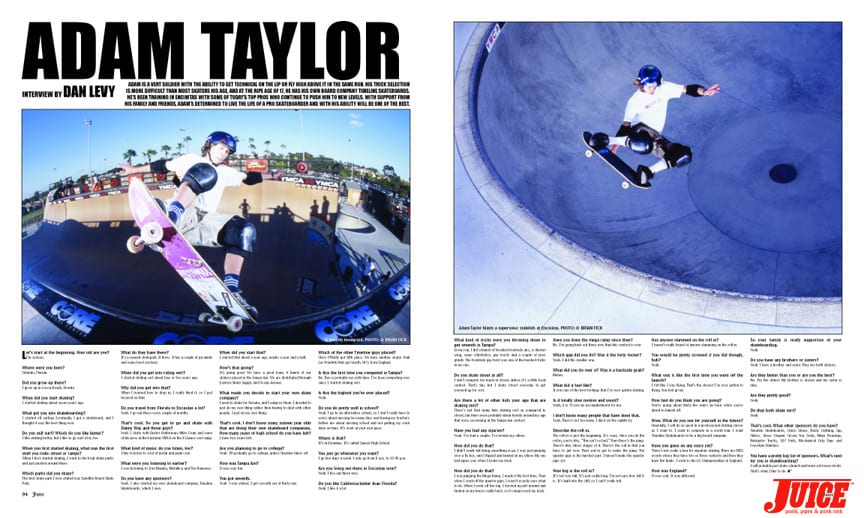 Adam is a vert soldier with the ability to get technical on the lip or fly high above it in the same run. His trick selection is more difficult than most skaters his age, and at the ripe age of 17, he has his own board company Timeline skateboards. He’s been training in Encinitas with some of today’s top pros who continue to push him to new levels. With support from his family and friends, Adam is determined to live the life of a pro skateboarder and with his ability will be one of the best.

“I started off surfing. Eventually, I got a skateboard, and I thought it was the best thing ever.”

Let’s start at the beginning. How old are you?
I’m sixteen.

Where were you born?
Orlando, Florida.

Did you grow up there?
I grew up in Cocoa Beach, Florida.

When did you start skating?
I started skating about seven years ago.

What got you into skateboarding?
I started off surfing. Eventually, I got a skateboard, and I thought it was the best thing ever.

Which parks did you skate?
The first skate park I ever skated was Satellite Beach Skate Park.

What do they have there?
It’s a cement skatepark. It flows. It has a couple of pyramids and some bowl sections.

When did you get into riding vert?
I started skating vert about four or five years ago.

Why did you get into that?
When I learned how to drop in, I really liked it, so I just focused on that.

Do you travel from Florida to Encinitas a lot?
Yeah. I go out there every couple of months.

That’s cool. So you get to go and skate with Danny Way and those guys?
Yeah. I skate with Buster Halterman, Mike Crum and some of the pros at the Encinitas YMCA on the X Games vert ramp.

What kind of music do you listen, too?
I like to listen to a lot of metal and punk rock.

Do you have any sponsors?
Yeah. I also started my own skateboard company, Timeline Skateboards, which I own.

When did you start that?
I started that about a year ago, maybe a year and a half.

How’s that going?
It’s going good. We have a good team. A bunch of our skaters placed in the Tampa Am. We are distributed through Eastern Skate Supply and Ocean Avenue.

That’s cool. I don’t know many sixteen year olds that are doing their own skateboard companies. How many years of high school do you have left?
I have two years left.

How was Tampa Am?
It was way fun.

You got seventh.
Yeah. I was stoked. I got seventh out of thirty-one.

Which of the other Timeline guys placed?
Chris O’Reilly got fifth place. We have another skater Paul Luc Pendetti that got fourth. He’s from England.

Is this the first time you competed in Tampa?
No. This is probably my sixth time. I’ve been competing ever since I started skating vert.

Is this the highest you’ve ever placed?
Yeah.

Do you do pretty well in school?
Yeah. I go to an alternative school, so I don’t really have to worry about missing too many days and having my teachers bother me about missing school and not getting my work done on time. It’s work at your own pace.

Where is that?
It’s in Encinitas. It’s called Sunset High School.

Are you living out there in Encinitas now?
Yeah. I live out there now.

What kind of tricks were you throwing down to get seventh in Tampa?
In my run, I did a bunch of tweaked frontside airs, a chicken wing, some stalefishes, gay twists and a couple of nose grinds. The frontside gay twist was one of the hardest tricks in my run.

Do you skate street at all?
I don’t compete too much in street, unless it’s a little local contest. That’s fun, but I skate street everyday to get warmed up for vert.

Are there a lot of other kids your age that are skating vert?
There’s not that many kids skating vert as compared to street, but there were probably about twenty around my age that were sessioning at the Tampa Am contest.

Have you had any injuries?
Yeah. I’ve had a couple. I’ve broken my elbow.

How did you do that?
I didn’t really fall doing something crazy. I was just jumping over a fly box, and I flipped and landed on my elbow. My one bad injury was when I broke my back.

How did you do that?
I was jumping the Mega Ramp. I made it the first time. Then when I went off the quarter pipe, I wasn’t exactly sure what to do. When I went off the top, I twisted myself around and landed on my knees really hard, so it compressed my back.

Have you done the mega ramp since then?
No. I’m going back out there now that this contest is over.

Which gap did you do? Was it the forty-footer?
Yeah. I did the smaller one.

What did you do over it? Was it a backside grab?
Melon.

What did it feel like?
It was one of the best feelings that I’ve ever gotten skating.

Is it totally slow motion and weird?
Yeah, it is. It was an accomplishment for me.

I don’t know many people that have done that.
Yeah. There’s not too many. I did it on the eighth try.

How big is the roll in?
It’s not very tall. It’s just really long. I’m not sure how tall it is. It’s built into the cliff, so I can’t really tell.

You would be pretty screwed if you did though, huh?
Yeah.

What was it like the first time you went off the launch?
I felt like I was flying. That’s the closest I’ve ever gotten to flying. You feel great.

How fast do you think you are going?
You’re going about thirty-five miles an hour when you’re about to launch off.

Wow. What do you see for yourself in the future?
Hopefully, I will do as good in a professional skating career as I want to. I want to compete in a world tour. I want Timeline Skateboards to be a big board company.

Have you gone on any tours yet?
There’s not really a tour for amateur skating. There are MSS events where they have two or three contests and then they have the finals. I went to the LG Championships in England.

How was England?
It was cool. It was different.

So your family is really supportive of your skateboarding.
Yeah.

Do you have any brothers or sisters?
Yeah. I have a brother and sister. They are both skaters.

Are they better than you or are you the best?
No. I’m the oldest. My brother is eleven and my sister is nine.

Are they pretty good?
Yeah.

Do they both skate vert?
Yeah.

You have a pretty big list of sponsors. What’s next for you in skateboarding?
I will probably just skate a bunch and learn a lot more tricks. That’s what I like to do.

FOR THE REST OF THE STORY, ORDER ISSUE #60 BY CLICKING HERE…