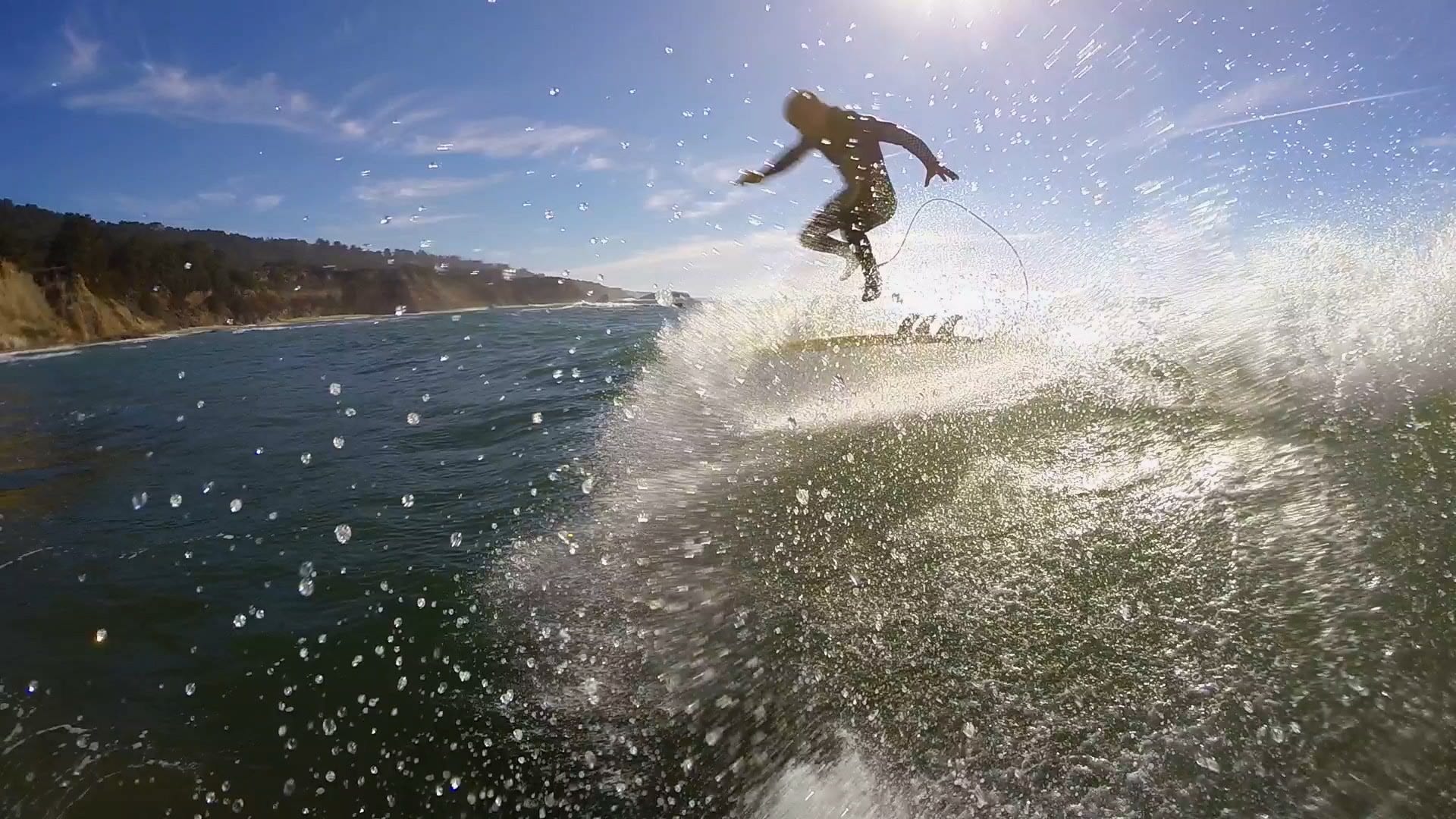 The kickflip master, a revolutionist for surfing, bringing surfing far into the future introducing flip tricks and making what we all thought was impossible possible.

Let’s jump into this thing. I just saw a video of you doing two kickflips on one wave. What’s up with that? Where do you come up with the idea to do a kickflip on a surfboard?

Well, it’s kind of a gnarly story. Prior to 2011, I was surfing with my good friend, Carl Reimer and he told me, joking around, “You need to pull that trick and do the kickflip and do it all the time.” I was like, “Oh, whatever. I don’t even care.” Then he left my house and got shot to death and that was the last thing he ever told me. After that I was really determined to do it. I didn’t care if I broke myself. I broke like 50 boards on my face. I’m chewed up right now and I have ten stitches in my arm and I’ve been stabbed in the eye by my surfboard and I couldn’t see for like three days. I wanted to make it my goal to make it like, “Hey, this is the Reimer kickflip.” I wanted to help kids to pull tricks, not triggers, you know?

I had a life changing experience that led me on this thing to want to do a kickflip on a surfboard and do revolutionary surfing.

That’s sick, dude. When did you stomp your first one?

There you go. There was that $10,000 Volcom kickflip challenge.

Yeah. They gave me the money for that. They said, “Oh, okay, you didn’t do it the way you wanted, but we’re going to give you money.” Everyone around the world spoke up for me and said, “This kid stuck it.” So then they made the $20,000 contest and every month I sent in three kickflips that I pulled, and then I got this really good one and I posted it. Of all people, your dad commented, “You guys are high if you think this is not above the lip.” Volcom called me and said I didn’t come enough off the lip or something weird like that and then they told me that they ended the contest. I was determined though so I kept sending them in. They sent me three emails back saying, “Zoltan, we told you the contest is over.” I’m like, “Well, you’ve got to tell everyone.” They never really told anyone, so I just kept sending them clips of my kickflips, and I’m still sending them in. They said that I was the only one to enter the contest for two years, so they ended the contest because of me. Online it says, it will go on until there is a winner. It was one of those things where I just had to deal with it.

That’s still sick that you busted one out, especially for the homie.

That’s interesting. I knew there was more to it. Do you skate at all?

I skate all the time. I do a lot of surf skating too. I actually skated for SMA Skateboards for Skip Engblom. He’s one of my big time early supporters and one of my dear friends that kept me going as a kid and believed in me when I was younger when I was doing the air shows and everything.

That’s super sick. Can you do a kickflip on a skateboard?

Yeah. In fact, just yesterday, I helped out Rick teaching a surf lesson and then, afterwards, he made me try a kickflip on a Doyle in front of everyone and I almost got it and then I came in and landed one on my skateboard in front of the whole class, and I skated up to them after I landed it and said. “It’s just like a wave.” They were all pumped.

That’s rad. I figured you had to do them on skateboards if you can do them on a surfboard, which is much harder. Is it similar at all? Does it feel the same?

I know you’re a surfer. I remember that day we were out at the Point and you did that shove-it darkslide thing. That was sick.

You know what? That was an inspirational day. Some barney laughed at me like, “Oh, you’re going to surf and film?” Then you came out and did 20 straight ups through the white water. You were just making it look way too sick. I got a kickflip and then that guy was looking at me like, “Oh, maybe I’m just a kook.”

[Laughs] That was a good day.

Yeah. That was awesome.

Have you been messing around with any other flip tricks?

I am actually. I have been trying to get some finger flips. I’ve also done a finger flip board transfer. I jumped off a cliff and finger flipped a few times. I’m working on my kickflip to switch. I have a couple of tricks right now and I’m working on some other ones like the back foot switch foot kickflip. I almost got that a few times in front of my buddy, Elijah.

That’s the next thing.

I just feel like you busting out the kickflip on a surfboard is bringing surfing to a whole new level. I think there is going to start to be a lot of flip tricks in the future and it’s rad that you started it.

I can’t believe it. I keep thinking I’m going to wake up, like it’s a dream or something because I’ve been wanting to do a kickflip since I was a little kid. People always laughed at me when I’d say that I wanted to do a pop shove-it and all these skateboard tricks. Even now if I said that I want to do varial tricks, people would laugh at me, but I just want to do it. I’m going to do it, but I just keep it quiet. It’s like saying that you are going to see the Loch Ness monster. People are like, “Bullshit, dude.” You just have to keep going.

Have you had any help or support through all of this? Are people flowing you boards or what? I know you go through a lot of boards if you’re doing kickflips on a surfboard.

You know I’m really lucky that I’ve got Vernor Surfboards flowing me boards. I did the first kickflip wake surfing my fourth time wake surfing and I felt like a leprechaun, I was so lucky that day. I don’t know how I pulled that. It was so heavy. The driver was named Carlton and I started screaming “Carl!” and I’d only met him for an hour. I was tripping out and crying and I was telling all my friends. They were like, “This is so heavy.” They didn’t realize that they were part of something that was maybe bigger than they realized when they met me, you know? Now I’m involved with Evercarve wakesurf boards and I’ve got my own model coming out for wake surfing and I’m working with MB boats. I’ve got support from those guys and I have really good support from Elijah Crowell, who filmed all those clips of the kickflips. Elijah and I have been friends since we were three and two years old, trying to stand up on our boogie boards. He surfs Mavericks and stuff like that too, so he’s rad.

That’s super rad, dude. That’s good that you have a support system.

Yeah. It’s the original team from playing in the sandbox, you know? It’s super cool.

Do you have anything else you want to say about the kickflips?

I just want to inspire people to believe that anything is possible if you work hard and put your mind to it. Pull tricks, not triggers. Put it out there in a positive way instead of a negative way. We all have that warrior spirit in us. It’s how we use that craziness that makes the difference.

That’s badass. I’m all about that. We’ve got to get the kids stoked.

Yeah. Me and you are really lucky that we were exposed to surfing. A lot of kids aren’t. They’re all super amped out and they don’t know what to do and they do something dumb just because they’re trying to be cool and do something fun and exciting. There are positive ways to do it through music, surfing and skating and art and it goes on and on.

Exactly. That’s what’s up. Thank you.

One last question. What’s the best board to try doing kickflips on? What’s your favorite equipment and what are you riding when you pull these?

I just like to ride real surfboards, pretty much a normal standard 5’10” Vernor Surfboard. People always trip out like, “Why doesn’t he ride this weird double skateboard-type surfboard?” What people don’t realize is that we are actually surfing and you need to have a surfboard to surf. I’ve tried all these weird boards and they don’t surf. You need to be able to surf and go fast and boost airs and do floaters and get the lip to barrel to do the kickflip. It’s a functional move, so you need a functional surfboard. I’d say you could do it on whatever surfboard the ASP surfers are riding. You just need a good surfboard, like a 5’10” or 5’7”. I live in Santa Cruz, so it’s different. You just need a standard short board with a squash tail and a nice rail. You know what we like.

Exactly. I like that you’re doing them like that because it brings it more into a functional maneuver where you can do a kickflip and then you could do a turn and go down the line instead of just doing the kickflip.

You have to make real sections up here and you need to be able to go fast. You can’t be riding some little chintzy board and thinking you’re going to be able to do some trick. It just doesn’t work like that.

Yeah. Elijah will go shoot us. He will be stoked. He’s been going out doing all the XXL stuff too. It will be fun.

I need to come up there and get some surf. Thank you.

Thank you, buddy. Thanks for your time. I’m super stoked.

Above the lip kickflips:

GoPro of the World submissions:

Thank you to Seven Adams, Zoltan Torkos and Elijah Crowell at santacruzphotos.com