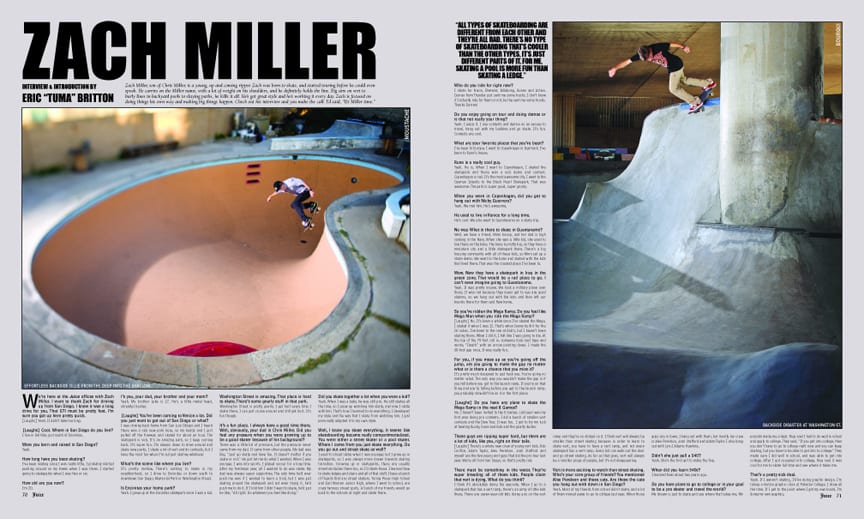 Zach Miller, son of Chris Miller, is a young, up and coming ripper. Zach was born to skate, and started touring before he could even speak. He carries on the Miller name, with a lot of weight on his shoulders, and he definitely holds the line. Big airs on vert to burly lines in backyard pools to slaying parks, he kills it all. He’s got great style and he’s working it every day. Zach is focused on doing things his own way and making big things happen. Check out his interview and you make the call. I’d said, “It’s Miller time.”

We’re here at the Juice offices with Zach Miller. I want to thank Zach for driving up from San Diego. I know it was a long drive for you. That GTI must be pretty fast. I’m sure you got up here pretty quick.
[Laughs] Yeah. It didn’t take too long.

[Laughs] Cool. Where in San Diego do you live?
I live in Del Mar, just south of Encinitas.

Were you born and raised in San Diego?
Yeah.

How long have you been skating?
I’ve been skating since I was really little. I probably started pushing around on my knees when I was three. I started going to skateparks when I was five or six.

It’s you, your dad, your brother and your mom?
Yeah. My brother Luke is 17. He’s a little metal head, shredder hesher.

[Laughs] You’ve been coming to Venice a lot. Did you just want to get out of San Diego or what?
I was driving back home from San Luis Obispo and I heard there was a sick new park here, so my buddy and I just pulled off the freeway and skated for about an hour. The skatepark is sick. It’s an amazing park, so I keep coming back. It’s super fun. I’m always down to drive around and skate new parks. I skate a lot of vert and do contests, but I have the most fun when I’m out just skating whatever.

What’s the scene like where you live?
It’s pretty mellow. There’s nothing to skate in my neighborhood, so I drive to Encinitas or down south to downtown San Diego, Memorial Park or Washington Street.

Is Encinitas your home park?
Yeah. I grew up at the Encinitas skatepark since I was a kid.

It’s a fun place. I always have a good time there. Well, obviously, your dad is Chris Miller. Did you feel any pressure when you were growing up to be a good skater because of his background?
There was a little bit of pressure, but the pressure never came from my dad. It came from other people. My dad was like, “Just go skate and have fun. It doesn’t matter if you skate or not.” He just let me do what I wanted. When I was younger, I was into sports. I played soccer for a long time. After my freshman year, all I wanted to do was skate. My dad was always super supportive. The only time he’d ever push me was if I wanted to learn a trick, but I was just skating around the skatepark and not even trying it, he’d push me to do it. If I told him I didn’t want to skate, he’d just be like, “All right. Do whatever you feel like doing.”

Did you skate together a lot when you were a kid?
Yeah. When I was a baby, he was still pro. He still skates all the time, so I grew up watching him skate, and now I skate with him. That’s how I learned to do everything. I developed my style and the way that I skate from watching him. I just personally adapted it to my own style.

Well, I know you skate everything. It seems like skateboarding became really compartmentalized. You were either a street skater or a pool skater. Where I come from you just skate everything. Do you go out and street skate as well?
I used to street skate when I was younger, but I grew up in skateparks, so I was always more drawn towards skating transition. Growing up in skateparks, there are usually street obstacles there too, so I’d skate those. I learned how to skate ledges and stairs and all of that stuff. I have a bunch of friends that are street skaters. Torrey Pines High School and Earl Warren Junior High, where I went to school, are crazy famous street spots. A bunch of my friends would go back to the schools at night and skate there.

Do you enjoy going on tour and doing demos or is that not really your thing?
Yeah. I enjoy it. I use contests and demos as an excuse to travel, hang out with my buddies and go skate. It’s fun. Contests are cool.

What are your favorite places that you’ve been?
I’ve been to Europe. I went to Copenhagen in Denmark. I’ve been to Rune’s house.

Rune is a really cool guy.
Yeah. He is. When I went to Copenhagen, I skated the skatepark and there was a sick demo and contest. Copenhagen is rad. It’s the most awesome city. I went to the Cayman Islands to the Black Pearl Skatepark. That was awesome. The park is super good, super gnarly.

When you were in Copenhagen, did you get to hang out with Nicky Guerrero?
Yeah. We met him. He’s awesome.

He used to live in Venice for a long time.
He’s cool. We also went to Guantanamo on a skate trip.

No way. What is there to skate in Guantanamo?
Well, we have a friend, Mimi Knoop, and her dad is high ranking in the Navy. When she was a little kid, she used to live there on the base. The base is pretty big, so they have a miniature city and a little skatepark there. There’s a big housing community with all of these kids, so Mimi set up a skate demo. We went to the base and skated with the kids that lived there. That was the craziest place I’ve been to.

Wow. Now they have a skatepark in Iraq in the green zone. That would be a rad place to go. I can’t even imagine going to Guantanamo.
Yeah. It was pretty insane. We took a military plane over there. It was rad because they never get to see any good skaters, so we hung out with the kids and then left our boards there for them and flew home.

So you’ve ridden the Mega Ramp. Do you feel like Mega Man when you ride the Mega Ramp?
[Laughs] No. It’s been a while since I’ve skated the Mega. I skated it when I was 15. That’s when Danny built it for the DC video. I’ve been to the one at Bob’s, but I haven’t been skating there. When I did it, I felt like I was going to die. At the top of the 70-foot roll in, someone took duct tape and wrote, “Death” with an arrow pointing down. I made the 60-foot gap once. It was really fun.