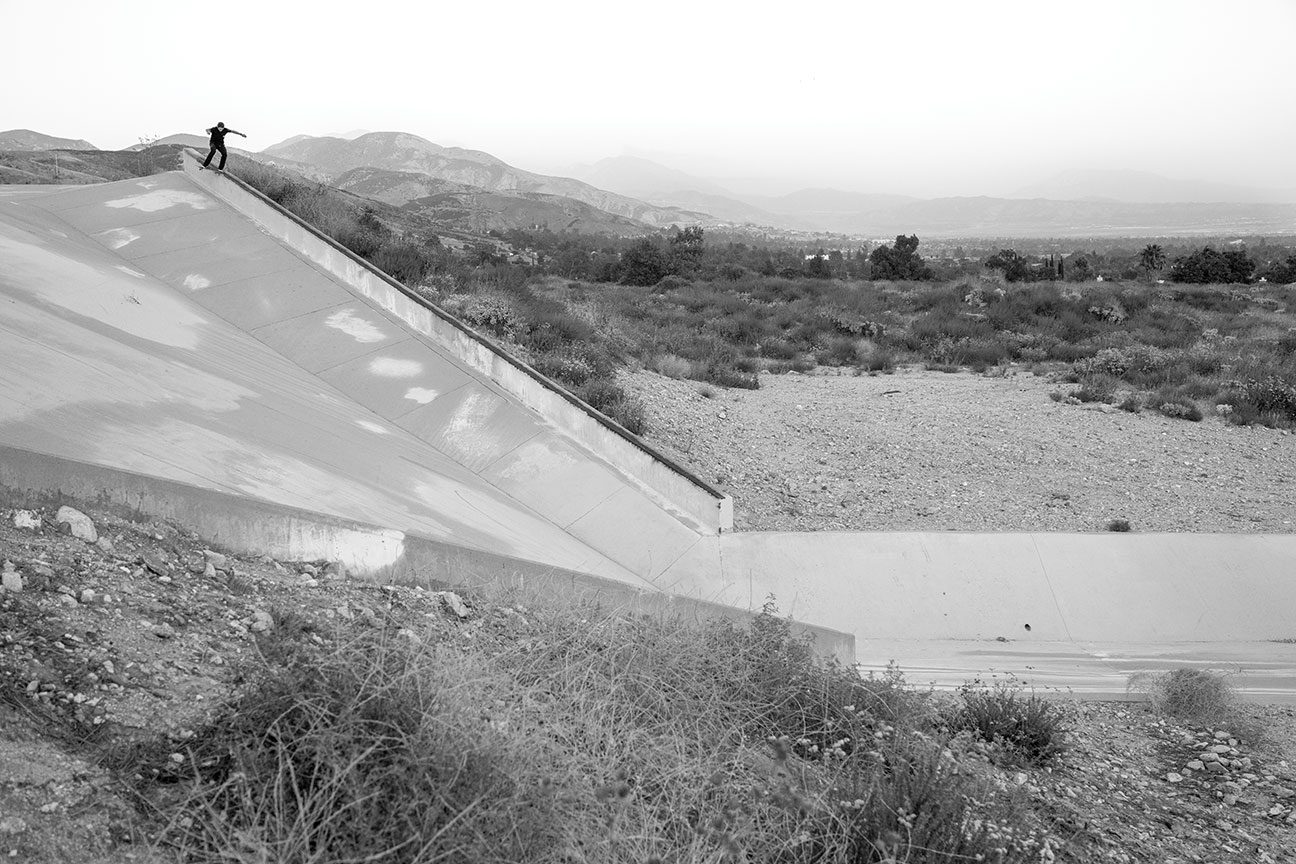 Zach, where do you come from?

Nice. How long have you been out here in California?

I moved out here when I was 20, so it’s been about seven years.

What was it like in Kansas City with the skate scene?

The skate scene there is sick because you have Sean Malto who brought a lot of attention to it. There are a lot of good skateparks there too. You wouldn’t think that, in the Midwest, but it’s actually really sick.

What made you move out here?

Where did you end up when you first moved here?

When I first moved here, I lived in Compton for three months. It was on Santa Fe, right next the Compton Skatepark. In the place where I lived in, the bed that I slept in was next to a wall with a bullet hole in it. It was pretty gnarly. Once it got dark, it was time to go home. I stuck out like a sore thumb being over there, but no one ever fucked with me. It was actually pretty mellow. Everyone was nice. Being from the Midwest, you hear stories about Compton being so scary, but it was okay. I don’t think anyone had any problem with me just walking around with my skateboard.

Skateboards are like the hood pass. So you lived in Compton and then what?

Well, I moved here with zero money and I was staying with a friend of a friend. Once I saved a bit of money, I moved to Long Beach.

Did you have a job?

Yeah. I just worked at a retail store and I worked enough hours to pay the rent and I was just skating as much as I could. It was crazy because I didn’t know anyone out here. I came out here with $200. Before I moved out here from Kansas City, I gave all of my stuff to my friends and I just packed as much as I could on my motorcycle. By the time, I got to California, I had no money because I spent it all on gas to get here. I was in Compton with no money and it was sketchy, but I had a chance to do something cool here.

How did you hook up with Powell?

That has been pretty recent. I met Deville about two years ago at Vans at the Block. We talked a    little bit then because he was friends with some of the people I was skating with. I was riding for Blind at the time, and that was looking like it was going to shape into something. Then, six months ago, I saw Deville at the Vans Skatepark again and we started talking. He said, “Send some footage over. We’re trying to rebuild the team.” So I figured I would give it a shot. Skating with the Powell guys is so sick. It’s a whole squad. No one takes skateboarding seriously, but they are all serious skateboarders.

Yeah. I ride for Fallen. That’s the main company that I’m working with and I’m super stoked on that. Jamie is not part of it anymore. Two Two4 Media is the group that runs it, so it’s Chad Foreman. He’s tied to Jamie in the sense that they ran it together, but he’s the total opposite. He’s the best. Daxter Lussier is the other guy and he’s an old pro skater. He’s super sick. He has a mini ramp in his yard and he kills that thing. Then it’s our homie Will O who does all the digital photography and stuff. They are the main dudes doing it and then there is a main distributor in Argentina. They were one of the old distributors and they ended up buying it, so it never stopped there. It’s taken off and it’s doing really good, so I’m excited. So I ride for Powell, Fallen, Bones Bearings, Kennedy Mfg, Arcade and Bones Love Milk.

“Before I moved out here from Kansas City,  I gave all of my stuff to my friends and I just packed as much as I could on my motorcycle. By the time, I got to California, I had no money because I spent it all on gas to get here. I was in Compton with no money and it was sketchy, but I had a chance to do something cool here.”

Sick! What would you say are your biggest challenges in life?

That’s a good way to be. Skateboarding helps with that because we are used to falling and getting up.

Exactly. We’re resilient people, so it will work out.

Are you into art or filmmaking too?

Yeah. I have a Sony A6000 that I bought about six months ago to shoot photos and today was the first time where I was starting to film because I want to start a YouTube channel, not like that vlog bullshit, but just for skating and being with my friends. I want to make edits from that. It’s been fun to use that to film. Learning Premiere Pro is overwhelming, but it’s rewarding when you get to export it and watch it and be like, “I filmed that and edited it.” It’s a headache, but it’s fun.

That is a good feeling. There are days where I just edit on my iPhone too.

I considered that. The first day I had Premiere Pro, I was like, “I don’t know if I want to do this.” There is so much shit and the menus are moving around and I’m hitting Control Z to get clips to go back into place and it doesn’t work. It’s definitely more complicated than iMovie, but then you can do cool things like set key frames and move things while you’re filming. It’s badass for sure.

If you were asked to describe your skate style, how would you describe it?

Everything. My girlfriend hates this because she will download an album and she will like all of the songs by an artist. I’m the opposite. I’ll only like one or two songs from an artist. I’m not going to buy a CD. If I go to a show, it’s rare because I’ll like one of a band’s songs and hate the rest. There are so many genres and only one or two songs from each that are great.

How do you pick a video part song then?

It’s tough. It goes hand in hand with my skating. I’m not really in one spot. I’m all over the place. Some people’s skating and music seems to go together, but I dabble in everything.

If you could have any super power, what would it be?

Super speed. I’d like to be able to control speed. Can you imagine skating in slow mo?

You’d be able to bail and not sack down rails. I think guys like Daewon have that.

I have a theory on that.

You know how you’ve got frame rates. People that are super good at sports and skateboarding see frame rates faster than other people.

Their brains are processing quicker. I believe you.

The level of control that guys like Daewon and Shane have, it’s due to something like that.

Yeah. Someone should study that. Definitely.

Where in the world have you been to skate?

I’ve been to almost all of the states in the country except Alaska and Hawaii. I’ve been to a few          European countries like Spain and Czech Republic. Places like Granada, Spain are super sick. It’s         incredible. If I could be rich and move somewhere, that’s the spot. It reminded me of the Midwest. It’s not what you think at all. When most people think of Spain, they think of Barcelona and the cities. It’s not like that at all. It’s rural Spain.

Where else would you like to go to skate?

I want to go to more European countries, and Asian countries like Japan and China with all of the marble ledges they have. I’d also like to go to the United Arab Emirates, like Dubai. It looks like there are cities that don’t even have people in them and they are all marble. That would be so sick.

Do you want to give any shout outs?

Thanks to Powell and all of my sponsors. I wouldn’t be doing any of this if it weren’t for my friends, my family and my sponsors. Thank you.