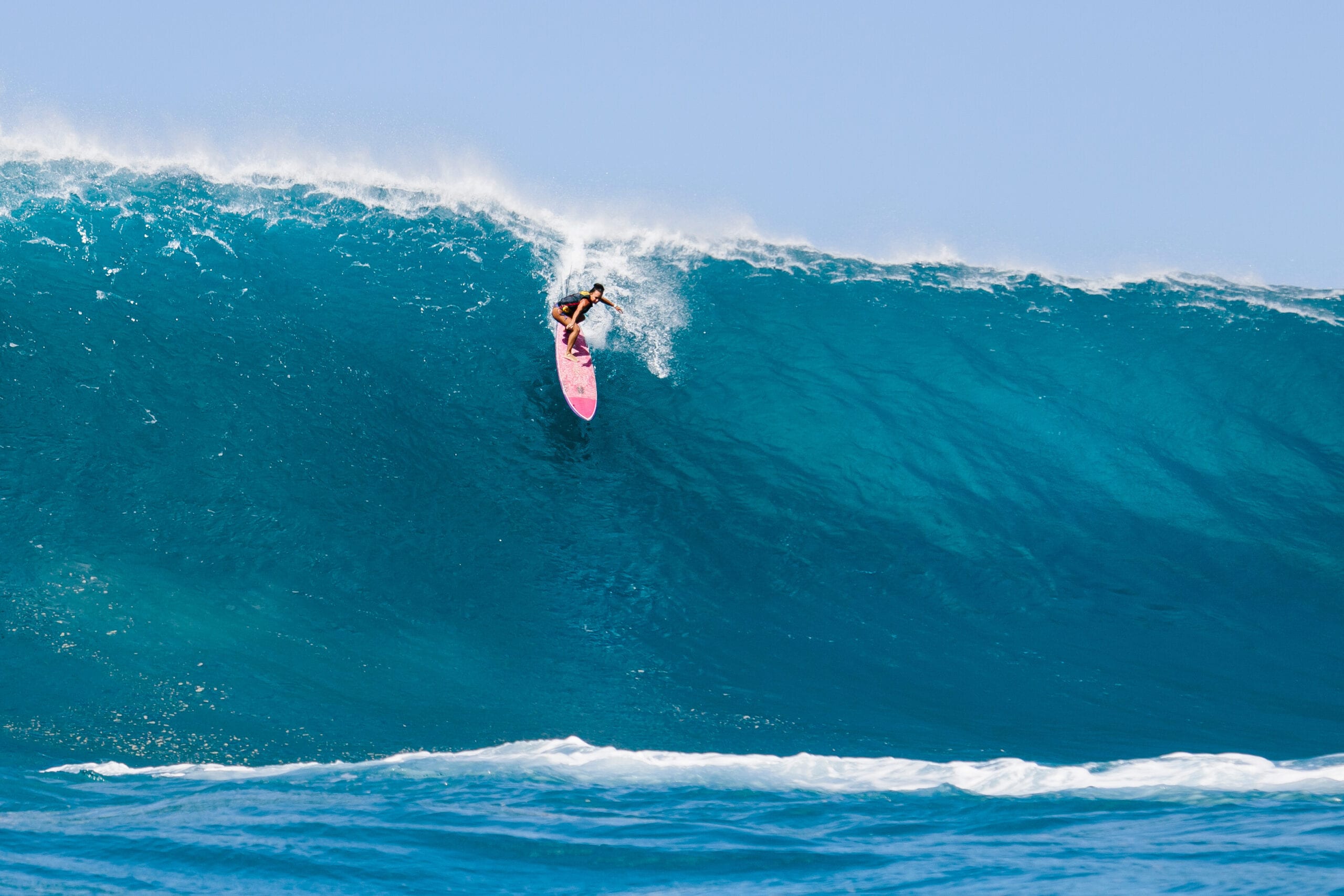 Women Make Their Mark in Big Waves at Magnitude

The North Shore season of 1957 is recognized in the surfing world as the start of an era. When Greg Noll, a young Mickey Munoz and company went out and rode Waimea for the first time, it was a glimpse of what could be in the world of big-wave surfing.

More than 60 years later, the winter of 2020-2021 will likely be looked at in the same manner as that fateful season of ’57. Thanks to an unlikely juxtaposition of health regulations that made live events impossible, a raging North Pacific and two dozen women who took part in Red Bull Magnitude, barriers were kicked down, and this winter changed the outlook of women’s big-wave forever.

“This year was definitely a milestone,” stated Kennelly, the 42-year-old pro-surfing veteran and winner of 2021 Red Bull Magnitude. The Kauai native surfed the World Championship Tour for a decade, dominating the heavy waves like Tahiti’s Teahupo’o, before leaving the tour to chase giant swells.

Kennelly took home the Overall Winner and Biggest Wave Awards (the latter for a bomb she caught on an Oahu outer reef), while Makani Adric was awarded Runner-Up and Emi Erickson was given the Best Ride Award for one of her many daring drops at Waimea Bay.

“It wasn’t solely because you had one of the biggest XXL swells of the decade [that made this year special], but also because Red Bull put on a specialty female big-wave event. Magnitude was a great concept that gave women a platform and the much lacking resources we needed,” Kennelly continued. “Having filmers and a jet ski safety team dedicated to us every time the contest would activate, gave women big-wave surfers the opportunity to push their limits with more confidence and then have video footage, not only to use to boost our profiles but also to review and learn from.”

With viral transmission still an issue last fall, Red Bull made the decision to shelf Queen of the Bay, the first-ever Waimea Bay big wave competition specifically for women. Since its inception in 2017, conditions have yet to materialize for Red Bull to run Queen of the Bay in person. No doubt, this would have gone off in glorious fashion during the allotted October/November window. But with the decision to hold a COVID-safe video submission event that began in time for the truly monster swell days, the women had an even greater platform to show what they had been working toward all these years.

“After years of getting everything together, it finally became reality,” said Adric. “So much has happened in the past year. A lot of people have been affected in many ways and it just feels like 2020 and the start of 2021 are such an odd year to work around. But when this winter season kicked off, the waves started firing.”

“Women’s big-wave surfing has seen this slow growth, but this year it was a huge jump,” observes Healey. “I think this year was a catalyst—having safety crews and filmers able to mobilize when those swells hit. It was a breakthrough year, specifically with the amount of different women at so many of these breaks.”

“It gave the wahine a chance to get some bombs on their time and with support. The format was definitely better than a one-day event with only two heats,” says Depolito.

The Northern Pacific Ocean did its thing. As each consecutive swell came marching down from the Aleutian Islands to the famed reefs and bays of those Norther-facing Hawaiian shorelines, the bravest braved the biggest days and the world, stuck in different stages of quarantine, watched in awe.

“My specific defining moment this year would have been surfing the swell on January 16,” remembers Adric, “I think it was such a defining moment for me because being out there in waves that size just felt unrealistic. The crowd and weather were great. I surfed for seven hours straight. It was one of the best days of my lifetime.”

In addition to the four awards voted on by the judges, a fifth award–the People’s Choice Award, presented by Yeti–was given to Adric, who was voted the most exciting surfer in the contest according to online fans.

Among other standouts were Polly Ralda, Kelta O’Rourke, Raquel Heckert and Justine Dupont, who all put in performances that put their signatures on the season.

And while a lot of the action was centered around Oahu, over on Maui, the exploits at Pea’hi (Jaws) gave a glimpse of the future of women in the heaviest of arenas.

“I was really impressed with some of the waves ridden at Jaws,” says Ballard, “That’s a whole other level of big-wave riding. Jaws isn’t just a drop. There’s a whole wave and a big thick barrel section. It’s a lot more to deal with and a lot more reward. I thought Justine DuPont and Paige Alms just caught such impressive waves there. Keala is always the most daredevil. She took some nasty beatings at Jaws. I don’t even know how long she was pummeled for. If she could have made some of those, they would have been her winning waves.”

Adric, who is among the leaders of the new generation of big-wave surfers, sees this as just the start of the momentum swing.

“When it comes to surfing and women supporting each other, it makes me happy seeing other girls rooting for one another. When I see other girls out surfing or trying their best doing what they love to do, it definitely inspires me to keep pushing forward and paving the way for the younger generations,” says Adric. “This year has absolutely been a milestone.”