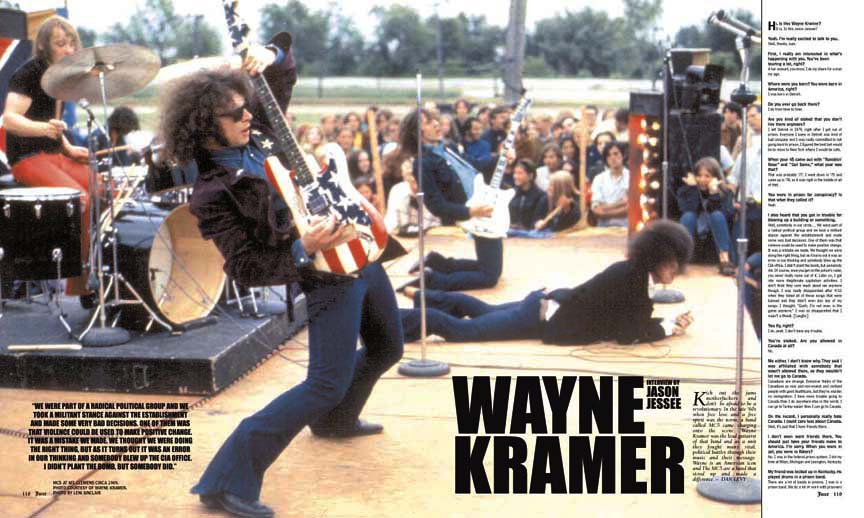 Kick out the jams and don’t be afraid to be a revolutionary. In the late ‘60s when free love and a free spirit was the norm, a band called MC5 came charging onto the scene. Wayne Kramer was the lead guitarist of that band and as a unit they fought many vital, political battles through their music and their message. Wayne is an American icon and The MC5 are a band that stood up and made a difference.

“WE WERE PART OF A RADICAL POLITICAL GROUP AND WE TOOK A MILITANT STANCE AGAINST THE ESTABLISHMENT AND MADE SOME VERY BAD DECISIONS. ONE OF THEM WAS THAT VIOLENCE COULD BE USED TO MAKE POSITIVE CHANGE. IT WAS A MISTAKE WE MADE. WE THOUGHT WE WERE DOING THE RIGHT THING, BUT AS IT TURNS OUT IT WAS AN ERROR IN OUR THINKING AND SOMEBODY BLEW UP THE CIA OFFICE. I DIDN’T PLANT THE BOMB, BUT SOMEBODY DID.”

Hi. Is this Wayne Kramer?
It is. Is this Jason Jessee?

Yeah. I’m really excited to talk to you.
Well, thanks, man.

First, I really am interested in what’s happening with you. You’ve been touring a lot, right?
A fair amount, you know. I do my share for a man my age.

Where were you born? You were born in America, right?
I was born in Detroit.

Do you ever go back there?
I do from time to time.

Are you kind of stoked that you don’t live there anymore?
I left Detroit in 1979, right after I got out of prison. Everyone I knew in Detroit was kind of bad company and I was really committed to not going back to prison. I figured the best bet would be to move to New York where I would be safe.

You were in prison for conspiracy? Is that what they called it?
Yeah.

I also heard that you got in trouble for blowing up a building or something.
Well, somebody in our circle… We were part of a radical political group and we took a militant stance against the establishment and made some very bad decisions. One of them was that violence could be used to make positive change. It was a mistake we made. We thought we were doing the right thing, but as it turns out it was an error in our thinking and somebody blew up the CIA office. I didn’t plant the bomb, but somebody did. Of course, once you get on the police’s radar, you never really come out of it. Later on, I got into more illegitimate capitalism activities. I don’t think they care much about me anymore though. I was really disappointed after 9/11 when they listed all of those songs that were banned and they didn’t even ban any of my songs. I thought, “Gosh, I’m not even in the game anymore.” I was so disappointed that I wasn’t a threat. [Laughs]

You’re stoked. Are you allowed in Canada at all?
No.

Me either. I don’t know why. They said I was affiliated with somebody that wasn’t allowed there, so they wouldn’t let me go to Canada.
Canadians are strange. Everyone thinks of the Canadians as nice and non-violent and civilized people with good healthcare, but they’re murder on immigration. I have more trouble going to Canada than I do anywhere else in the world. I can go to Turkey easier then I can go to Canada.

On the record, I personally really hate Canada. I could care less about Canada.
Well, it’s just that I have friends there.

I don’t even want friends there. You should just have your friends move to America. I’m sorry. When you were in jail, you were in Rikers?
No. I was in the federal prison system. I did my time at Milan, Michigan and Lexington, Kentucky.

That’s the coolest thing ever. My friend, Scott Manning, told me that he met you and went to your studio. He was really stoked. He said, “You won’t believe it. Wayne Kramer and the Jail Guitar Doors are super rad. They get instruments in prisons and it’s super positive. I was like, “Wait. Does that have anything to do with The Clash?” He was like, “I think so. Yeah.” I was like, “Oh, that’s great.” It couldn’t even be cooler than that.
Well, they wrote that song about me when I went to prison.

Did Joe Strummer write it?
Joe and Mick wrote it. They were good guys. Strummer was a good guy. When Billy Bragg wanted to do something to commemorate Joe’s life, after he died, a guy called him from a prison in England and said that he wanted to use music as rehabilitation but they didn’t have any guitars. He asked Billy to get him some guitars and Billy did. The more he thought about it, the more he thought this was a good idea. He named it after The Clash’s song, “Jail Guitar Doors.” Years later, I had Billy Bragg come with me and Tom Morello, Gilby Clarke, Perry Farrell, Jerry Cantrell and Handsome Dick Manitoba to play a show at Sing Sing Prison in New York. Billy had Jail Guitar Doors written on his guitar and I said, “That’s interesting.” He said, “It’s an old Clash song. Do you know it?” I said, “Yes, of course I know it. It’s about me. ‘Let me tell you about Wayne and his sweet deals of cocaine…’” We started talking about it and I decided that this would be a good thing for me to take on in America, so my wife, Margaret, Billy and I formed Jail Guitar Doors U.S.A. to be the partner organization to Jail Guitar Doors U.K.

That’s crazy all of the names you named too. Does Dick Manitoba have stuff to do with it too?
They’re just my friends. They’re guys that I arm-wrestled into going into prisons with me. Musicians always have identified with people in the margins and people outside the mainstream, so my experience has been that most musicians are really happy for the opportunity to do something for those people that are the most un-liked in the social structure.

I don’t ever want to learn the codes of conduct or anything about prison. It just seems pretty lame.
Nobody comes out better from it.

There’s no way. I’m really just blown away that I’m actually talking to you, as stupid as that sounds. You definitely had a huge impact on skateboarding. I don’t know if you knew it or not. In the late ‘80s, there was a group of us skateboarders that were big Wayne Kramer fans. My friend Art Godoy painted Rob Tyner and you on my helmet and we went to Australia. I skated to “Ramblin’ Rose” in ‘87 and it was a big deal. It was our idea of what you guys stood for in the ‘60s. Basically, you guys created everything cool and had the most positive impact on me and my friends and the people that I came in contact with. We made t-shirts. We made stickers at Kinko’s. It was crazy. I have a couple quick questions. My friend Art told me that you guys had a spiritual adviser and he would come out and talk before your shows and stuff?
Right. He’s like our Master of Ceremonies. He would come out and get the crowd pumped up.

That’s so great. Did you get along with everybody in the band, MC5?
We were friends up until the point when the band imploded. We worked so hard. We all grew up in the neighborhood and we were boyhood friends and we went through so much together. By the time the band broke up, there were so many bad feelings that everyone went their separate ways for a long time. The real enduring sadness in my life is that I was never able to really re-connect with Rob and Fred as a grown-up. I didn’t know them later in life. That’s the way life goes sometimes. It tells me to always be straight with people. If you love somebody, tell them you love them because the next time they might be gone.