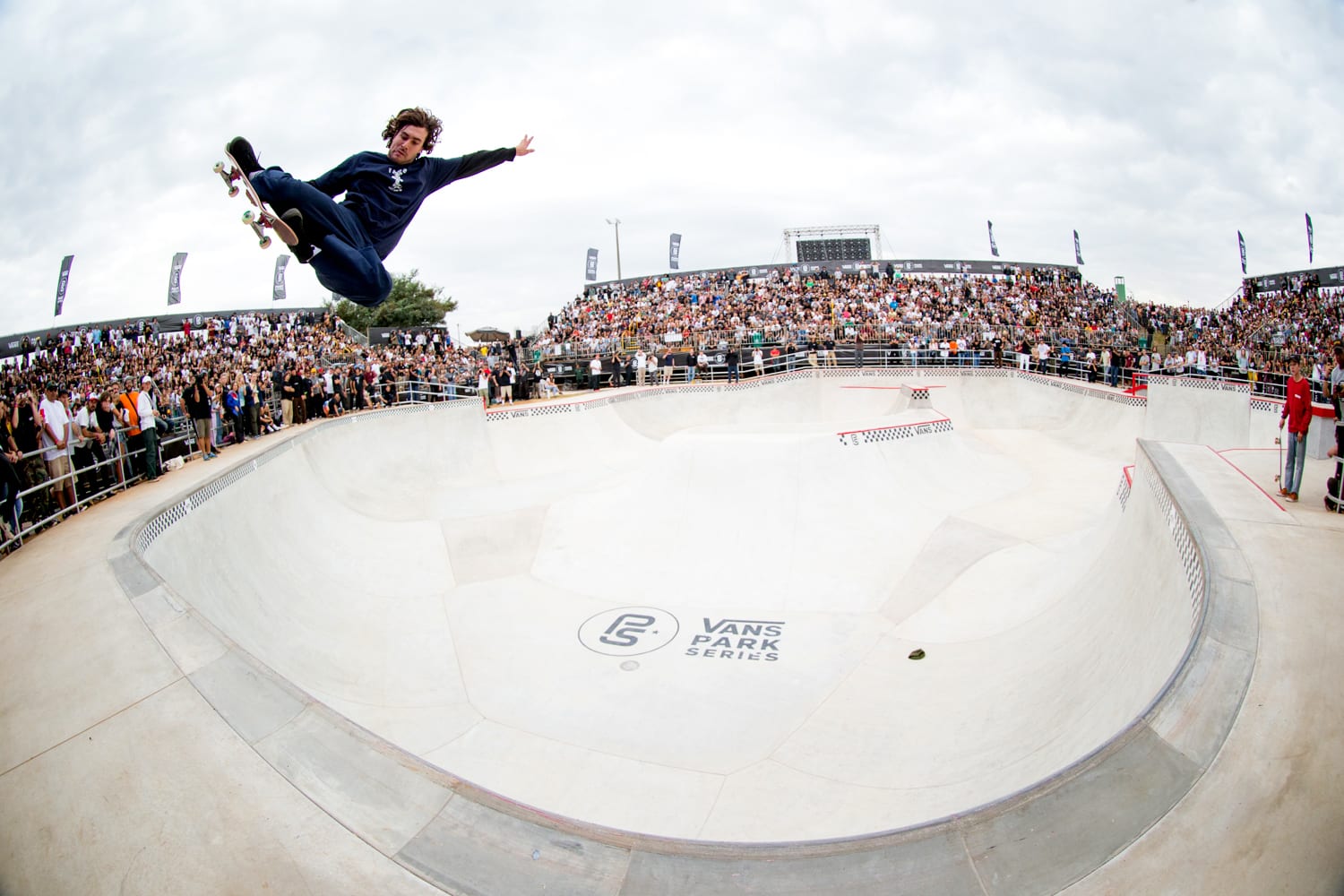 Vans has been supporting skateboarders since 1966, resulting in more than five decades of proven dedication to skateboarding. In the late ’90s, when there were very few concrete skateparks in existence, Vans put its money into building them, resulting in some of the best concrete skateboard parks ever created, including the historic Vans combi bowl replica.

Thankfully, the combi bowl at Vans Park in Orange, California, became a reality in 1998 due to Vans and Steve Van Doren’s patronage and the influence of Dave Duncan and others’ concrete dreams. The combi pool replica was built by Rick Carje of R.C.M.C. who was also involved with SoCal’s first private made-to-skate backyard pools, including Kelly Bellmar’s, Chicken’s and the Basic Bowl. The Vans combi bowl design was based respectfully on the original legendary combi pool at Pipeline Skatepark, which was founded by the Hoffman family in Upland, California in 1977.

As outdoor public concrete skatepark building has exploded around the globe, Vans’ dedication to providing additional transition-friendly terrain stayed on course. In 2019, Vans poured more of its support into yet another rendition of the combi bowl (reversed) and a new park terrain flow area at its public skatepark in Huntington Beach, California.

Now, as Olympic skateboarding fever begins to spread, Juice Magazine felt it was important to repeat these facts as a reminder of skateboarding’s history and the legacy of skatepark building and to give credit to Vans for its staunch support of skateboarding and skateboard parks.

Vans has always stayed true to its commitment to skateboarders and continues to finance and build innovative skateboard parks around the globe as well as hosting the Vans Park Series, which is arguably the best bowl skating competition in the world.

As Vans continues its honorable quest to present world class skateboarding events, they continue to build quality skateparks around the planet. The Vans Skatepark in Brazil, which will host the upcoming VPS competition in Sao Paulo, is the second official VPS-certified park terrain facility in the world, built by Vans in 2018.

Located in the Parque Cândido Portinari, the Vans Skatepark São Paulo was built in just five months and was the first in South America and the second in the world built-to-spec and certified by the VPS for the park terrain.

Stay tuned as the VPS returns to Brazil and catch all the action on the live stream, on Sunday, June 23rd, on vansparkseries.com.

Take a look at the stellar skateboarding scene in Brazil in this episode of Jeff Grosso’s Loveletters to Skateboarding presented by Vans….

Brazil has one of the best, oldest and coolest skate scenes in the world. Grosso and the Love Letters crew headed down to see how much of epic skate history they could uncover in 8 days. This is the longest episode ever and we barely scratched the surface of Brazilian skateboarding!

Costa Mesa, CALIF. (June 12, 2019) – Vans Park Series returns to São Paulo, Brazil on June 22-23 to bring the world’s best professional park terrain skateboarders back for yet another adrenaline-charged battle of competition at the second stop of the 2019 Pro Tour.

Hosted at the Vans Skatepark in Brazil, the second official VPS-certified park terrain facility in the world built by Vans in 2018, the year’s event is slated for another packed house of passionate skateboarding fans. In the lineup, Brazilian natives Yndiara Asp and Pedro Barros are guaranteed to up the ante of competition in their home country.

Yndiara is proof of the groundswell of international competition from women across the world at VPS events. After taking second last year at the VPS São Paulo stop, Yndiara reached the podium at two other VPS events, most recently taking 3rd place last month in China to spark off the 2019 season. Pedro is known as one of the most powerful skaters in the Park Series, will make his first appearance of the 2019 season, as he hopes to win a third consecutive VPS Brazil title.

The battle for tour challengers to earn a spot in the World Championships also ramps up as they seize the opportunity to better their rankings, while keeping close tabs on leaders like 17-year-old Roman Pabich (USA) and 17-year-old Sakura Yosozumi (JPN), recent winners of the VPS 2019 Shanghai stop. Filled with exciting talent from both new faces and tour favorites, the first stop of the 2019 Vans Park Series Pro Tour certainly did not disappoint. See latest event highlights here.

Located in the heart of São Paulo, the biggest city in Brazil, Vans will return for the second time to its new park, a public, free access, built-to-spec skatepark with over 2,800 square feet of park terrain, featuring a 9 1/2-foot-deep end, multiple transfers, extensions, a center volcano, ledges, rails, and smooth concrete coping all around.

The 2019 Vans Park Series Pro Tour will be streamed live on vansparkseries.com in English and can also be viewed locally on television in Brazil via Globo.

The 2019 Vans Park Series Pro Tour is the premier competitive platform for professional park terrain skateboarding. Spanning five countries over a five-month season, the series features four global qualifiers for men and women, and culminates with the official Vans Park Series World Championships to be held in Salt Lake City, Utah in September. Showcasing an international roster of skateboarding’s elite pros, Vans Park Series awards a total series purse of $800,000 (USD) and advocates its principal commitment to prize parity for men and women.