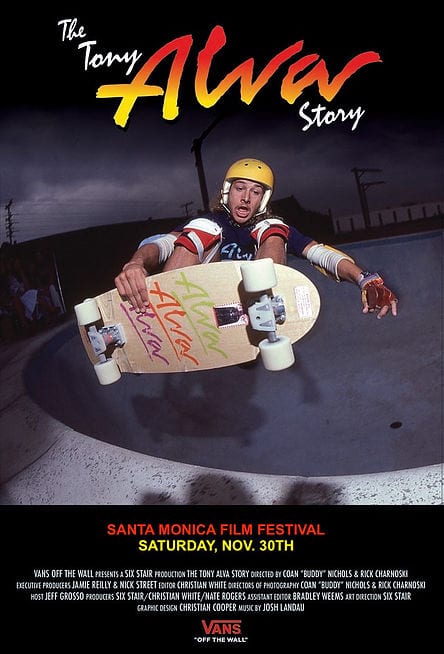 On Saturday, November 30th, 2019, at 3:30pm, VANS and Juice Magazine will host a screening of The Tony Alva Story, with Tony Alva and Ray Flores, at the AMC Broadway 4, 1441 3rd Street Promenade, in Santa Monica, California,​ as part of the legendary Santa Monica International Film Festival.

Get more your tickets now at https://www.smff.org/thetonyalvastory

Considered by many to be the godfather of modern day skateboarding, Tony Alva’s brand of aggression and bravado in the 70’s set the stage for the way skateboarding would be forever defined.

Vans’ The Tony Alva Story chronicles T.A.’s humble beginnings on the streets of Santa Monica to his rise to superstardom as part of the legendary Z-Boys, his drug-induced implosion and his ultimate rise from the ashes…

Vans is beginning to roll out the Tony Alva documentary in film festivals and theaters around the globe. The site has all the confirmed dates and locations with more screenings being added constantly. Keep checking back for updates to find a screening near you at https://www.vans.com/tonyalvastory

To learn more about Tony Alva, read on…

Santa Monica International Film Festival (SMFF) is produced by the non-profit Malibu Film Foundation (established in 1997). The Festival is organized by professional filmmakers that actively make films, television and other entertainment based content

PrevPreviousListen to Ozzy: “Under The Graveyard”
NextFriday Flashback: Rumble in Ramona 2019Next