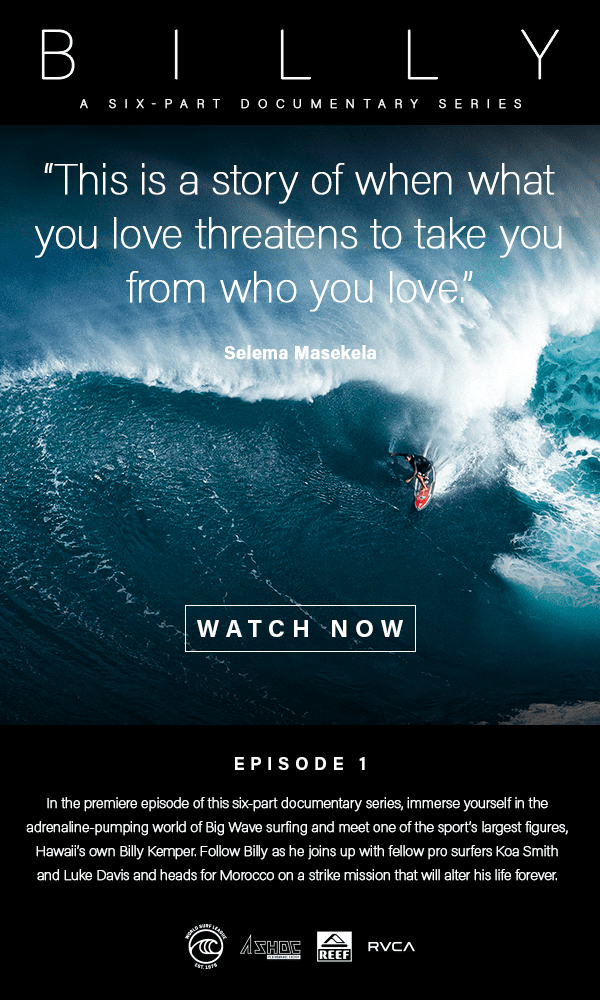 This is Strength. This is Redemption. This is “Billy.”

Narrated by Selema Masekela, ‘BILLY’ brings a unique perspective to the accomplishments of the four-time Jaws event winner, 2018 Big Wave World Champion and father of four from Maui now living on Oahu.

Pushing limits of what is humanly possible every time he paddles out, Kemper’s focus is the pursuit of riding the biggest waves in the world and achieving the lofty goals he set for himself.

“This is a story of when what you love threatens to take you from who you love,” Masekela explains.

Coming off of a monumental year in 2019, Kemper found himself at the high point of his already distinguished career after winning the cbdMD Jaws Big Wave Championships — his fourth win at the venue — bagging the wave of his life at Jaws, then following it up with a victory at the Sunset Open.

But that wasn’t enough for Kemper, and he wanted to keep this incredible momentum rolling.

Keeping an eye on the swell charts, when things started popping in the Atlantic he called up fellow competitors and freesurfers Koa Smith and Luke Davis to see if they’d join him on a swell hunting expedition.

With the surf smashing into the North African coastline in February of 2020, the boys packed their bags and headed to Morocco.

“As far as the consequences, I don’t think we really knew what could happen until this trip,” Kemper explains.

Episode 1 features Smith, Davis and Mark Healey, along with their local guide Jerome Sahyoun, as the crew surfs an empty perfect barreling right, a step-filled slab and an inviting left as soon as they touch down in Morocco.

While the waves from the first swell were a nice introduction, a second, much larger swell started to form while they were still in Morocco, and the crew decided to stay for it to see what it offered …

While you’re visiting WSL, watch episode 2… and stay tuned for the next four episodes coming soon.