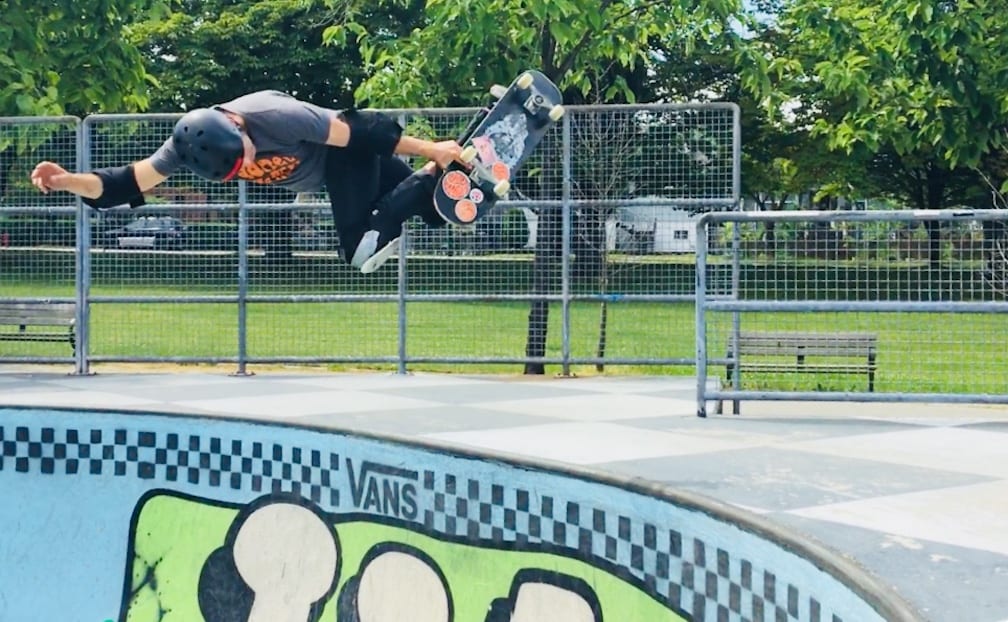 I heard the familiar “clack” sound as I locked my board into place on the coping with my back foot. I stared at the massive curved wall that stretched out in front of me and felt a bead of sweat run down the bridge of my nose. My heart was pounding like a jackhammer. At 58 feet wide and 13.5 feet high with two feet of pure vert, this was a big ramp – no, this was a gigantic ramp – certainly the largest structure I’ve ever skated. It was terrifying. I pushed down on the nose of the board with my front foot, pumped down the transition, across the flat-bottom and up the opposite wall aiming at a region of empty space roughly five feet above the coping. Once I shot off the coping, I snatched the nose of my board, unweighted, and initiated the 180-degree rotation that would bring me back down into the bowels of the ramp. I spotted my landing and the following thought entered my mind: “Cool. No problem. I’ve got this one.” At the very last second, however – that moment when I was supposed to let the wheels regain contact with the ramp and smoothly roll away – I did exactly what I did not intend to do; I tossed my board to the side and knee-slid down the transition, slowly grinding to a halt in the flat bottom. I unclicked my helmet and tossed it across the width of the ramp.

Vertical skateboarding, or just “vert”, for short, is hard. Sometimes brutally so. It also takes guts, patience and skill. And it’s all so much harder when you’re a half century old, the age at which most skaters have long since abandoned any thoughts of blasting a head-high backside air. But here I was; a fifty year-old, exhausted and drenched in sweat, trying to land what used to be a routine trick for me during my early days as an aspiring professional skateboarder. I didn’t feel merely angry or frustrated. I felt something worse, something far more sinister and depressing; I felt like a washed-up old fart.

How did I get to this point? What sort of underlying madness propelled me to push myself so hard at what appears to be a to be a purely self-indulgent and possibly destructive physical activity, one that was clearly not, at this particular moment, bringing me much pleasure or enjoyment. Was this a way of addressing a midlife crisis, proving to myself that I was up to the challenge, that I still “had it”?

For the non-skater, this is presumably what most people think of when they see me. When a non-skating outsider sees a middle-aged man struggling to land a proper backside air, they see someone who they might think is perhaps a little bit deluded, someone who is refusing to face the sad truth that vert skating – skateboarding in general, in fact – is a young person’s game, a game that someone my age has no business participating in.

I think these folks are wrong.

I teach philosophy at the university-level. I teach not because I necessarily love to teach, but because teaching serves a purpose. In particular, teaching philosophy provides me with a steady pay-cheque, one that enables me to support my family, pay the mortgage, and buy food and clothes, among other things. Teaching philosophy, then, is something I do largely as a means to achieving something else. Although there are aspects of teaching that I really like, teaching is at rock bottom a goal-driven activity, one whose value doesn’t necessarily lie in the activity of teaching itself but rather points to something external to the activity of teaching.

OK, nifty distinction. But how does all of this fit into my life as a middle-aged skater?

When I first began skating 35 years ago, skateboarding was considered uncool – a fringe activity for losers and outcasts. I didn’t care. Skateboarding was the only thing that mattered. Nothing came close to the open-throttle stoke produced by bombing down a hill or executing a smooth frontside kickturn. For me, a skateboard wasn’t a toy or a form of transportation. Rather, a skateboard was something different. A skateboard was something that possessed weird and wonderful powers, a kind of secretive mystical magic, whose properties could be appreciated only by those who were prepared to give themselves over completely to a life of skating. The underlying feeling I had during these early years was a sense of discovery, that I had unearthed something rare and precious, something that needed to be protected and cared for. There was also the overpowering sense that the non-skater was missing out on something important. How could someone not be a skater? What could possibly be more amazing than skating? What on God’s green earth are these non-skaters thinking?

My life during these early days wasn’t a casual incursion into the skater-lifestyle or a temporary distraction. Rather, skating was primal. Skating was a reaching–down into a deeper more fundamental level of existence. Skating made me feel as if I had stumbled upon an entirely new way of understanding myself against which my previous non-skater self stood in bleak contrast. Skating, in effect, revealed my true essence. This is what I am: a skater. This is what I’m supposed to do: skate. Nothing else matters. Everything else is just white noise. My devotion to skating during these early days was complete. My obsession was maxed-out. I was all-in.

And so this is how it was: I was a perpetually wild-eyed teenager, raging and frothing, fully tripping out on skating and caught up in its beautiful frenzied madness. During these early days, I skated just to skate.

But then something happened. By the time I reached twenty, my skating reached a level that attracted quite a bit of attention, especially from those in the skate industry. This led to a number of high-profile sponsorships, a string of contest victories, traveling, demos, photo shoots, and appearances in commercials. I was making pretty good money and a career in professional skateboarding was just around the corner. All of this happened in rapid-fire succession – within the span of a year – and came with enormous pressure and high expectations from all sides. I didn’t like it. In fact, I hated it. My young mind, unable to adjust to the tension and constant demand to perform and impress, turned into a pressure cooker. I felt hemmed in on all sides. For the first time, skating began to feel dark and hollow. My relation to skating, an activity that had up to this point been an eternal wellspring of joy and creativity, had become depressing, toxic even.

One day, after finishing a solo-session at a local vert ramp, something dawned on me: I was no longer skating just to skate. Rather, my skating was constantly aimed at something external to the act of skating, at another contest win, a photo in a magazine, or whatever. I realized that skating had ostensibly become a job. It was work. This version of skating – this hyper-competitive, goal-directed version – was so completely different than the version that first drew me in that it left a gnawing unease in my stomach, a sense that I had somehow forgotten what skating was all about. Right then and there, in a moment perfect clarity, and to the total shock of my peers, I quit. Let me be perfectly clear: my quitting didn’t simply involve removing the work-related aspects of skating – the sponsorships, the demos, the contests. My quitting was total. I just quit, full stop, and barely stepped on a skateboard for two decades.

And now, many years later as a middle-aged man, I’ve found my way back to skating. My return to skating came about in a totally unremarkable manner. There was no epiphany moment, no flash of insight, no moment where I realized that there was a gaping hole in my life that needed to be filled with skating. Rather, one day, completely out of the blue, my wife asked me why I didn’t skate. Since I was, at this point in my life, a dedicated surfer, the fact that I hadn’t skated for two decades just didn’t occur to me; I was mentally and physically that far removed from the world of skating. My wife’s simple question made me realize that I didn’t have any good reasons for not skating, so the next day I bought a brand new board, pads and helmet. And I’ve been skating ever since.

So why do I skate now? Why do I, at this relatively advanced age – the age at which one’s bones become increasingly inelastic, where one’s reflexes begin to slow, and stiffness begins to pervade the body – choose to engage in an especially punishing and high-risk form of physical activity?

So why, then, do I skate? The answer is simple: I skate just to skate.

I skate because skating sometimes leads to rare and beautiful moments, where the duties and distractions that consume so much of daily life become muted. Sometimes – perhaps during a particularly gruelling session, when I am flat-out exhausted and at the extreme edge of my physical capacities, when my legs are burning and heavy and my brain is screaming at me to stop – I find myself pushing through the heaviness and each trick somehow becomes seamlessly and effortlessly connected to the previous one. There is no straining. There is no struggling. The difficult becomes easy. Backside air, madonna, eggplant, bodyjar. It all just comes to me.

During these moments there is a subtle rift in my ordinary way of experiencing the world, where the sense of self becomes suspended and the awareness of time disappears. These moments are accompanied by an underlying sense of calm, unity and an energized focus – a merging of intentional action and conscious awareness. There are no emotions. Feelings and thoughts cease. Here I am, at least temporarily, reunited with a younger version of myself, that raging and frothing self whose primary mode of being was to skate, and I am skating for no other reason than to skate.

Colin Ruloff is a skater/surfer/philosophy professor from Vancouver, BC, Canada. He spent the late 80’s and early 90’s slashing and grinding his way around the Pacific Northwest, boosting big backside airs for Powell and Tracker, and scoring uncrowded waves in Tofino. In the mid 90’s, and on the cusp of turning pro, he traded skating for school and began the long haul of obtaining his Ph.D. in Philosophy. Colin now teaches in the Philosophy Department at Kwantlen Polytechnic University. When not in the classroom, you’ll find him skating at Hastings Skatepark, hustling for waves in the now-crowded lineups in Tofino, and running a small surf/skate outfit called Doppelganger Industries (@doppelgangerindustries) with his skater/surfer/philosophy professor friend and colleague, Patrick Findler. Colin and Patrick are also organizers of The PHILOsurfer Convergence, an annual philosophy conference for professional philosophers that surf. Colin can be reached at colin.ruloff@kpu.ca

Check out Colin’s side project at https://www.instagram.com/doppelgangerindustries