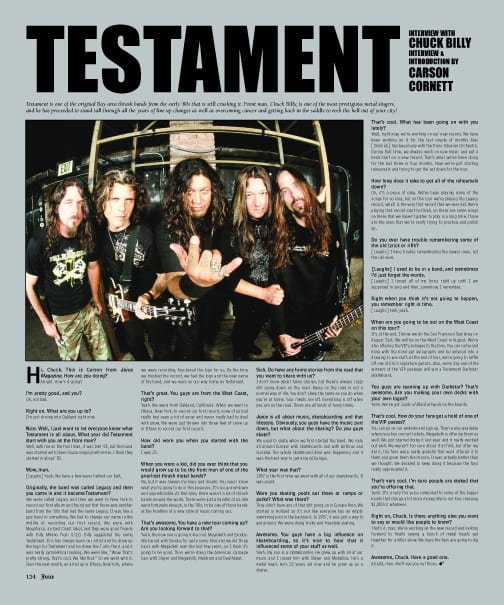 Testament is one of the original Bay area thrash bands from the early ‘80s that is still crushing it. Front man, Chuck Billy, is one of the most prestigious metal singers, and he has proceeded to stand tall through all the years of line up changes as well as overcoming cancer and getting back in the saddle to rock the hell out of your city!

“It was always my hope and dream. You never know what you’re going to do in this business. It’s so up-and-down and unpredictable. At that time, there wasn’t a lot of thrash bands around the world. There were just a handful of us. We were fortunate enough, in the ‘80s, to be one of those bands at the frontline of a new style of music coming out.”

Hi, Chuck. This is Carson from Juice Magazine. How are you doing?
Alright. How’s it going?

Right on. What are you up to?
I’m just driving into Oakland right now.

Nice. Well, I just want to let everyone know what Testament is all about. What year did Testament start with you as the front man?
Well, with me as the front man, it was late ‘85, but the band was started with Steve Souza singing before me. I think they started in about ‘83.

Wow, man.
[Laughs] Yeah. We have a few years behind our belt.

Originally, the band was called Legacy and then you came in and it became Testament?
We were called Legacy and then we went to New York to record our first album and found out that there was another band from the ‘60s that had the name Legacy. It was like a jazz band or something. We had to change our name in the middle of recording our first record. We were with Megaforce, an East Coast label, and they were good friends with Billy Milano from S.O.D. Billy suggested the name Testament. Eric has always been our artist and he drew up the logo for Testament and he drew the T into the A and it was really symmetrical looking. We were like, “Wow. That’s pretty strong. That’s cool. We like that.” So we went with it. Over the next month, an artist up in Ithaca, New York, where we were recording, fine-tuned the logo for us. By the time we finished the record, we had the logo and the new name of the band, and we were on our way home as Testament.

How old were you when you started with the band?
I was 23.

When you were a kid, did you ever think that you would grow up to be the front man of one of the gnarliest thrash metal bands?
No, but it was always my hope and dream. You never know what you’re going to do in this business. It’s so up-and-down and unpredictable. At that time, there wasn’t a lot of thrash bands around the world. There were just a handful of us. We were fortunate enough, in the ‘80s, to be one of those bands at the frontline of a new style of music coming out.

That’s awesome. You have a new tour coming up? Are you looking forward to that?
Yeah, the new one is going to be cool. Megadeth and Exodus. We toured with Exodus for quite some time and we did three tours with Megadeth over the last few years, so I think it’s going to be good. Then we’re doing the American Carnage tour with Slayer and Megadeth, Meldrum and Deathbeat.

Sick. Do have any funny stories from the road that you want to share with us?
I don’t know about funny stories, but there’s always crazy shit going down on the road. Being on the road is not a normal way of life. You don’t sleep the same as you do when you’re at home. Your meals are off. Everything is off when you are on the road. There are all kinds of funny times.

Juice is all about music, skateboarding and that lifestyle. Obviously, you guys have the music part down, but what about the skating? Do you guys skate?
We used to skate when we first started the band. We rode all around Europe with skateboards and with Anthrax and Suicidal. The whole skateboard deal was happening and it was the best way to get around Europe.

What year was that?
1987 is the first time we went with all of our skateboards. It was great.