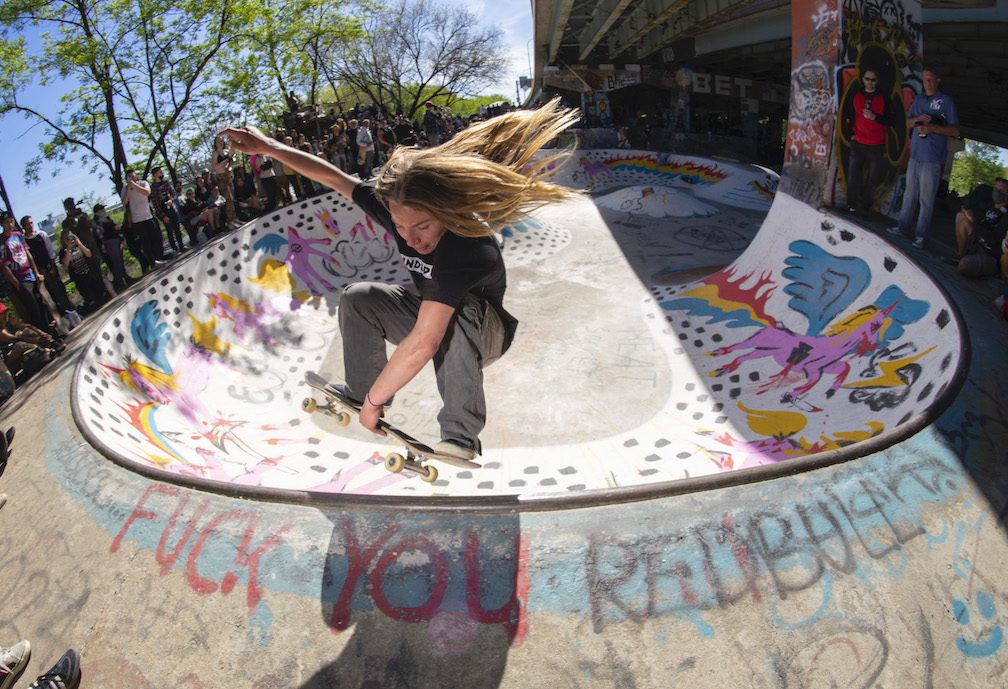 The first-ever all-girls skate contest at one of the most gnarly DIY spots, FDR skatepark, went down on May 1st, 2021, in Philadelphia. I was lucky enough to witness firsthand such a rad moment in history.

The local chicks of FDR, Lauren McFadden (Gnar Laur), Nicole (Ryps) Rypins, Alyssa Young, and Gloria (Shredher) Hagg, put the event together after realizing it was about time the ladies got a contest for themselves.

When I heard my mom, Shannon Smith, got the invitation to judge at the contest at FDR, I had to tag along. My mom was judging alongside three other ladies: Jean Russin (Arizona), Stephanie Murdock (Maryland), and a PA local shredder, Andrea Bethke.

Over the next two days, we took the drive from South Carolina to Philadelphia. Upon arriving, we went by the park to meet up with the local crew on Friday night. Everyone was hard at work finalizing everything for the event. Even in the dark, the local FDR chicks worked hard completing the Gnar Bar and other finishing touches.

The painting Shredher and the girls did on the bowl with magical pink ponies with devil horns and rainbows out of their asses helped give a touch of raw femininity to the park.

Showing up at FDR the night before couldn’t remotely prepare me for the amount of rad art, killer music, and shredding that was about to go down the next day.

After grabbing a steak Saturday morning, we pulled up around noon to an already packed park. People were standing at the gates at the front of the skatepark directing cars to park around the thirty-plus art vendors already set up. Gloria and Ryps help put together a great team of sponsors and local artists to make this contest happen.

Gnar Laur (@lalalandartwork) not only handled the Gnar Bar for all refreshment needs, but she also lined up nine bands and set up the sound for the whole event. The music began with 13-year-old Hannah on the Cello, and with each set that followed, the hype continued to grow.

The lineup of bands was diverse and definitely punk, including Sweetpill, Froggy, Witch Slap, Ugli, New Fame, Stolen Wheelchairs, Alpha Sub, and Prostitution. Thanks to these talented musicians, the overall energy at FDR was outstanding, and the skating just got tougher.

To help add to the energy, the hilarious Bud Baum and Joey P. took the role of announcers for the whole event.

The event was already huge and was continuing to grow all day. By the time the contest was in motion, 37 skateboarders of all ages had signed up. The judges even had to delay the contest start due to adding so many new names to the rosters, but the more, the merrier. The contest was huge and the vibes produced were immaculate.

The FDR all-girls skate contest that went down was anything but your typical contest. The decks were full of raging metalheads, drunk people falling into the park, ladies slamming into each other at full speed, multiple people entering at the last minute, skaters skating in wrong heats and smoke bombs going off in the middle of runs.

For moments when I was watching, it didn’t seem like a contest but simply a big session of diverse female and queer skaters giving it their all and pushing each other’s limits. As I watched the heats progress, my inspiration to learn more tricks grew and I began having to resist the urge to jump in. The whole thing was a beautiful, chaotic representation of what makes the East Coast underground skate scene so remarkable.

The local skate scene in Philadelphia is one to be recognized, especially the ladies. FDR local, Caroline Duerr, did Philly justice by taking home 1st place and $600 cash.

Caroline is the epitome of FDR as a skater; she never fails to commit to a trick no matter how gnarly and does it all with a smile on her face.

In second place was Leon, a queer shredder from Wisconsin who tore up FDR like their own local park, showing speed and style throughout the park. Both Caroline and Leon were awarded one-of-a-kind trophies by the talented artist Adam Wallacavage.

Another local who did Philly justice is Celina Meehan. She got third place and executed one of my favorite tricks of the day, a blunt to fakie in the square bowl.

In fourth place was Sarah Thompson, who lives out in California and absolutely dominated the FDR park once she showed up on the East Coast.

Another ripper from the West Coast took fifth place, 14-year-old Nina Augular from Washington. This girl does some serious frontside ollies!

Finally, placing sixth and skating hard was Pennsylvania skater, Leah Hoptak, who laid down some steezy front rocks at the contest.

Local Philly girls such as Ryps and Alyssa Young, who helped make this event go down, also killed it in the contest, which is no surprise. And many more talented women/queer skaters competed, making the judges seriously have their work cut out for them.

It may have been the first all-girls competition at FDR, but it will not be the last. The amazing women that put this contest together have already begun to think of ideas to improve the next. I personally don’t know how much better it could get, only bigger!

There is genuinely so much to be said about the Philly skate scene and the underground skate culture that thrives at FDR. I could talk forever about the culture that has been preserved here over the decades and how skateboarding thrives from the art, music and family that surrounds it. I left the competition with a new ticking time bomb in me that made me want to skate harder and be more creative in my everyday life.

Skating the next day, I found myself inspired to fully commit to tricks I never have before. I am almost positive there is something in the FDR air that pumps up your soul and makes you skate harder.

Not only is skating in Philly out of this world, so are the people you meet. For the weekend of the contest, Adam Wallacavage was generous enough to let my family stay in his insanely artistic home, as well as two other judges and as many skate rats that could fit on the floor.

To say the least, the FDR scene is more than a group of skateboarders; it is a hardworking family who supports each other in the name of skateboarding. I can’t wait to attend future female events at the FDR skatepark. Philly never fails to leave me stoked!

If FDR means something to you as it does to me, please click the GoFundMe link to donate to help repair the FDR vert ramp! The ramp was over 25 years old when some kook decided to set it on fire over this past weekend. Many of the best skateboarders around the world have skated this vert ramp and it is a shame to see it burn. The circumstances definitely suck, but the FDR skate crew is resilient as hell and the next ramp will only be better!

Here are some words from FDR legend/overlord, Carlos Biaza, regarding the ramp… “Sad day for everybody who loved that ramp. I personally learned a lot of shit and skated with a bunch of great people on that ramp. This sucks, but it’s not gonna stop us from skating vert. We must rebuild. At this point any kind of monetary help would be greatly appreciated. I personally want to see a metal framed ramp because skating vert on a metal ramp feels so fucking good and will be fire proof. Thanks to everyone who loves it and fuck the haters.”