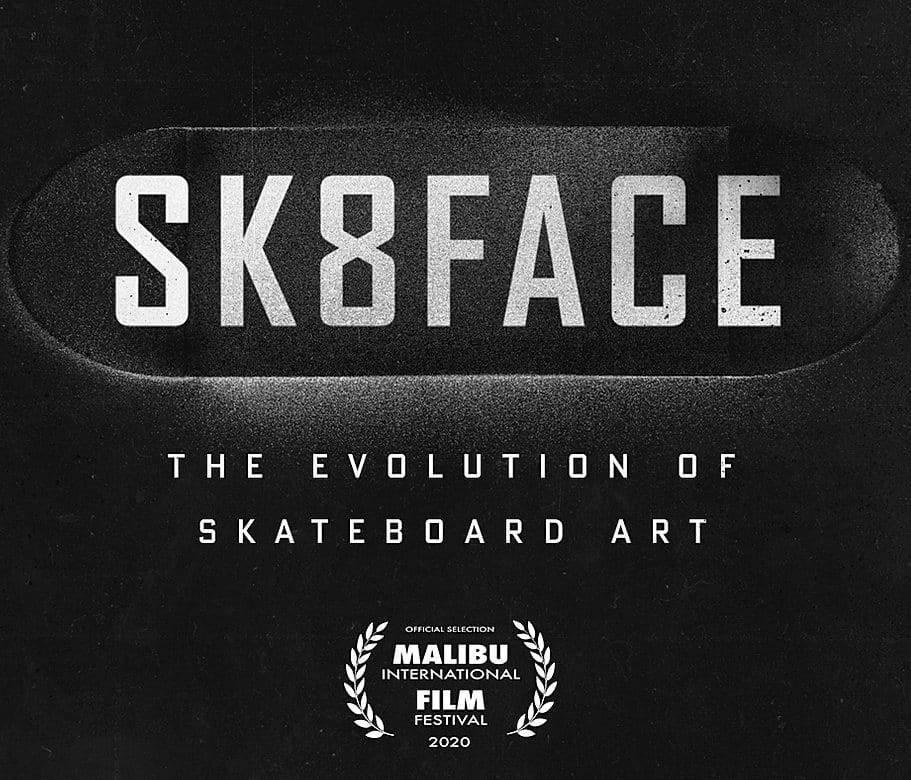 Matt Bass’s feature documentary “SK8FACE”, about the history and evolution of skateboard art and culture, will hold its world premiere at Malibu Film Festival sponsored by Juice Magazine. The premiere is set for Saturday, Feb. 15 @ 2:30PM at the Malibu Civic Theater, located at 23825 Stuart Ranch Rd, in Malibu, CA.

After a decade of filming SK8FACE is FINALLY DONE, featuring interviews with over 60 legendary skateboard artists…

Malibu Film Festival is an exclusive 1-day film festival widely considered a premier showcase for independent films and the launchpad for many now-prominent independent filmmakers.

SK8FACE The History and Evolution of Skateboard Art and Culture.

SK8FACE is designed to inspire the rebellious spirt of creativity and show the importance of skateboard art and its global impact on art history and pop culture. With skateboarding now officially accepted into the 2020 Olympics, this film is in perfect sync to celebrate skateboarding’s evolution.

The 2020 Malibu Film Festival opens with the festival premiere of “Johnny Strange: Born to Fly” a feature documentary from Malibu local award-winning filmmakers John Watkins and Eamon Harrington, telling the story of 23 year old adventurer Johnny Strange, who at 17 was the youngest person to climb the tallest mountain in all 7 continents before becoming one of the world’s elite BASE jumpers.

Benjamin Pollack’s short documentary “Out of Malibu” and Rebecca Carpenter’s short documentary “The Game Was On” will screen at Malibu Festival sharing a few Malibu locals experiences fighting the Woolsey Fire and in some cases losing everything only to find they have much more to loose. This screening is free to attend while tickets are available at www.malibufilmfestival.eventbrite.com

Matt Bass’s feature documentary “SK8FACE” about the history and evolution of skateboard art and culture will hold its world premiere at Malibu Film Festival sponsored by Juice Magazine.

Matthew Mendenhall’s feature documentary “Greetings From Unicorn California” will hold its world premiere at Malibu Film Festival, providing a unique behind-the-scenes journey of The Chris Robinson Brotherhood. Affectionately known as the CRB, Chris Robinson (legendary front man and founding member of the hugely successful rock band The Black Crowes), has cultivated a group of immensely talented musicians focused on bringing their independent Farm-to-Table, psychedelic project to the masses. Through the lens of their longtime friend, discover the vulnerable moments sketching out original material and the diverse individuality of each musician as they take their California Space Boogie across the country in this 6+ year trip of Vibration, Love and Light.

The Los Angeles premiere of Steven Latham’s feature documentary “The Mustangs: America’s Wild Horses” will close the Malibu Film Festival, taking audiences on an odyssey throughout America to places few people have seen or even know about. There are more than 80,000 wild horses on our federal lands and more than 50,000 in holding facilities. Pulitzer Prize-winning journalist David Philipps says, “The wild horse is so ingrained in the American imagination that even for those who have never seen one know what it stands for: fierce independence, unbridled freedom, the bedrock ideals of the nation. From car ads to high school mascots, the wild horse – popularly known as the mustang – is the enduring icon of America. But in modern times it has become entangled in controversy and bureaucracy, and now its future is in question.” Whether you are a horse person or not, this film will make you fall in love with America all over again.

*A portion of the ticket sales proceeds benefit the construction of the Johnny Strange Memorial skate park in Malibu, CA.