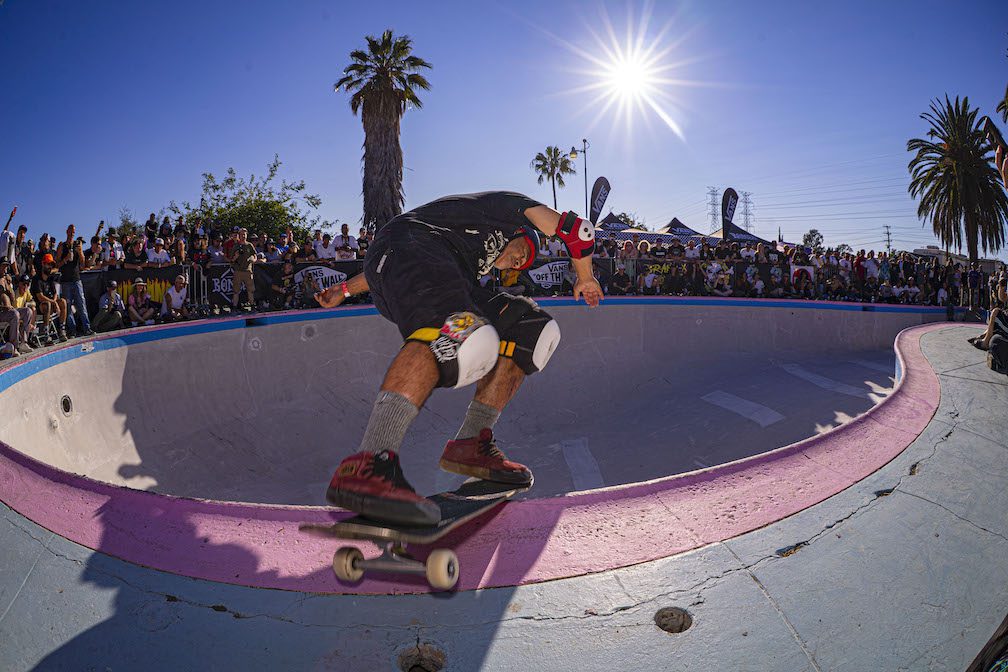 Shred Fest Keeping It Punk at the Pink Motel

Sitting alongside historic U.S Route 99, in La Tuna Canyon, California, there exists an infamous motel known for many magical moments from the Powell Peralta film “The Search For Animal Chin”, and the “Sk8 TV” show (Skatemaster Tate R.I.P.) and a longer IMDB list than most actors could dream… and on September 18th, the 2021 Shred Fest USA became another chapter in the Pink’s legacy.

The Pink Motel, built in 1946 by Maximillian and Gladys Thomulka, has become sacred ground and one of skateboarding’s most celebrated coliseums. The family legacy at the Pink Motel is strong as Monty Thomulka took over running the joint for his parents until 2015 and even making a cameo appearance in “The Search For Animal Chin.” Now Monty’s daughter, Tonya Thomulka and her son Alex continue to run the family business, which has become a legendary filming location, featuring Cadillac Jacks Cafe, and a junkyard in the back filled with classic cars as well as the legendary fish bowl pool.

Rolling up to the place gives you chills every time, even more so when you know a heated session with some of skateboarding’s most prolific coping assassins is getting ready to go down with everyone putting in work to cement a place in the history books with every run.

The soundtrack was live and brought a whole new level of energy to the session complete with circle pits and punk anthems provided by So-Cal punk rock icons Pulley and Strung Out. Steve Caballero’s new band, Urethane, was also a crowd favorite and had the mosh pit going, preceded by a lively set from Are You A Cop? (whose new record is called “Good Times”), and some classic punk rock reggae from Tomorrows Bad Seeds, with skaters/surfers/rockers Strange Case (whose latest record is called “Quarter Life Crisis”) kicking the day off.

Andy Roy played announcer and overall hype man handing out cash for tricks and urging everyone to spill blood, while Tommy Sandoval curated the vinyl spins as resident DJ for the day.

The Pink Motel pool was surrounded by photographers and filmers from all over including Michael Chantry, Olga Aguilar, Dave Weems, Dan Levy, Alex Crawford, Taylor Ballard, V Reinert, Lorrie Palmos-Malley and even Chuck Katz dropped in to see Pulley play.

Allen Losi also made the scene while a portion of the raffle tickets sold at Shred Fest were donated to raise funds to help out with Al’s medical bills and get him back on board. Prizes for the raffle were generously donated by Baker Boys, New Balance, NHS, Powell Peralta, Vans, Juice and many more.

Another highlight of the day was seeing Shaun Ross, everyone’s favorite skater, spreading aloha and doing great after getting hit by a car in April. Boss Ross is one of the nicest guys and he’s tough as nails! Fuck yeah Shaun!

Thanks to Dave Weems, Olga Aguilar and Joaquin Sahagun, Powell Peralta, Alex Crawford for sharing their photos, and thanks to Dan Levy of Juice Magazine for the running the live stream on the Juice Magazine Instagram all day, while Coty and Kaycee held it down at the Juice booth. See ya next year at the Pink!

PrevPreviousCheap Suits and Chainsaw Guitars: The Monsters Walk Among Us
NextTampa Pro Live Webcast Oct 16-17 at Skatepark of TampaNext