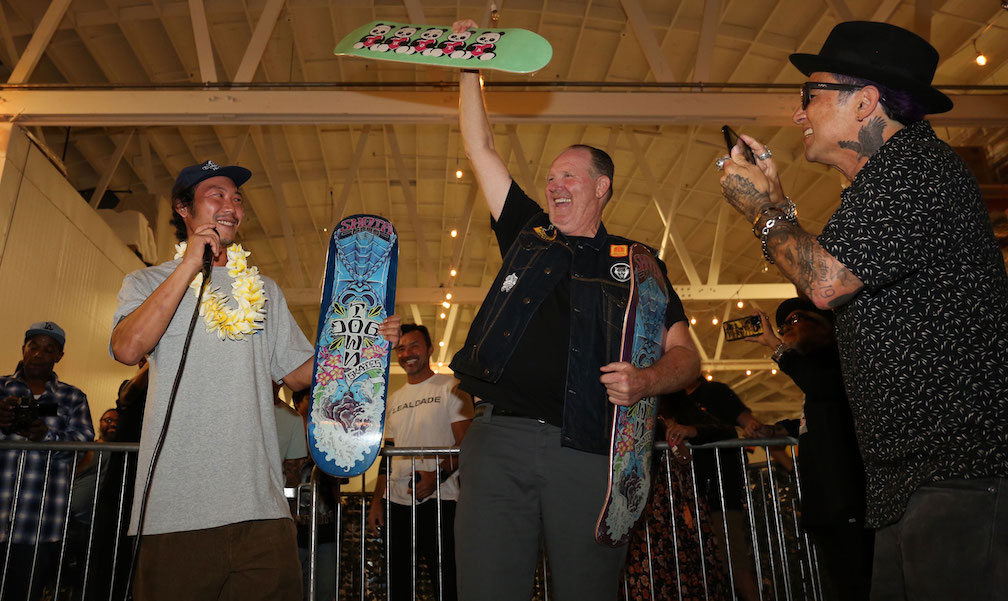 Dogtown is a place born from the vestiges of disrepair, including the remnants of the infamous Pacific Ocean Park Pier. What was once a family friendly amusement epicenter turned into a playground for a very different surf skate family whose unwitting impact on the world is still felt till this day.

Surfing, as an activity, relies on the majestic unpredictable power of the ocean and P.O.P. was where the surf skate style seed was planted in the lexicon of skateboarding culture. It was more than a surf break. It was a performance-based proving ground that was all about aggression, attitude, passion, pride, and the pure drive to get the perfect wave amidst an atmosphere of danger and chaos.

Steeped into the sacred grounds of Dogtown are the unwritten laws of the streets and there are those who are unofficially elected to uphold and enforce them. From the outside looking in, it would appear danger and chaos rule the sacred grounds in skateboarding tradition and rites of passage are a guiding force. You have to earn it every day in Dogtown and making it to the head of the pack comes with more than just being good on a board.

Shogo Kubo was the epitome of style, and he made you always want to be your best around him. The thing about Shogo was that he could be completely wild and crazy and calm at the same time and his demeanor always commanded respect in any situation.

After moving to Hawaii, Shogo continued to surf and skate and got married to his wife, Michiyo, and they had two kids – his daughter, Meagan and his son, Shota. Shogo’s skateboarding style and Dogtown legacy is now being carried on through his son, Shota Kubo.

Shota Kubo skates like a terrain assassin with calculated and precise control of his weapon constructed of pressed maple veneers emblazoned with the mark of Dogtown. Built from the grit of the streets, the mark of the skate warriors who shed blood and pioneered the surf skate style of Dogtown only bequeath the mark to those who earn it.

On September, 16, 2022, Shota Kubo was knighted into an elite club by the founding statesmen of skateboarding, forever cementing his life’s work into the distinction of merit we define as Dogtown. While Shota’s father, Shogo, was being honored with a tribute skateboard to celebrate his contributions to our culture, Shota was unknowingly about to hit a milestone very few achieve.

Jim “Red Dog” Muir, founder and fearless leader of Dogtown Skateboards and maestro of surf skate culture, hosted what was to become one of the most significant nights in skateboarding history with the presentation of the Shogo Kubo tribute board. The artwork created to celebrate Shogo was emitted with heart and soul by the legendary artist, Axis, who honored this opportunity by bringing some of his best work to date, respecting the traditions on which Dogtown was built.

In the traditional style of talk story, Aaron “Fingers” Murray, Pat Ngoho, Pops Hosoi, Lonny Hiramoto, Christian Hosoi, and Jeff Ho all paid tribute with speeches in honor of Shogo, sharing experiences from their time together. This tradition of sharing culture is in the DNA of surfing and skating that we guard and cherish, and this night of celebration and respect further enriched the moments that followed.

Eric Dressen, who is undeniably one of the best skaters to rise from the gritty streets to a globally recognized force in skateboarding, took to the stage to the soundtrack of admiring applause by the incredible crowd on hand. Under the cloak of what was thought to be a tribute speech about Shogo Kubo, Eric began to speak as Shota unsuspectingly stood behind the stage listening.

With one sentence, Eric changed Shota’s life forever with the ultimate surprise simply saying, “We are not only here to honor Shogo Kubo and the new board release and beer, we are here to celebrate his son, Shota Kubo – continuing the family legacy, the new Dogtown pro, Shota Kubo!”

As the crowd erupted with cheers of validation, Jim Muir held a skateboard over his head and Shota stood speechless and in total shock, as he was honored with the well-deserved status of pro skater for Dogtown Skateboards. As Red Dog stated, “I want to personally tell you how much I love Shota Kubo. He’s family and I am so proud to have the honor to give him this pro model skateboard.”

While Shota’s face displayed elation, his eyes told the story of years of hard work paying off and a sense of focused determination confirming that he is ready for more and looking forward to what’s to come.

Shota has not had it easy in his path to validation. The passing of his father in 2014, sent him on a journey of self discovery that led Shota from Hawaii to California, where we were lucky enough to experience the beginning of this chapter of his life that would lead to this night.

Shota is amazingly talented and honors the traditions of Venice by bringing all he has every time he rides and constantly improving every session with a devout determination that brings his skating to levels many hope to achieve. Shota Kubo is a name that will continue to define what it means to be Dogtown and his legacy will be uniquely his own and we are proud and honored to have been in attendance for his knighthood into the elite status of Dogtown Pro.

In the words of his father, Shogo Kubo, “Style is everything,” a statement which helped define the Kubo legacy and the culture of skateboarding that resonates in the skating of Shota today. In the words of Shota Kubo, “It seems like the only way to get through it is by helping each other. If you help everyone, everyone will help you back and it’s all good,” and we agree.

Congrats to Shota Kubo for going Pro AF for Dogtown and helping to build on the traditions of skateboarding. The Kubo legacy will continue to be celebrated with Shota’s selfless approach and one of a kind warrior style now and into the future. We can’t wait to see what Shota contributes to skateboarding with the officially earned title of professional skateboarder.