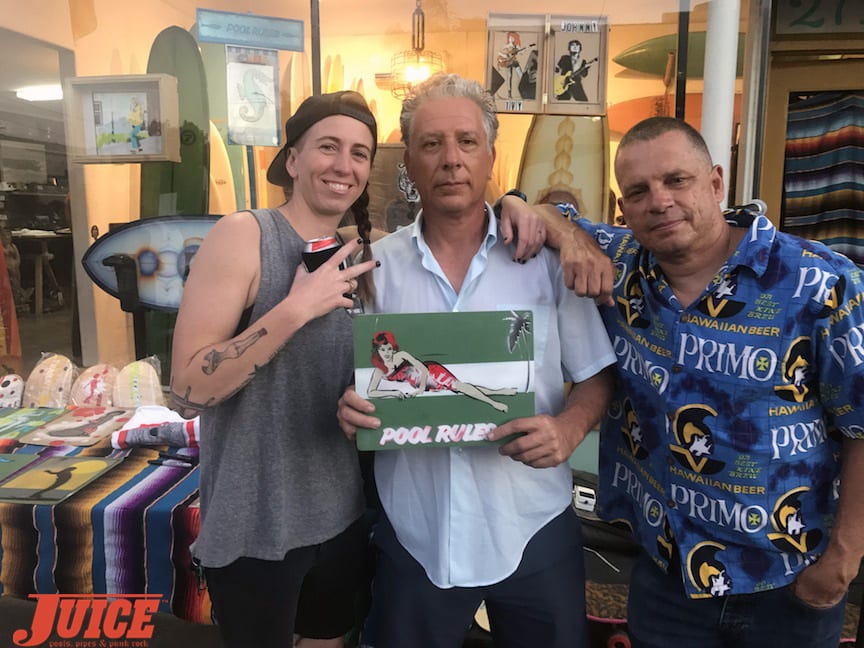 Seventh Wave Surf Shop hosted an awesome in-store event with Steve Alba, and Brian Brannon of JFA, last Friday, July 28th, 2017, organized by the amazing Kelli Koller, owner of the only surf shop in Long Beach, California! Salba painted skateboards, displayed new artwork, signed his interview in the new issue of  Juice Magazine, jammed with Brannon (who also sang a heartfelt duet of “Bad Bad Leroy Brown” with his daughter Bella Brannon) during the 4th Street Long Beach  celebration. Super stoked! It was a cool evening with friends and family coming through to meet these OG rippers, supporting the shop, and the core surf/skate/music/art community of the LBC and grabbing complimentary copies of Juice Magazine (#75) featuring Scott Oster on the cover with photo by Arto Saari. Seventh Wave Surf Shop is a true independent, grassroots surf shop with a solid inventory of handcrafted surfboards, top-quality equipment and soft goods, located at 2714 E. 4th Street, Long Beach, CA 90814, and Juice Magazine was so amped to work with Kelli Koller and the Long Beach crew on this rad show and we look forward to many more into the future. Stay tuned for the next #4thfriday celebration at Seventh Wave Surf Shop on August 25th with Tony Alva and his new band His Eyes Have Fangs!  ???

Photos and filming by Dan Levy 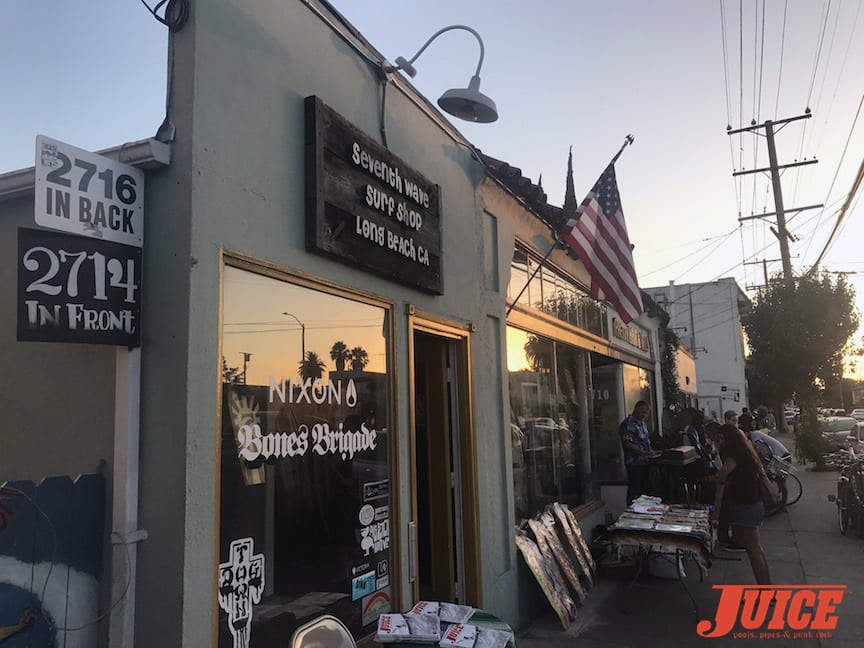 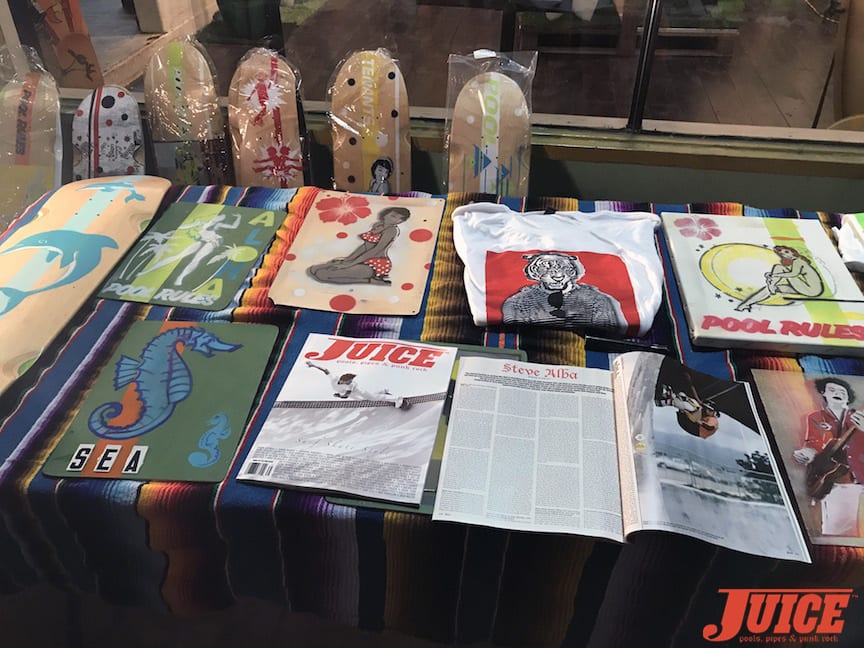 Salba art and his spread in the new Juice Magazine. 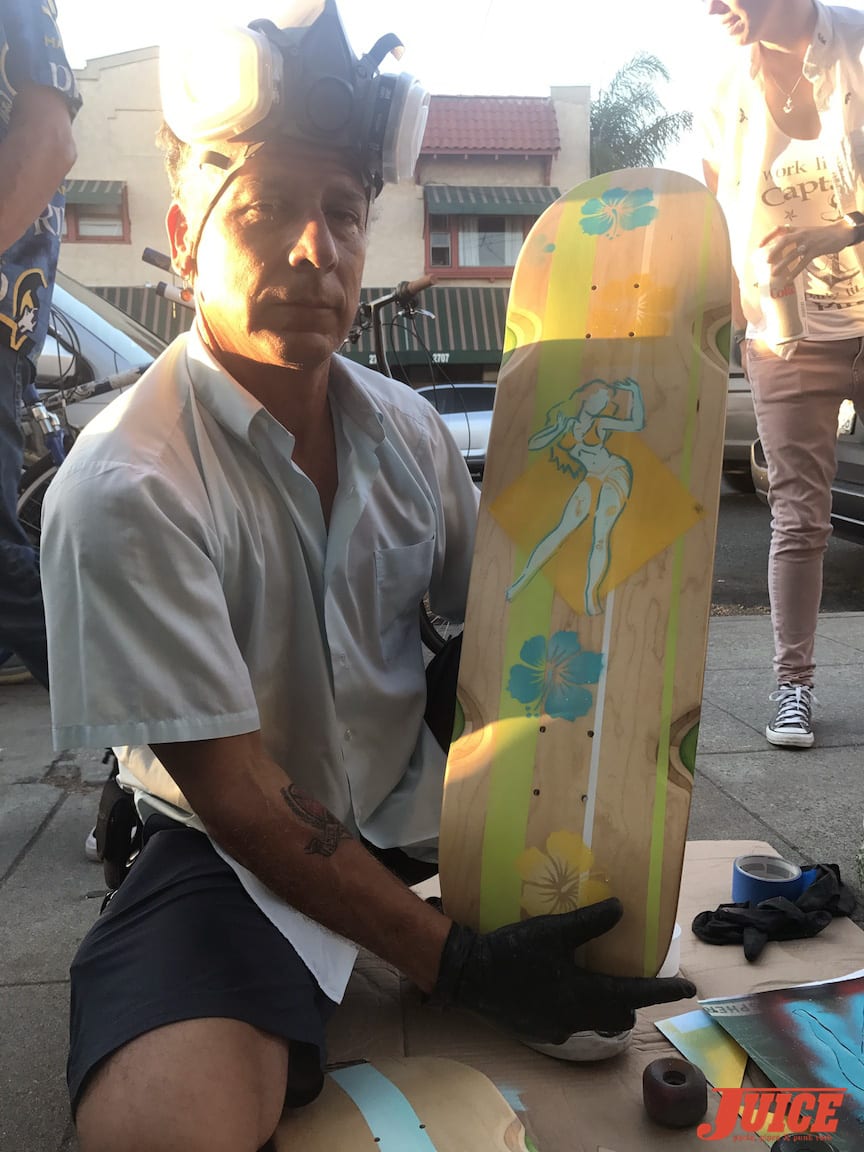 Salba with one of his handpainted skateboards. 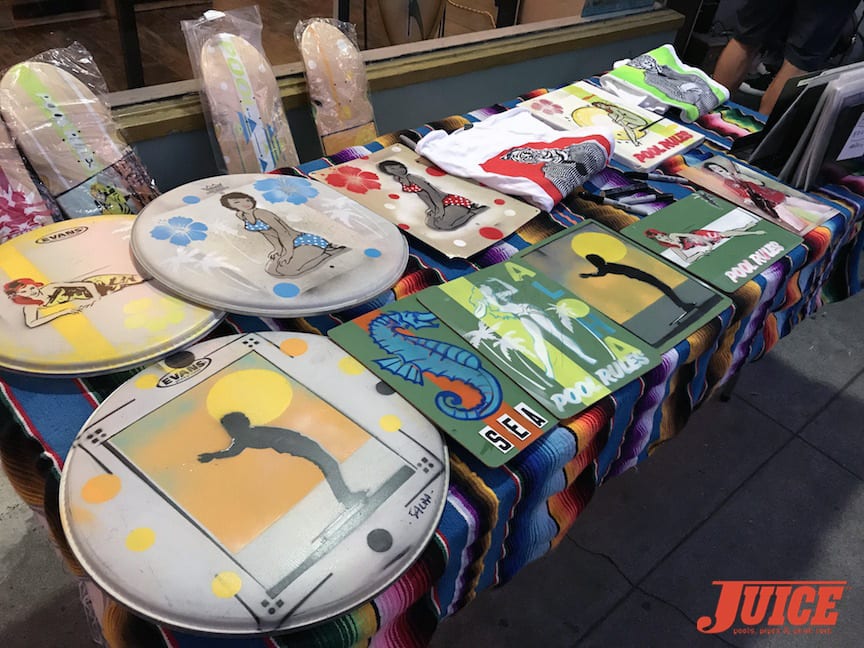 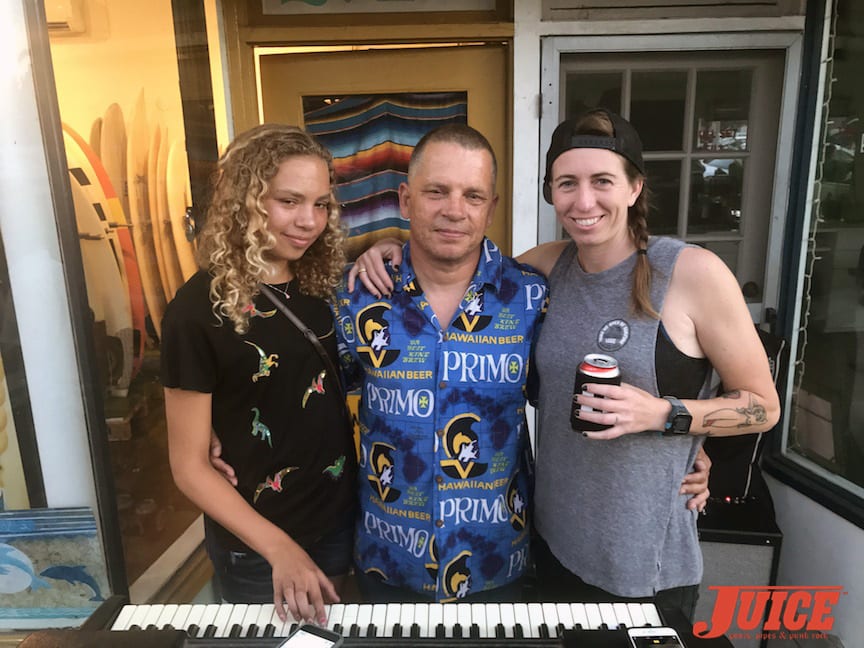 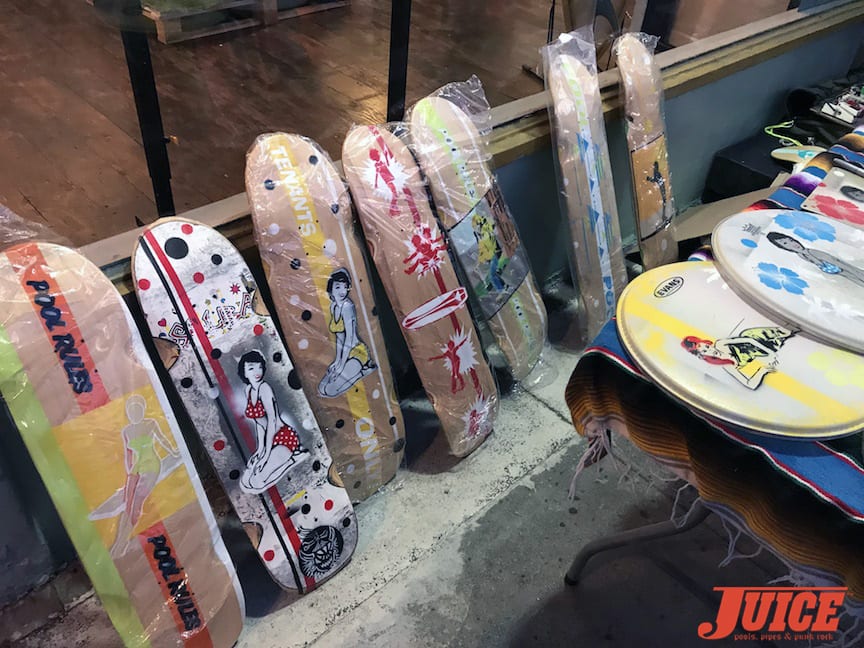 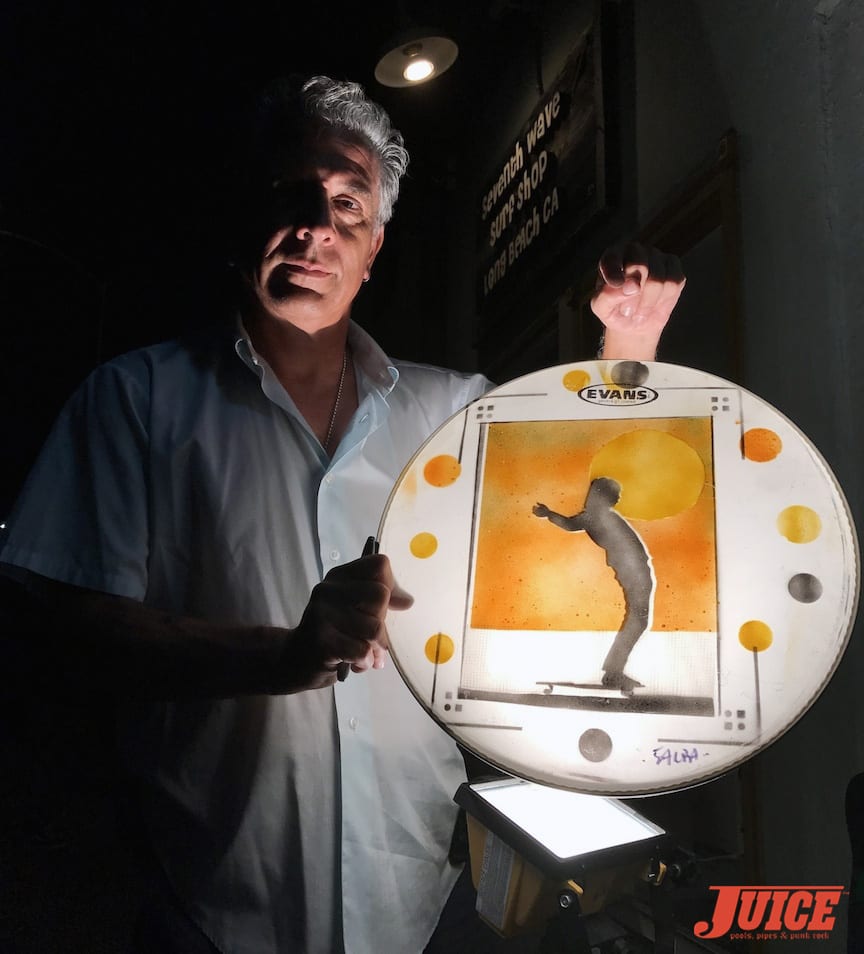 Salba original painting on drum head based on a photo of Bob Nishi. 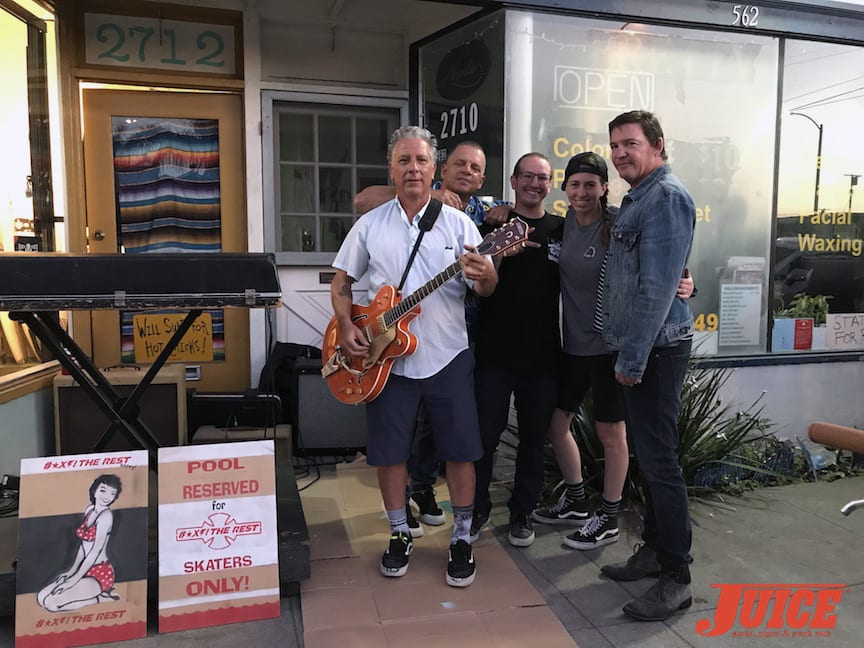 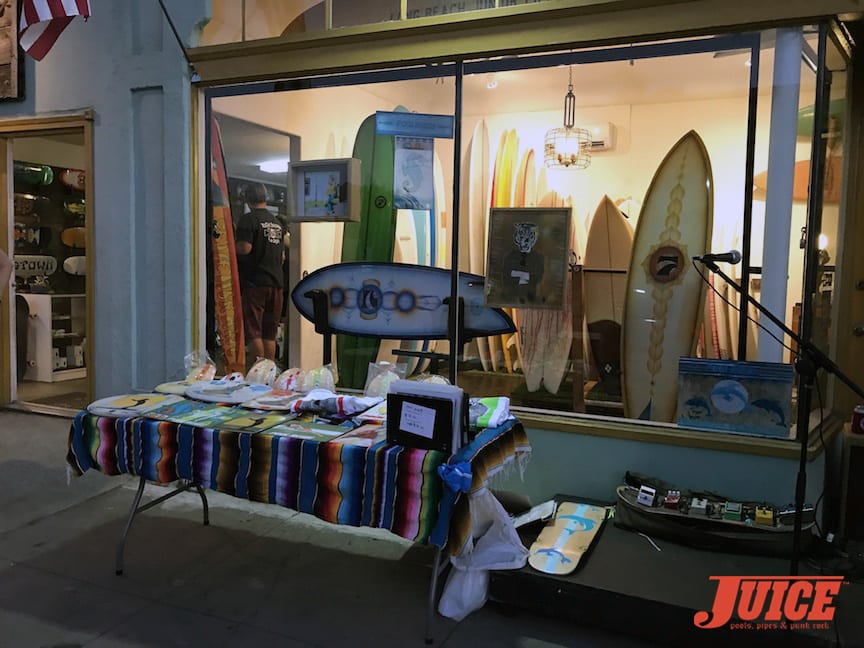 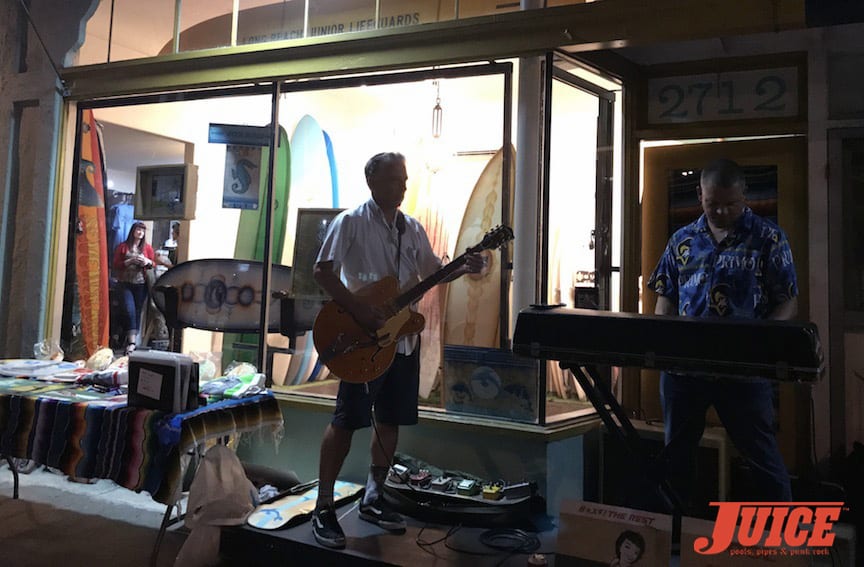 Salba and Brannon jam on 4th Street in the LBC. 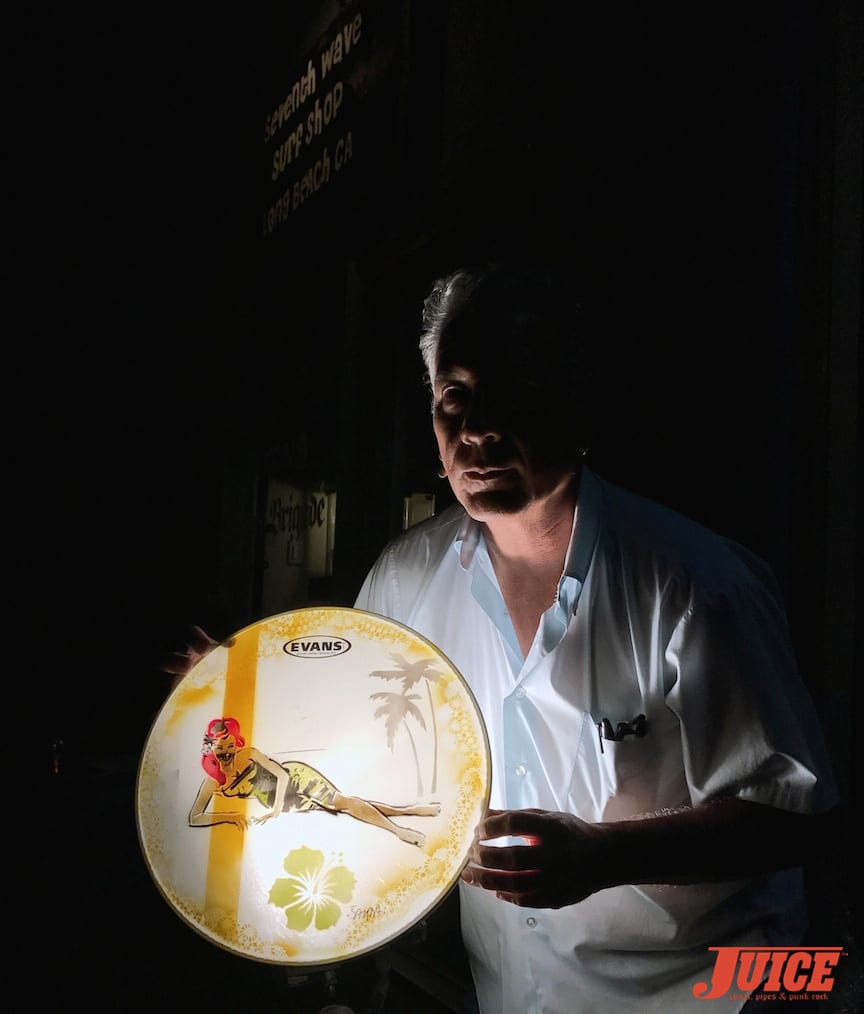 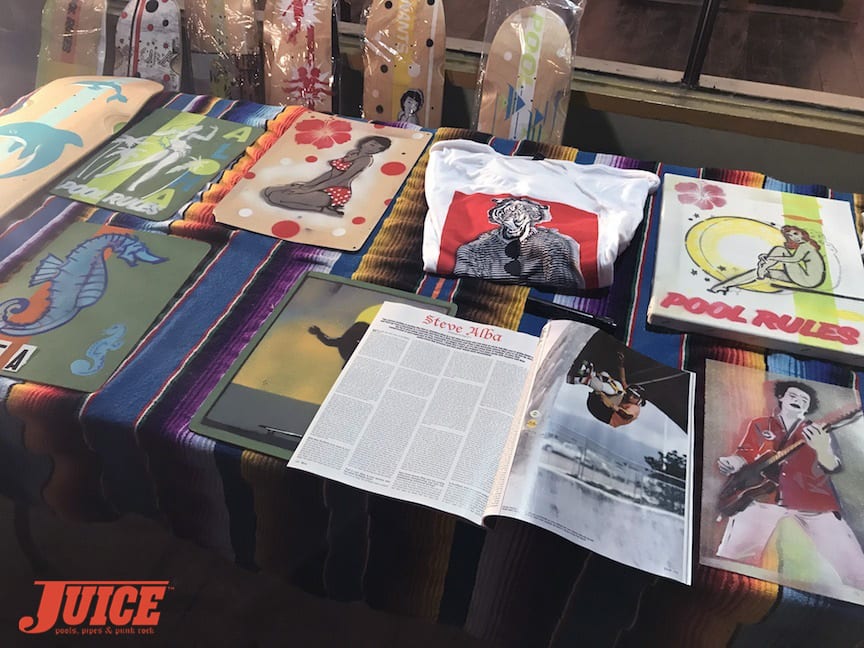 “The closest feeling of surfing like that is skateboarding in a full pipe because you can kind of carve low like you’re going down a line, and then go from a backside to a frontside and then hit a little frontside and then a big backside almost like you’re on the lip, because the lip is also going over vert too, especially in bigger waves, so it’s the same kind of feeling. To have that compression is very important in both aspects. I think that’s why the original surf guys made that happen and they understood that process and just your whole body positioning.” – STEVE ALBA

Check out a sneak peak of Juice Magazine #75 here. 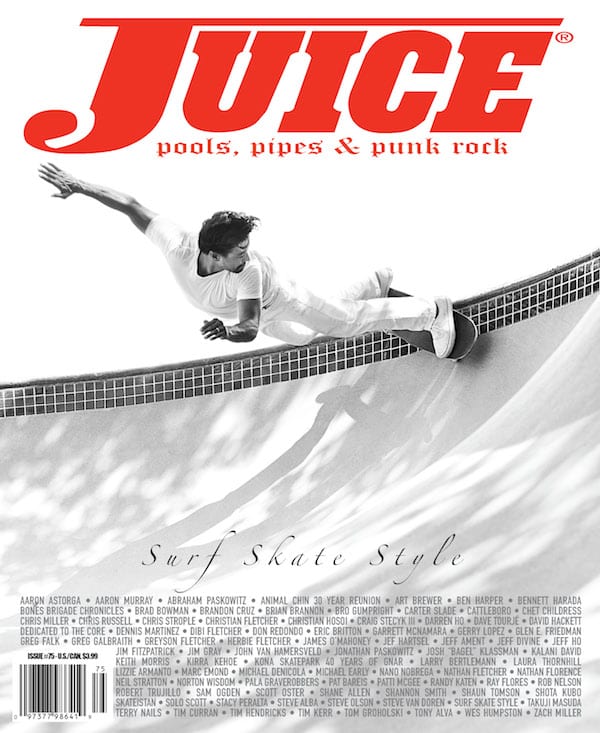 In the back of Seventh Wave Surf Shop, there lives a cool surf/skate art gallery called Sound and Sea. Here are a few photos from their most recent exhibit. See more from Sound and Sea Gallery here. 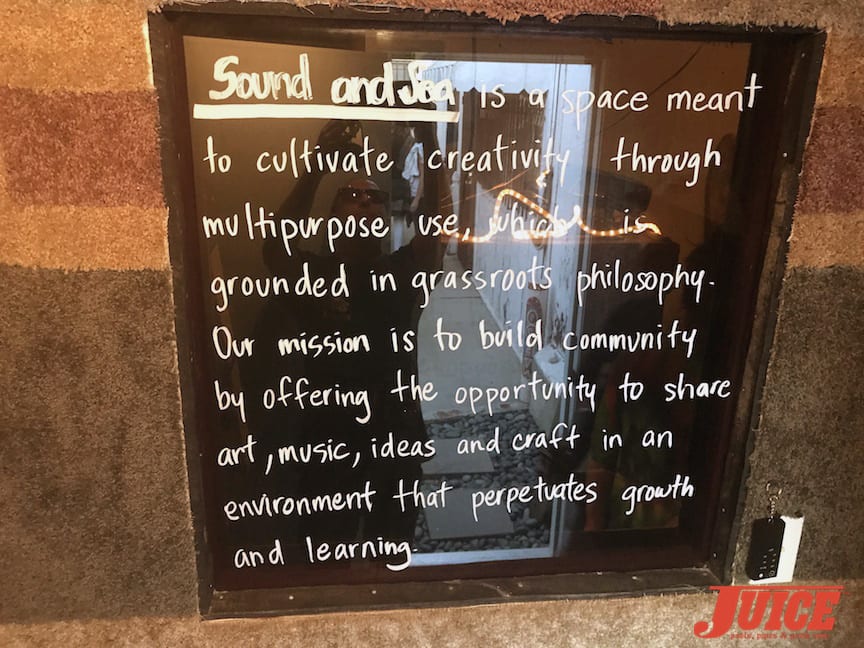 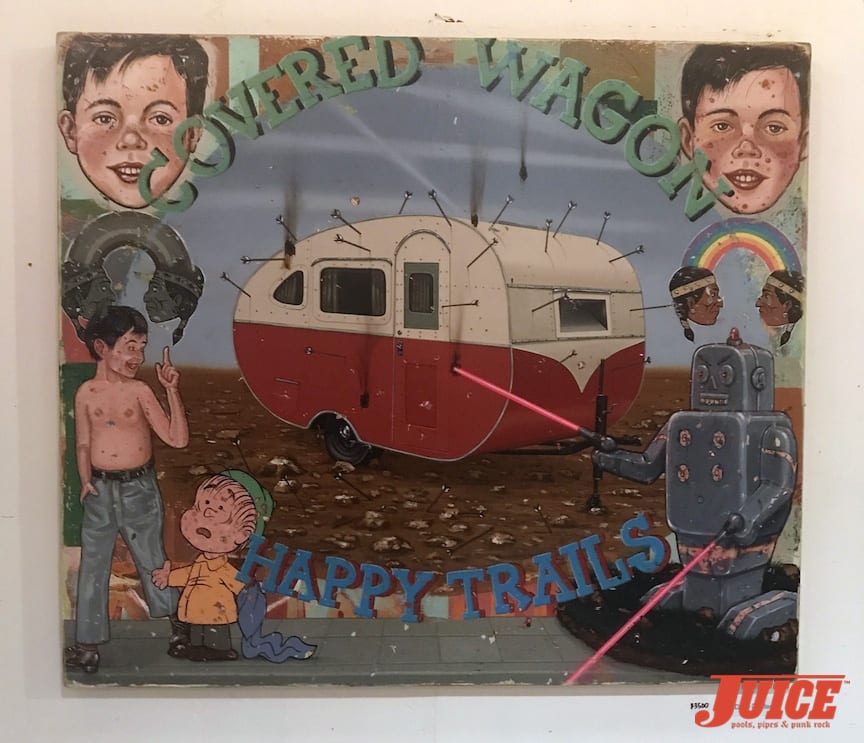 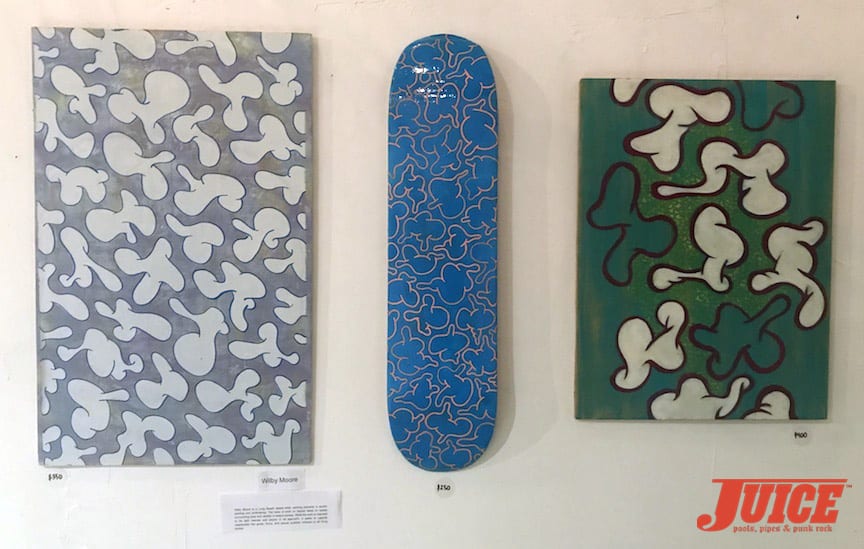 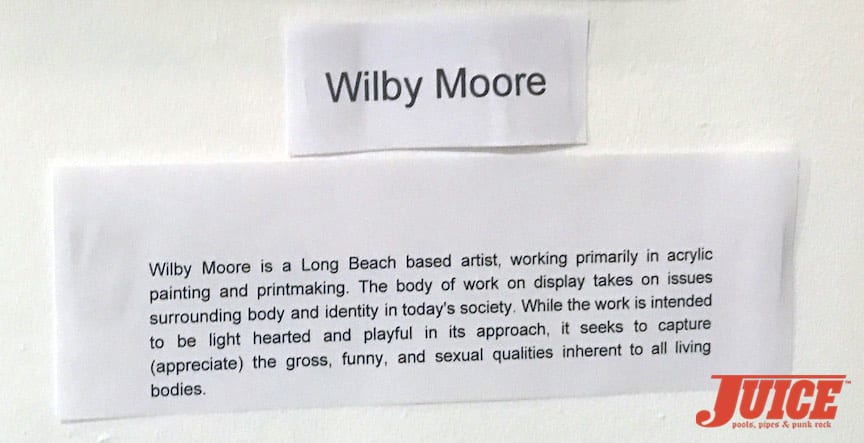 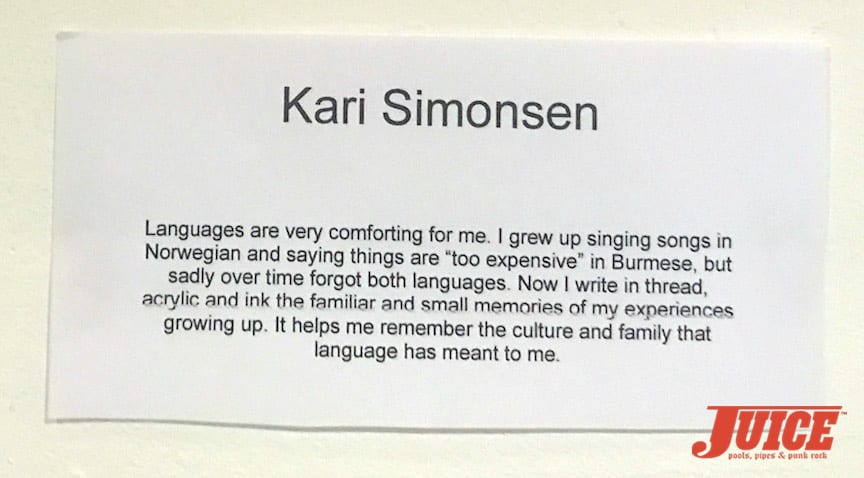 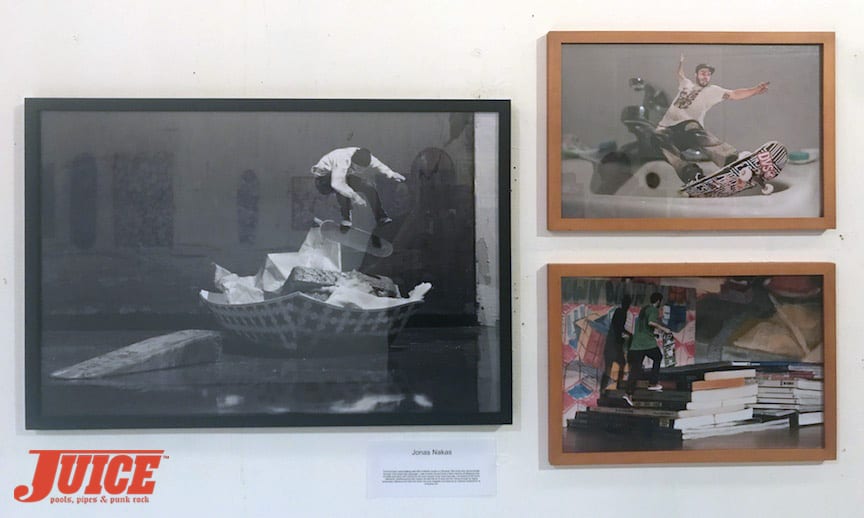 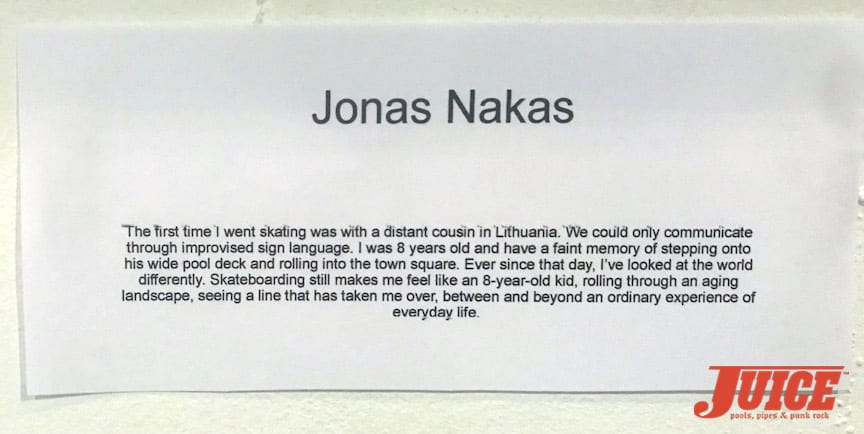 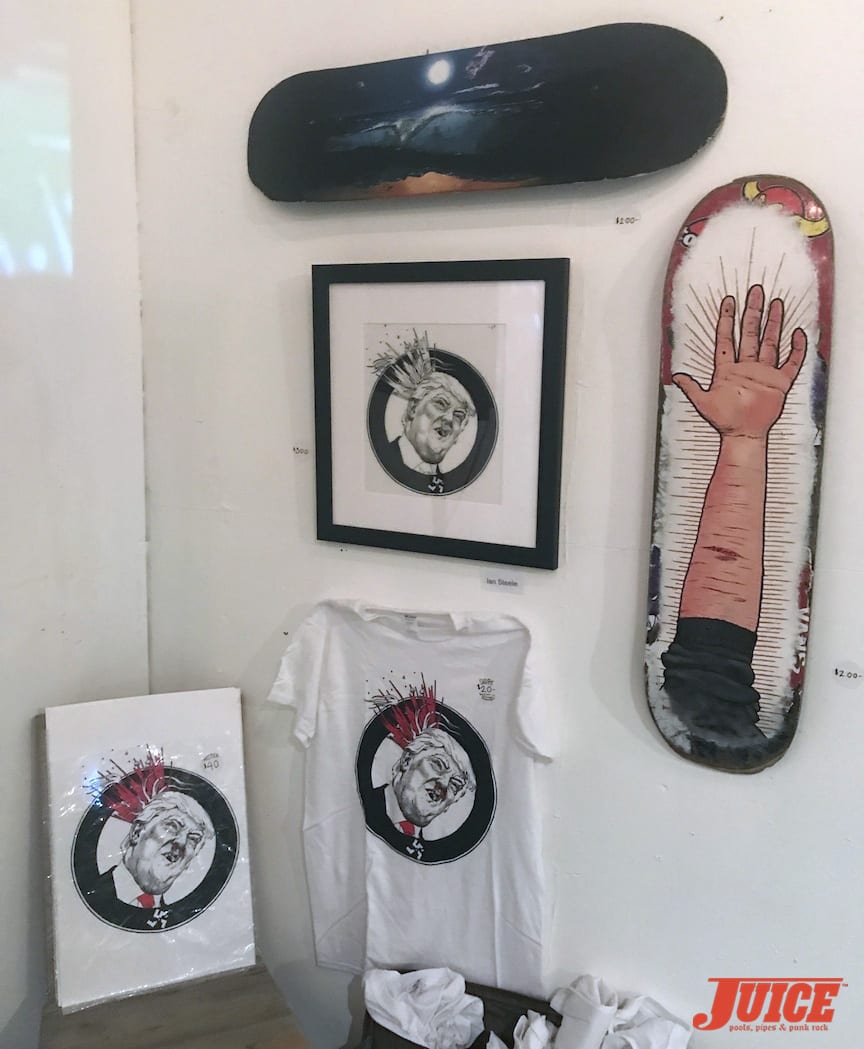 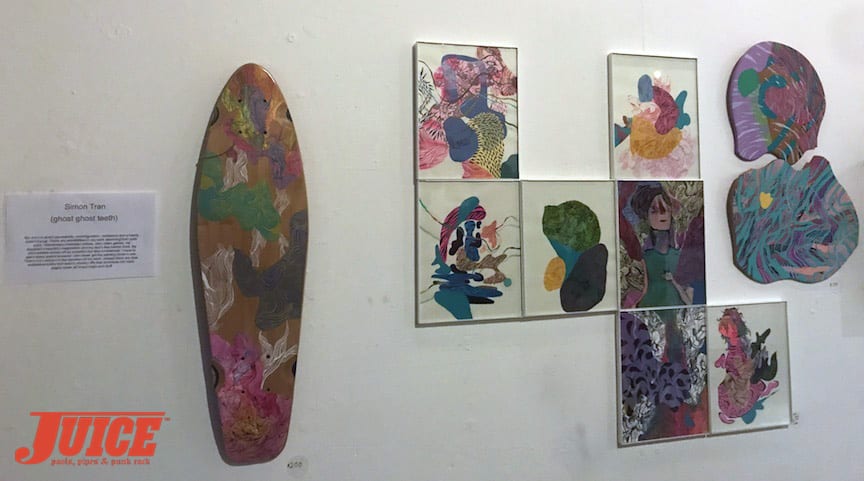 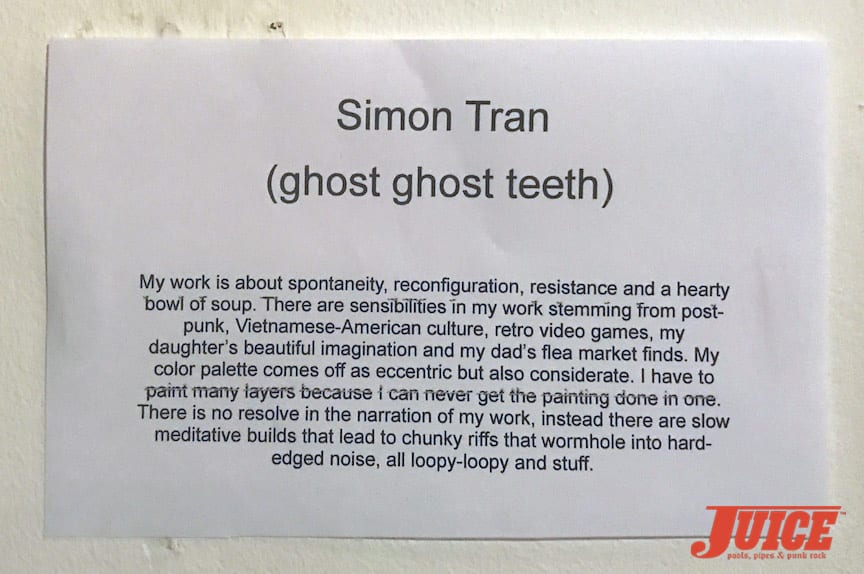 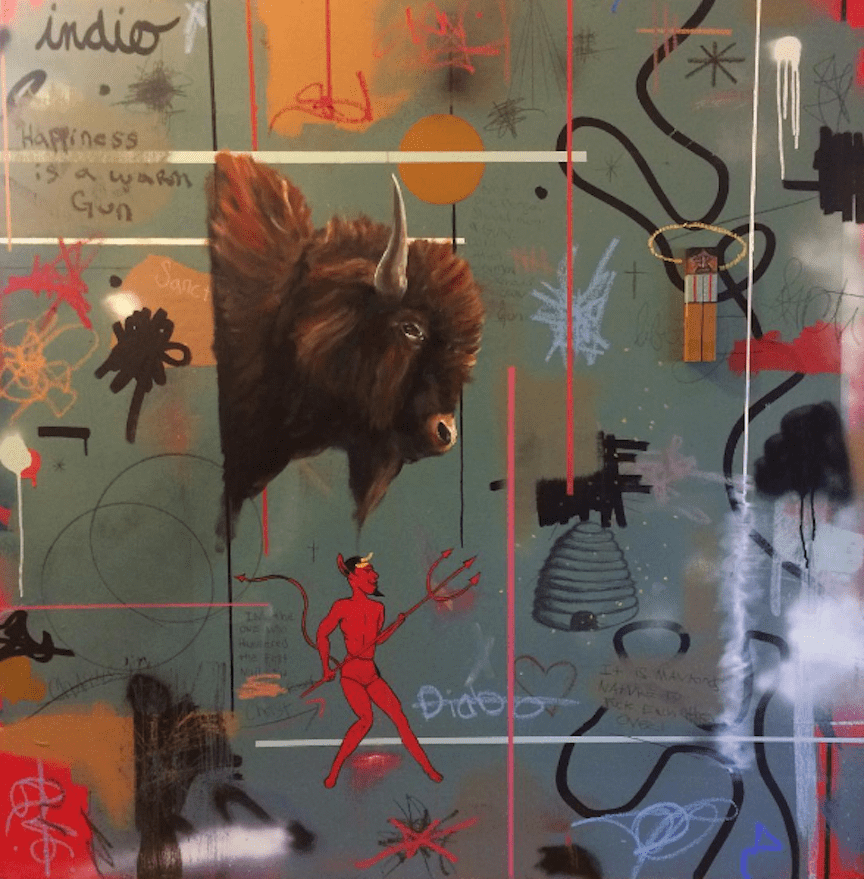 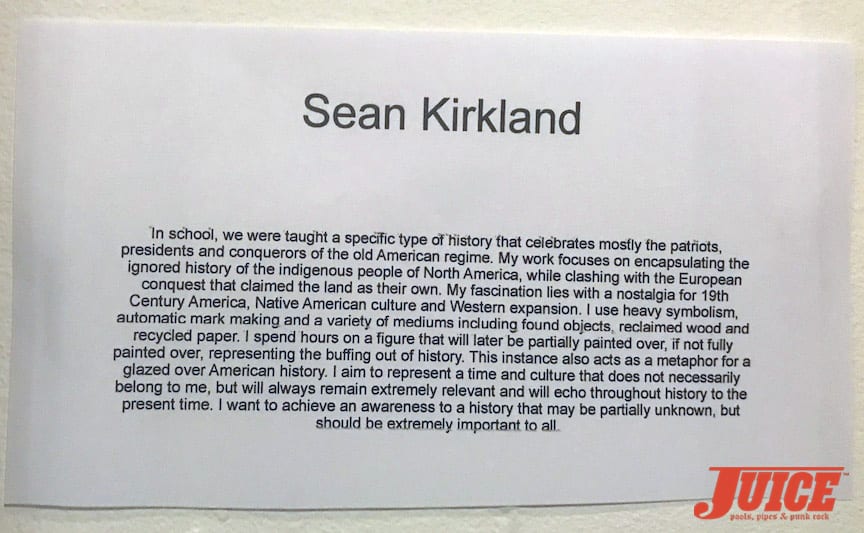