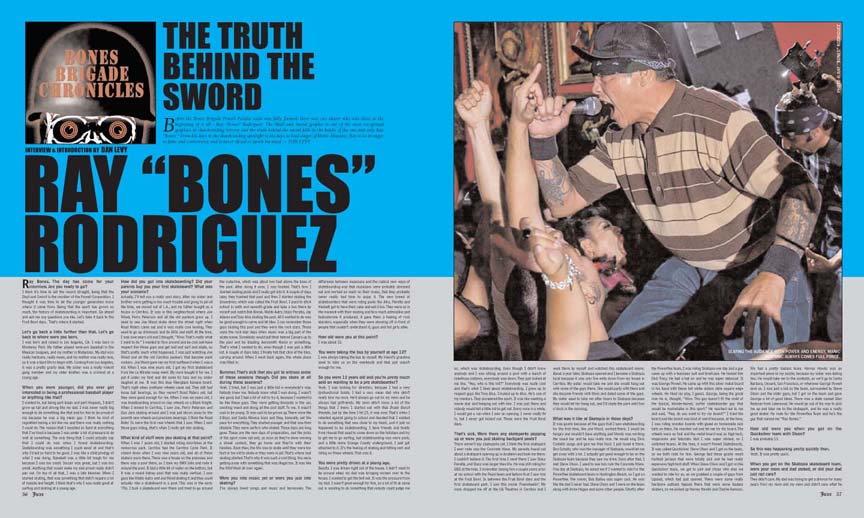 Before the Bones Brigade Powell Peralta team was fully formed, there was one skater who was there at the beginning of it all – Ray “Bones” Rodriguez. The Skull and Sword graphic is one of the most recognized graphics in skateboarding history, and the truth behind the sword falls in the hands of the one and only Ray “Bones.” From his days in the skateboarding spotlight to his days as lead singer of Manic Hispanic, Ray is no stranger to fame and controversy, and is never afraid to speak his mind.

“I play punk rock music and I’m climbing the ladder of 50 with skateboard models still coming out and new records coming out. I’m playing punk rock and raising kids. I have a two-year-old and a five-year-old. I’m still living the dream.”

Ray Bones. The day has come for your interview. Are you ready to go?
I think it’s time to set the record straight, being that the Skull and Sword is the moniker of the Powell Corporation. I thought it was time to let the younger generation know where it came from. Being that the sport has grown so much, the history of skateboarding is important. Go ahead and ask me any questions you like. Let’s take it back to the Fruit Bowl days. That’s where it started.

Let’s go back a little further than that. Let’s go back to where were you born.
I was born and raised in Los Angeles, CA. I was born in Monterey Park. My father played semi-pro baseball in the Mexican Leagues, and my mother is Malaysian. Coming from Los Angeles, it was a pretty gnarly deal.

When you were younger, did you ever get interested in being a professional baseball player?
I wanted to, but being part Asian and part Hispanic, I didn’t grow up tall and strong like my dad. The reason that I excelled so hard at everything that I’ve tried is because I was under a lot of pressure to do well at something. The only thing that I could actually say that I could do was when I found skateboarding. Skateboarding was something I could excel at and that’s why I tried so hard to be good. I was like a child prodigy of what I was doing. Baseball was a little bit tough for me because I was too small. Soccer was great, but I was too small. On top of all that, I was a late bloomer. When I started skating, that was something that didn’t require a lot of muscle and height. I think that’s why I was really good at surfing and skating at a young age.

How did you get into skateboarding? Did your parents buy you your first skateboard? What was your scenario?
Actually, I’ll tell you a really cool story. We moved out of L.A., and my father bought us a house in Cerritos. It was in this neighborhood where Joe Wood, Perry Peterson and all the old punkers grew up. I used to see Joe Wood skate down the street right when Road Riders came out and it was really cool looking. They used to go up driveways and do 360s and stuff. At the time, I was nine years old and I thought, “Wow. That’s really what I want to do.” I wanted to flow around and be cool and have respect like those guys and get laid and surf and skate, so that’s pretty much what happened. I was just watching Joe Wood and all the old Cerritos punkers that became punk rockers. Joe Wood gave me my first surfboard when I was a kid. When I was nine years old, I got my first skateboard from the La Mirada swap meet. My mom bought it for me. I put it under my feet and did some tic tacs and my sister laughed at me. It was this blue fiberglass banana board. That’s right when urethane wheels came out. They still had loose ball bearings, so they weren’t Road Riders yet, but they were good enough for me. When I was six years old, I was kneeboarding around on clay wheels on a Black Knight. When I moved to Cerritos, I saw Joe, Perry Peterson and Gus Jara skating around and I was just blown away by the smooth new wheels and precision bearings. I think the Road Rider 2s were the first real wheels that I saw. When I saw those guys riding, that’s when I really got into skating.

What kind of stuff were you skating at that point?
When I was seven years old, I started riding mini-bikes at the motocross park. Cerritos had the Cerritos Cycle Park. It closed down when I was nine years old, and all of these skaters were there. There was a house on the premises and there was a pool there, so I took my BMX bike and rode it around the pool. It had a little bit of water on the bottom, but it was a round kidney pool that was really vertical. I saw guys like Waldo Autry and Joe Wood skating it and they could actually ride a skateboard in a pool. This was in the early ‘70s. I took a skateboard over there and tried to go around the waterline, which was about two feet above the base of the pool. After doing it once, I was hooked. That’s how I started skating pools and I really got into it. A couple of days later, they trashed that pool and then I started skating the Greenbrier, which was called the Fruit Bowl. I used to ditch school in sixth and seventh grade and take a bus there by myself and watch Bob Biniak, Waldo Autry, Stacy Peralta, Jay Adams and Tony Alva skating the pool. All I wanted to do was be good enough to carve and hit tiles. I can remember those guys skating this pool and they were like rock stars. Those were the rock star days when music was a big part of the skate scene. Somebody would pull their hotrod Camaro up to the pool and be blasting Aerosmith Rocks or something. That’s what I wanted to do, even though I was just a little kid. A couple of days later, I finally felt that click of the tiles, carving around. When I went back again, the whole place was filled in.

Bummer. That’s sick that you got to witness some of those sessions though. Did you skate at all during those sessions?
Yeah. I tried, but I was just a little kid in everybody’s way. Nobody knew me. Nobody knew what I was doing. I wasn’t any good, but I had a lot of will to try it, because I wanted to be like these guys. They were getting blowjobs in the car, smoking weed and doing all the cool stuff. To me, it wasn’t cool to be young. It was cool to be grown up. There were the Z-Boys and Santa Monica boys and they, basically, set the pace for everything. They started younger and that was their lifestyle. They were surfers who skated. Those days are long gone. These are the new days of preparation, and the jocks of the sport come out and, as soon as they’re done winning a street contest, they go home and they’re with their families. Back then, the life was to skate until they were too hurt or too old to skate or they were in jail. That’s where real skating started. That’s why it was such a cool thing. You were getting away with something that was illegal too. It was like the Wild West all over again.