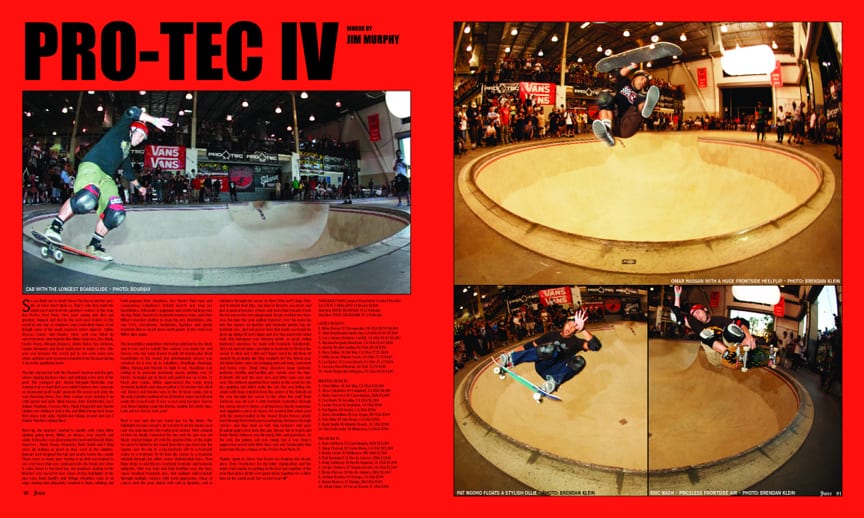 So you think vert is dead? Steve Van Doren and the people at Vans don’t think so. That’s why they built the combi pool and host the gnarliest contest of the year, the ProTec Pool Party. Vert, pool coping and tiles get grinded, slapped and slid by the best pool skaters in the world in one day of complete semi controlled chaos. Even though some of the usual suspects where injured – Salba, Grosso, Lance and Duane- their void was filled by out-of-towners and legends like Nicky Guererro, Eric Nash, Lester Kasai, Morgan Burgess, Adam Taylor, Tim Johnson, Lonnie Hiramoto and Buck Smith just to name a few. This was cool because the crowd got to see even more new styles and lines and even more legends from the past mixing it up in the qualifying heats.

“So you think vert is dead? Steve Van Doren and the people at Vans don’t think so. That’s why they built the combi pool and host the gnarliest contest of the year, the ProTec Pool Party. Vert, pool coping and tiles get grinded, slapped and slid by the best pool skaters in the world in one day of complete semi controlled chaos.”

The day started out with the Women’s division and the girls where ripping hardcore lines and utilizing every inch of the pool. The youngest girl, Alysha Bergado Montclair was tearing it up so hard that you couldn’t believe how someone so young and small could generate the power and style she was throwing down. The other woman were tearing it up with speed and style. Mimi Knoop, Julie Kindstrand, Lyn-Z Adams Hawkins, Cressey Rice, Heidi Fitzgerald and Amelia Linden were killing it and in the end Mimi Knoop took home first place with Julie Kindstrand taking second and Lyn-Z Adams Hawkins taking third.

Next up, the masters started to qualify with some killer skating going down. Miller, as always, was smooth and stylin. Schroeder was destroying the bowl and himself. Nicky Guerrero, Nash. Kasai, Hiramoto, Buck Smith and T Mag were all skating as good as they were in the eighties. Duncan acid dropped the hip and nearly broke the combi! There were so many guys tearing it up that you wanted to see a lot more than you could pack into the finals, but when it came down to the final ten, the gnarliest skating of the Masters was saved for last. Some of they highlights of the jam were Buck Smith’s and T-Mags relentless runs of on edge skating that ultimately resulted in them colliding and both popping their shoulders, Eric Nash’s fluid runs and consistency, Caballero’s frontal inverts and long ass boardslides, Schroeder’s eggplants and switch taildrop onto the hip, Nicky Guererro’s frontside boneless ones, and Chris Miller’s monster shallow to deep hip airs, bluntslides, ollie oop 5-0s, crossbones, fastplants, lipslides and gnarly frontside ollie to smack down smith grinds. In the end it was Miller time again.

The boardslide competition started up right before the finals and it was rad to watch! This contest was made for Jeff Grosso who has been known to pull off twenty plus block boardslides in the round, but unfortunately Grosso was wrecked. So it was up to Caballero, Steadham, Reategui, Miller, Barnes,and Harada to fight it out. Steadham was rolling in to generate maximum speed, getting over 12 blocks. Reategui got in there and pulled one up in the 12 block plus range. Miller approached the comp doing frontside lipslides and almost pulled a 13 blocker but rolled out. Barnes and Harada were in the 10 block range, but in the end, Caballero pulled off an 18 blocker super smooth and made the crowd roar! It was a cool comp because Grosso was there helping count the blocks, smiling the whole time. Look out for Grosso next year!

Next it was onto the pro warm ups for the finals. The highlights became Sergie’s air transfer from the square pool over the main hip into the round pool section. After a bunch of tries he finally connected the line and the jam was on! Bucky started things off with the gnarliest line of the night. He aired to fakied in the round then did a gay twist into the square over the hip to a big backside 540 to a frontside rodeo to a frontside 50-50 thru the corner to a frontside tailslide through the other corner. Unbelievable lines. Then Rune drops in and throws overhead frontside and backside tailgrabs, Ollie oop Indy and Indy kickflips over the hips, super tweaked frontside airs, and multiple slides/grinds through multiple corners with total aggression. Omar of course had the pool dialed with roll in lipslides, roll in tailslides through the corner to fakie (Why not?) huge 540s and frontside heel flips, any kind of disaster you need, and just a general mastery of lines and tricks that it made it look like he was in his own playground. Sergie worked new lines over the hips this year pulling transfers over the main hip into the square via lipsldes and frontside grinds, big ole backside airs, and sick power lines that made you forget he grew up riding VB vert ramps and now has mastered round wall. Bob Burnquist was blowing minds as usual, riding backward anywhere he could with frontside Caballerials, 360 rock and roll slides, and fakie to frontside 50-50 thru the corner to fakie and I still can’t figure out if he did them all switch! He probably did. Why wouldn’t he? The fifteen year old Adam Taylor came out swinging and rode long, consistent and bionic runs. Blunt fakie disasters huge backside methods, kickflip and heelflip airs, varials over the hips, frontside 360 pick the nose airs, just killer runs over and over. Tim Johnson qualified first earlier in the week for the pro qualifier, but didn’t make the cut. Tim was killing the combi with huge stalefish from the center of the flatwall all the way through the corner to the other flat wall! Benji Galloway was all over it with frontside rockslides through the corner, invert to fakies, crail disasters, big ole madonnas and eggplant reverts at speed. He worked that whole pool with the sickest mullet in the house! Bruno Passos grinds hard through that whole pool covering big distances through corners and hips loud as hell. Big bodyjars and pure Brazilian aggression fuels this guy. Always fun to watch and learn. Nolan Johnson was throwing 540s and good lines. In the end, the judges call was tough, but it was Rune’s aggression mixed with killer lines and sick technicality that made him the pro champ of the ProTec Pool Party IV.

Thanks again to Steve Van Doren for keeping the dream alive, Chris Overholser for the killer organization and the entire Vans family for putting on the best get together of the year that unites all the vert generations together for a killer time at the combi pool! See ya next year!