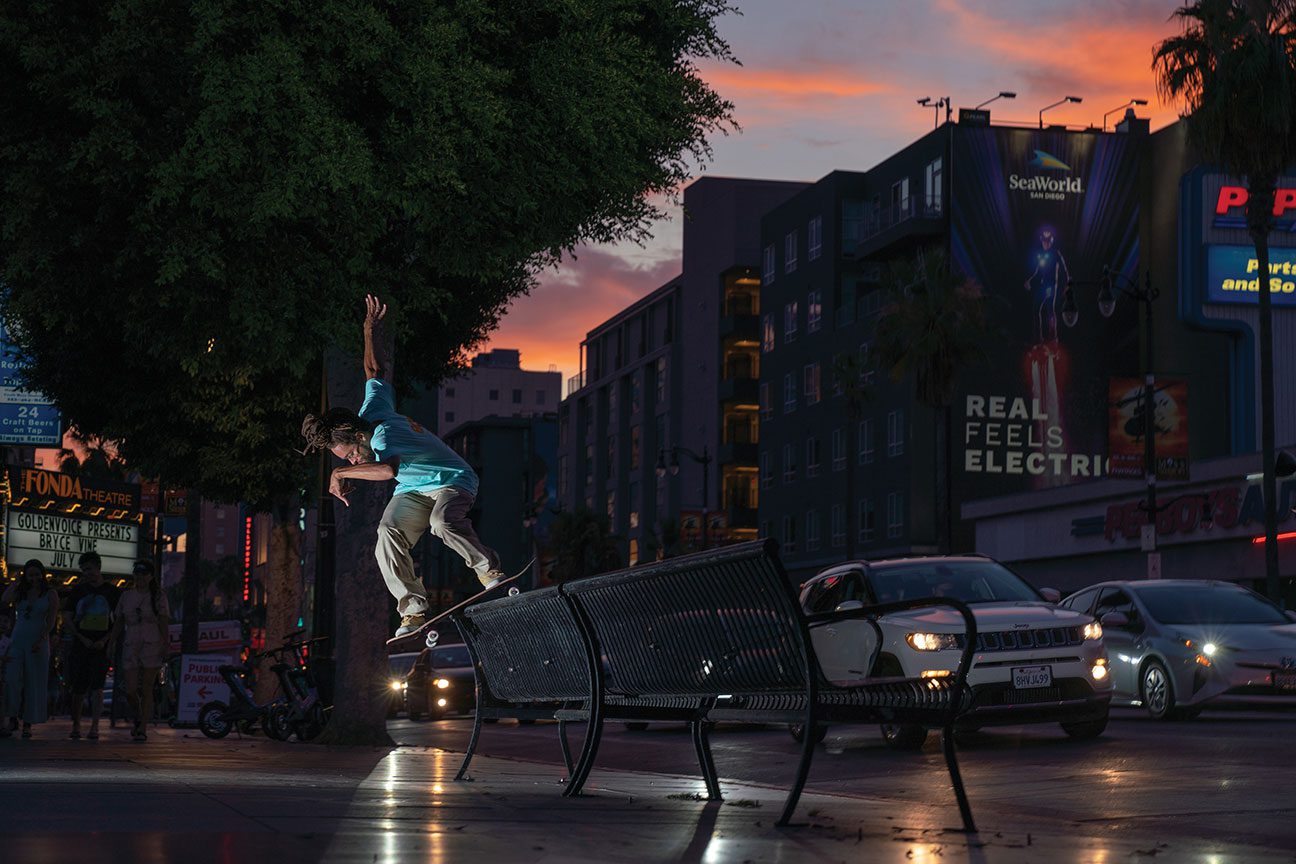 Spencer, why do you skate?

It’s just fun, bro. It’s what has made me happy my whole life. I’ve been skating for a long time and it’s just as fun as when I started, so I just want to skate.

Do you remember how you got into skateboarding?

I remember seeing a toy skateboard in a magazine when I was younger and I just wanted it and then I got it for Christmas and I fell in love with it and I kept doing it.

Do you remember what flipped the switch on for you with skateboarding?

I did a kickturn when I was really young and I thought it was a trick. I was like, “That was crazy!” The front of the board just went up and I turned a little bit. I still get that same excited feeling when I’m trying to do something hard or something I’ve always wanted to do. It’s unexplainable really.

I’m from Aurora, Colorado, originally. It’s cool out there and the parks out there are great. I grew up at Trails Recreation Center and that’s where I skated forever when I was a kid. I skated at Wheel Park before that. That’s a little bit older of a park, but shout outs to Aurora, Colorado.

When did you move to California?

When I finished college I was trying to be in warmer weather and pursue skating as much as I can. I wanted to see what was up out here and I already had some friends out here, so I was like, “I’m going to make the move and try to get a job and see what happens with skating.”

That was five years ago.

Where did you move to out here?

I moved to Koreatown first and then I ended up in Mid-City. I’ve been around there since. It’s cool.

How did you hook up with Powell?

Deville came to Westchester one night and I was skating and he asked me who I skated for. At the time, I had a board sponsor, so I sorta chilled for a while. I ended up hitting Deville up a year later to see if I could come skate with them. He was like, “Yeah. Come through.” I linked up with them and he was like, “You can try some boards if you want.” I tried ‘em and it was cool. Westchester! Best place ever. Shout out to Westchester Skate Plaza!

What did you go to school for?

I went to school for marketing and I got my little Bachelor’s degree. Being all the way real, that’s the most useless business degree. I wish I would have studied finance. After I graduated, I realized that you learn more about marketing from firsthand experience. They can teach you X, Y and Z from a book but you really learn from being around people who have businesses and weren’t afraid to make mistakes.

School of hard knocks. That works.

Yeah. I couldn’t get a job with a Bachelor’s degree in Marketing. They said, “Where is your experience?”

You seem pretty motivated. Do you ride for anyone besides Powell?

I get a little hook up through New Balance and Acid Chemical Co. Wheels out of San Diego and I get  Andale Bearings. 303 Boardshop in Colorado and Pharmacy Boardshop in Hollywood are my two board shops. I love 303. They’re cool. They’ve held me down for years. Shout outs to Pharmacy too  because they were gracious enough to allow me to maintain my relationship with 303. Shout out to 303 too because they were cool with it too. I’m from Colorado, but I live in California, so they were both cool with that, and I really appreciate both of them.

That’s love. So if you had to describe your style, how would you describe it?

I just skate for fun, honestly. I just do tricks that I like and that’s what’s cool to me. I don’t really know if I have a description for my style. I just cruise around and try stuff.

What kind of music do you like to listen to?

Mostly hip hop. I listen to a lot of rap and oldies. I like funk music from back in the day like Dazz Band and Bootsy Collins and stuff.

Yeah. For real. His music is hard. I listen to a lot of hip hop and a lot of funk and some jazz here and there too, a little low-fi hip hop instrumentals when I’m chilling.

I love funk music too. If you could have any super power what would it be?

That’s a good question. I would like the ability to regenerate and heal really quickly. I would try a lot more stuff skating if I could heal quickly and regenerate from injuries.

“I would want to be known as somebody who loved skateboarding with his whole heart and somebody who did their best to be the best human being that they could. I don’t really care about having pull in skateboarding or anything like that. Skateboarding really just makes me happy.”

That’s a good one. What do you think are your biggest challenges in life?

My biggest challenge is to not stress on small stuff. I get wrapped up in things that don’t necessarily matter and then it turns into an issue in my own head, but it’s not really existing. That’s a big thing for me that I’m working on. It’s also maintaining patience. I can be patient to a certain extent, but sometimes that’s not enough and you have to be patient more, so I’m working on consistent patience. The patience thing is no joke. I’ve been working on it my whole life.

How do you think skating helps that?

It takes my mind off of whatever is bugging me for the most part. At the same time, it can sometimes go the complete opposite direction. If I’m having a bad day skating, it might just be like, “This sucks and now this sucks too. I’m about to just go home.” When it is helping, it keeps my mind focused on what I’m doing in the present. It’s not like anything else I could be doing, like video games. It really keeps me distracted because you have to pay attention to try tricks and stuff. Even pushing down the street, you have to pay attention. If you fall, you’re extra mad.

Yeah. It’s a weird deal. I said to someone the other day, “If you want to live in the complete present, ride a skateboard.”

Exactly. That’s the best way to do it. As human beings, it’s very common to be living in the past and the future. I think living in the future is the worst. You have all sorts of hypotheticals that could happen and that’s really stressful. Skateboarding keeps me in the present.

I think a lot of people have learned, since the coronavirus pandemic, that you can’t really plan anything.

Absolutely. It’s crazy. It’s so left field for everybody. It’s terrifying, but there can be therapeutic aspects to it with the whole quarantine thing. That’s how I found out that my girlfriend and I have a really good relationship because we were locked down in this house and I was only skating two hours a day and we were co-existing perfectly. It has been therapeutic for both of us and it’s been good quality time for us both. We are in a really healthy relationship.

That’s great. So what does it mean to you to be on Powell?

It’s cool! It’s super family driven and we all skate together. It’s been chill. As far as defining what it means, it’s homies that get together and skate. If you land something, you land it. If you don’t, you don’t. That’s cool too. It’s just getting in the field and trying to make it happen and being around good people.

Where have you travelled in the world for skating?

I’ve been to China once and it was cool and so much fun. I’ve been to New York, Salt Lake City, San Francisco, Santa Barbara, San Diego and all over California. As far as stuff that is noteworthy in my mind, it was China. That was a cool experience.

I just go with the wind. Whenever someone has a plot to go skate somewhere, if it sounds cool, I’m down. Off the top, I need to visit Barcelona. That just has to happen. If you skate, you go to Barcelona at some point. I really want to go to Copenhagen too. I’ve been to Mexico on a little trip and that was really fun. I went to Ensenada. That was super close to Chula Vista, San Diego, where I was at, so we went there. It was cool. I’m pretty much down for whatever.

If you had to describe what you want your legacy to be, how would you describe it?

I would want to be known as somebody who loved skateboarding with his whole heart and somebody who did their best to be the best human being that they could. I don’t really care about having pull in skateboarding or anything like that. Skateboarding really just makes me happy. What’s really important to me is being the best person that I can be and doing something I enjoy.

Do you have shout outs you want to give?

Shout out 303. Shout out Pharmacy Hollywood and Pharmacy Boards. Shout out to my girlfriend. She has really held it down for the last few years and it’s been cool. Shout out Powell and to anybody who has ever done or said anything nice to me. That’s the real shout out. Shout out Juice.