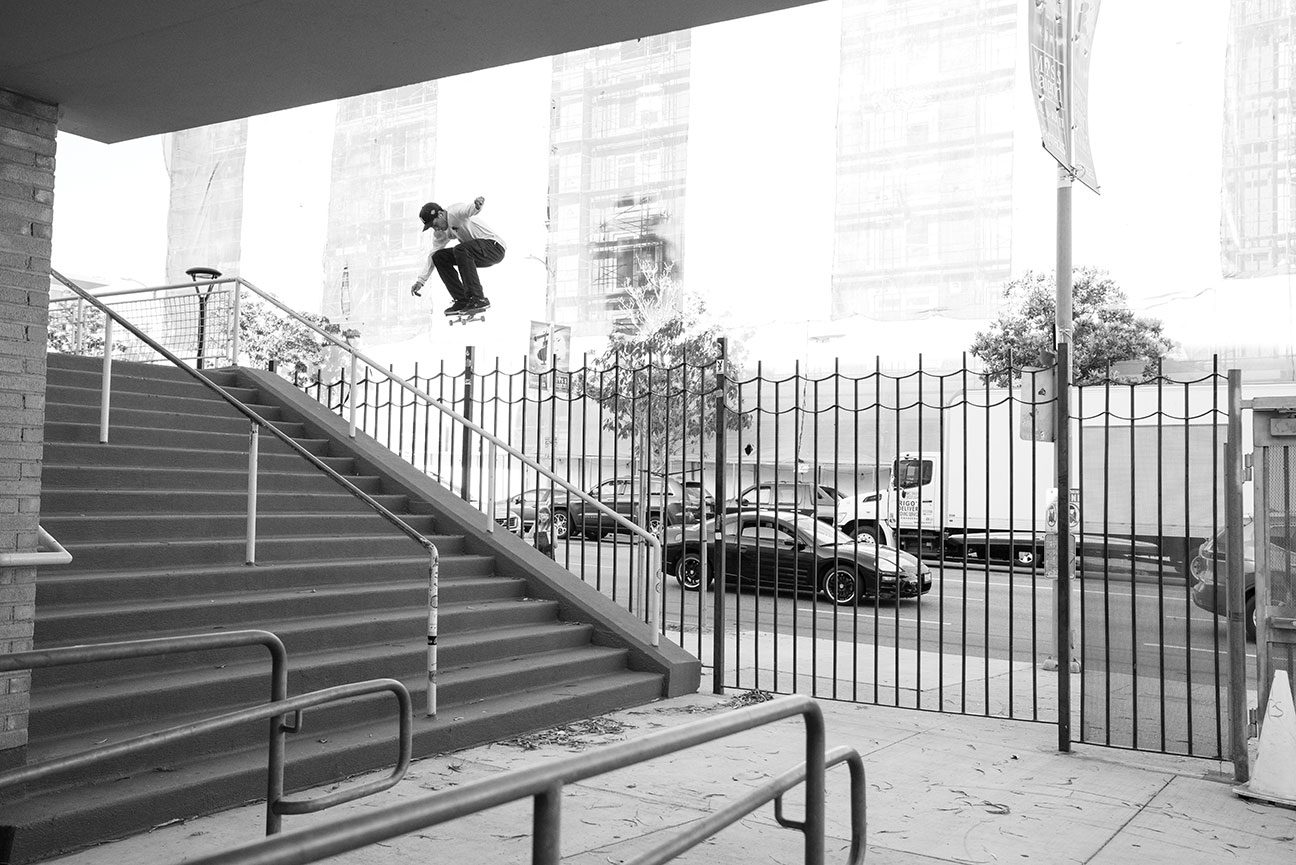 How old are you?

It’s a passion since I was young. I used to play football and then I picked up a board and it felt freeing. No stress. No worries. If I ever have a problem, I can just go skate. I gave up football like a year after and I just wanted to go skate, so that’s all I did. I’ve been doing it for eight years now.

Do you remember when it clicked?

Definitely. I was going into football practice and I was like, “I do not want to be here. I’d rather be out practicing and learning new tricks.” After that, I went home and told my dad, “I don’t want to do football anymore. I just want to skate.” He said, “Okay. Go for it.” Shout out to my dad. He was very supportive. It’s a real blessing that they backed me from the beginning. They bought me boards, trucks, shoes and everything I needed. It was great.

Wow. Where do you come from?

I grew up in the South Bay area, in Carson, PV, Torrance, by the beach and all around.

How did you link up with Powell?

Nigel Alexander was already linked up with them doing business and I was always skating with Nigel every day for years. He told Deville about me and then he was like, “We’re going to go and skate Vans with Deville.” So I went and skated one night and I met Deville the same day and he gave me a Flightdeck and it’s been history ever since.

Sick! Do you have any other sponsors?

Good list. Transitions is dope. I love them. They are amazing people. That’s cool.

Shout out to Buddy and Keisha. That’s family right there. They brought up a lot of people. It’s super dope.

I like a lot of hip hop and R&B. My dad listened to a lot of soul music growing up and I’ve always loved that. I’ve got a little Mexican in me too, so enjoy some Mexican music too. I’ll listen to just about anything. Skating with music is the best.

How do you pick songs for your video parts?

Are you into art and stuff?

Not necessarily, art. I put all of my focus into skating at this point. Me and my homies designed the skatepark for Harbor City. We designed it and built it and got the money for it. That was me and the CA$H crew. That was a lot of years, but it turned out super sick.

“I like the adrenaline rush of skateboarding. That’s what I feed off. Big stuff, big gaps and going fast, that’s what I like.”

I know what it takes. You just have to find one person that you can convince.

Exactly. Imagine ten kids walking into a town council meeting with our skateboards and being like, “We want a skatepark.” They were like, “Whatever.” They were on to the next thing where they could put their money. Luckily, we had a mentor, Mr. Scott. He was our voice that they could understand. They really don’t care what young kids say. They love us now and they want to say, “Oh, we’ve got kids here doing this and that.” I’m like, “You don’t show no love to us when it’s needed.” We did it and they took all the credit.

Do you skate transition a lot too?

Yeah. I try to skate everything. We have a bowl there and some big quarters, so right now I’m just learning everything and I’m trying to get a little more into ledges. I love jumping too. I’ll jump off of anything.

What do you think have been some of your biggest challenges in life?

Success is my biggest fear and it’s something I constantly think about. I’m like, “Am I going to make it? Am I doing this the right way? Am I really supposed to be doing this?” That is my biggest fear and it is also what drives me to work so hard. That’s why I put so much effort into skating, because this is what I want to do for the rest of my life. It’s a constant mind battle. I think fear is fake too though. It’s all in you. It’s man-made. It’s where your mindset is at the end of the day.

That’s a good perspective to have. If you could have any super power, what would it be?

I would like to fly, but being invisible would be pretty sick too. To just be able to pop up on people, that would be stupid. If I had to pick one, it would be flying. If I was a bird for a day, I would not be mad.

What does it mean to you to be on Powell Peralta?

It’s an honor. I didn’t have any big sponsors at the time, so Powell was my first big sponsor. I’ve been on for almost two years now and I’ve come a long way. It’s been a journey and I’m loving every minute of it. We go out and skate every weekend and it’s not like we are just three dudes deep. We are 15 dudes deep, and it’s good to skate with all of the homies. I’m really happy right now.

Nice. Are you in school right now?

I just got into college. I might get into real estate. Deville does that too and he teaches classes on it, which is cool. School and me don’t get along too well, but I gotta be able to provide.

That’s great. What’s been your favorite skate session you’ve had so far?

I think the Hollywood 16. I did an alleyoop back 180 the hard way over the gate. That footage hasn’t dropped yet.

Thank you. The Hollywood 16 was my favorite for sure. I put on one of my favorite t-shirts too. It was a white Powell long sleeve and my nice little hat and I made it happen that day. That was super fun. All the homies were there supporting and there were three filmers. To roll away from something there, at such an iconic spot to skateboarding, that means something.

It’s funny that you bring that up because some people would say, “People have already done shit there.”

That brings me to my next question. How would you describe your style?

Skate fast, jump big. As long as I’m going fast, I like to clear stuff and get over stuff and take the impact. I can’t really skate ledges. I can do it, but it’s not the same excitement. I like the adrenaline rush of skateboarding. That’s what I feed off. Big stuff, big gaps and going fast, that’s what I like.

I can tell. Solid. Where is the furthest you’ve traveled for skateboarding?

Where would you want to go?

I’d like to do an East Coast trip and I’d like to go to Barcelona and Brazil too. I definitely want to go to China too. They have all those banks and marble ledges. It sounds like a dream. I want to go everywhere. I really want to skate New York.

It’s unlimited. We’re going to try to plan a Powell/Juice trip next year and make it happen. We should go to New York.

That would be sick, dude! Definitely.

Do you want to give any shout outs?

What do you want your legacy to be?

I want it to be more than just skateboarding. I would want to be liked and for that to be a big aspect of my life. Going to a skate spot, you leave your name on that spot when you do a trick. Other people come back there and they know it’s been done. I want to hold that and do that at some good spots, so that’s one legacy. Also I want to be known as a down to earth dude and a good guy. A lot of people are negative with bad vibes. I want to show the world something different and positive. The next generation is our biggest focus, so that’s why we’re working on skateparks and stuff like that.

That’s a legacy in its own right.

Skateboarding will help with that. In our community, real skateboarders are some of the most positive.

Tell me about Hearts and Hammers.

I’m sponsored by them too. It’s a supply co set up by Mike Sanchez where we pick up kids all over Long Beach and we travel and skate wherever we want and we make rad hammer gear for all the homies and we drop them hammers. That’s me and all my buddies. That’s love right there. Mike was one of the first to take me out street filming and give me my name in skateboarding. I figured out what I wanted to skate and how I liked to skate through being with them. We would just check out all spots, anywhere we we’d see anything. I was like, “I like skating like this. I like this crazy bump over bar or some crazy double set.” Shout out to Hearts and Hammers. Love you guys. That’s family. Thank you.