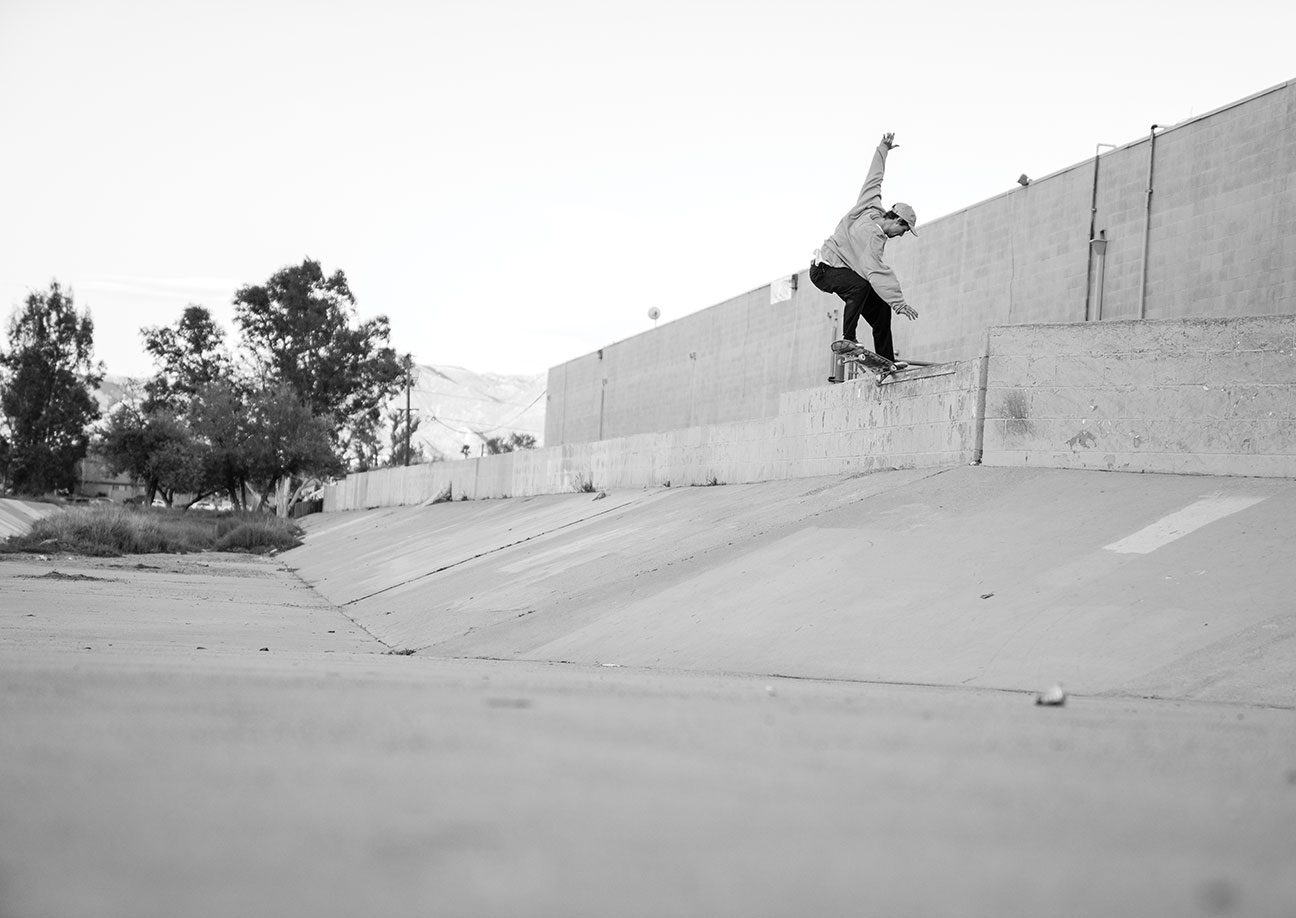 I love it. I can’t stop. I’ve been skating since I was four and I just kept skating.

What did you guys have to skate there? Was it mainly transition or street?

Our main park was mostly transition. The street section was kinda like a joke, so I grew up skating a lot of transition. I actually grew up going to Skatopia a lot in Ohio. It was a four-hour drive, but it was good.

I’ve been to Skatopia. We used to go there for the Bowl Bashes and potato gun wars.

We had to have been there at the same time. I shot a potato gun at this dude on Heckle Hill and it smoked someone’s case of beer and they were heated. They were trying to fight me and I was like 12. They were like, “Oh, I can’t fight you.”

That’s crazy! I was there the year that Dustin Dollin was there with Remy and Volcom and the year before that too.

Did you know Morgan Burgess, the bowl riding kid? That’s who I went with.

Yes! Science and Morgan came out to California and we took them to the Jet Inn and a bunch of spots.

He was a gnarly little kid.

Yeah. He was like the youngest kid to do a McTwist.

He had a mullet too!

“I shot a potato gun at this dude on Heckle Hill and it smoked someone’s case of beer and they were heated. They were trying to fight me and I was like 12. They were like, “Oh, I can’t fight you.”

Yeah. The East Coast scene is tight. When you brought up Heckle Hill, that is pure East Coast. Out here, when you heckle people, they get mad. They don’t know that, if you suck, we won’t even heckle you. If you’re ripping, you’re going to get heckled.

Yeah. You better do it proper.

Did you have winters there too?

Oh yeah. It’s like a frozen tundra from November to early March and then it just goes to rain and humidity. I drove back there a few weeks ago and it was nice weather all the way to Kansas and then it sucked. When we got to Indiana, it was 95% humidity. It was bad. I skated once for 45 minutes. Out here I’ve been skating all day and I’m not even sweating.

The Midwest weather is gnarly. What do you think your biggest challenges were growing up in Indiana and skating?

It’s the seasons for sure. The concrete at spots gets fucked and the grass is growing up and pushing through. It ruins spots that are good.

How long ago did you come out here?

It will be two years ago next month.

I just wanted to skate more. At one point, I almost quit skating and went into the Marines. I was dating the same girl that I’m dating now and she pushed me back into skating.

Did you actually join the Marines?

No. It was a Thursday and I was supposed to sign on a Friday and I just skipped. I passed the physical test and everything and then I was like, “Fuck this.” It was a split decision. I woke up that morning and I was like, “I’m not doing this.”

Yeah. I feel bad for not because I convinced a lot of people that I was going to sign up but then I was like, “Wait. I want to skate still.” My girlfriend got a job at Ernst & Young. It’s an accounting firm and she got put out here so she was like, “Do you want to move to California?” I was like, “Yeah. Immediately.”

Where do you stay out here?

I live in Fountain Valley. It’s pretty much inland from Huntington Beach, a block in.

So you’ve been out here for a few years. How did you get hooked up with Powell?

I knew Dan Corrigan. We’d been skating together since I moved out here and he just called me one day. I was back home visiting for Christmas and I was snowboarding and he was like, “Hey, can you come skate tomorrow?” I said, “Nope. I’m in Indiana right now.” He said, “Okay, give me a call when you get back.” He didn’t really give me a heads up that we were going to be skating with the Powell dudes and then two or three sessions later, Deville was stoked on me, I guess. I liked how it was organic.

Nice. What does it mean to you to ride for Powell now?

It’s really sick. It sparked that want to film a full on heavy part. I was skating for James Kelch and his company Hella Cool and I actually had a board for him. When I came out here I was like, “I’m not a pro skateboarder by any means.” I had to call James and tell him, “I might be pro for you, but I’m not pro out here. I have to restart.” We were cool. It wasn’t like a hateful thing. So that happened and then three or four months passed and I got swooped up by Powell and I like it. I’m doing good and the team feels good.

Yeah. Blacklist Board Shop back in Indiana and this CBD Weed Shop called Motive.

Cool. What kind of music are you into?

I like a lot of different music. I stream everything from grindcore to psychedelic music or beats. It’s usually stuff made with good intention, not stuff just made to be produced.

We skate some pretty gnarly spots so it’s hard to say. Having Deville with us eliminates that fear of being arrested at these spots when we skate at school or skate the roofs. We lose that fear factor and we get to skate these spots that are perfect. We skated the Long Beach sign and it has a big O in the middle. It’s a fullpipe, but it’s only a few feet wide. That was really fun. At that session, it was crazy because a cop pulled up and Deville said, “Do you want to talk to him?” I was like, “No.” [Laughs] You almost feel invincible when you’ve got Deville with you.

Deville is the man. Speaking of being invincible, if you could have any super power, what would it be?

It would be not getting hurt. If I could never break a bone, that would be great. When I was younger, I used to get broke off a lot. I used to race BMX and I’ve broken 25 bones. I broke my right wrist five times and my left wrist four times and I broke my hand, my shoulder, my jaw, my tailbone and my ribs. We get broke off skating too. With biking, you’d hit a jump and you’re clipped in and you didn’t know how much speed you had going, so that alone was live or die.

What is your biggest challenge in life?

It’s convincing myself that I can do something. When I’m skating a rail, half of me is like, “What the fuck are you doing?” The other half of me is like, “You might have it.” I never have that full confidence. I’m always second guessing myself. That’s what I’ve noticed gets me in a lot of trouble. Sometimes I’ll ollie and be like, “Oh, I probably shouldn’t do this.” And then I’ll eat shit. It’s that split moment.

Totally. Are you interested in anything else besides skateboarding?

I wanted to go to school for Graphic Design, but I never pulled the trigger on that. I like to draw and sculpt and stuff. It’s fun.

Are you California for life now?

Yeah. I think so. So is my girlfriend. It’s so nice out here. I will do whatever I can to live out here and be able to skate all year round.

If you could give some advice to a kid from the Midwest or East Coast, what would you tell them?

Those are some realistic issues. I’ve had to tell friends to wait and not move out and be homeless. Save your money and make sure you have a legit plan. I have two friends that mixed up what I said and they were like, “You said it was easy to live out here.” I said, “No! You have to do something with your life out here.” They both came out here on a Greyhound and they were homeless for three months and they tried to blame it on me. I was like, “Dude, that’s not real.” I told you the formula and you ignored me.

That’s sound advice. Don’t just come out here. You gotta have a plan.

Yeah. You gotta have a plan. You have to know what you’re doing.

Do you have any shout outs?

Shout out to my parents, and Deville and all my team riders and my shop owner back at home and everybody that’s smiled and supported me along the way. That’s what it’s all about – having a good time. Thank you.