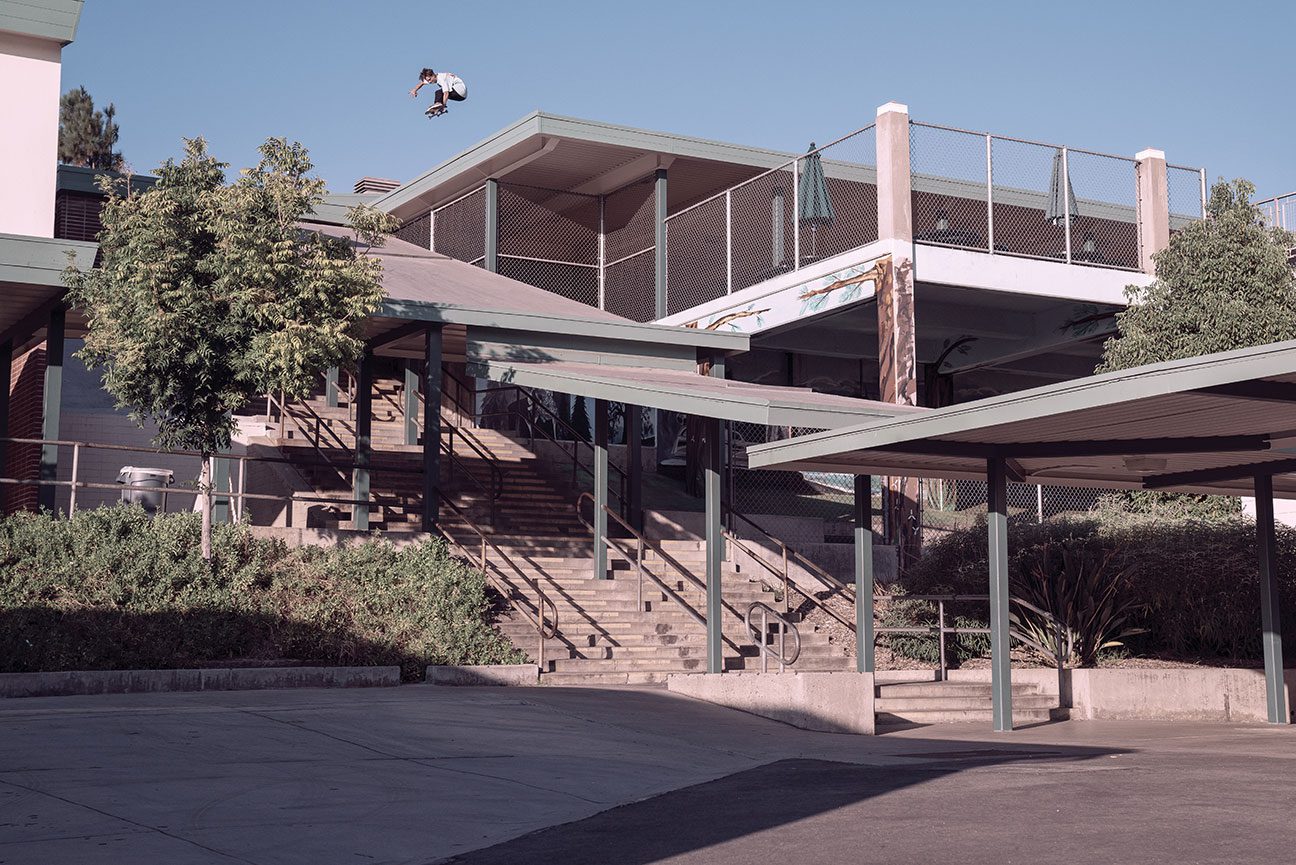 Skateboarding the best thing in the entire world. It’s freedom. When I was growing up, I was kinda forced to play baseball, basketball and soccer, and I just wanted to go skateboarding because it’s the most creative thing. It’s an art form and I love art, so it’s perfect for me. I love skateboarding so much.

What kind of art do you do?

I like to paint and do calligraphy and print making and shading with pencil. Painting is my favorite.

It is a lost art and it’s one of the hardest things. I don’t know why it’s so difficult.

When did you come out to California?

It was about eight months ago.

The weather here is amazing, right?

Yeah. It is amazing. Right now, in Indiana, it’s raining every day and it’s 90 degrees and humid. In a month, it’s going to be snowing.

Everything is a bust there too for skating.

Yeah. In Newburgh, Indiana, which is a subsection of Evansville, it’s illegal to even skateboard on the sidewalk. You get a $25 ticket just for skating.

It’s very different. We just saw a security guard and he told us to leave and we just came down here and sat down a few feet away.

Why did you move to California?

I really want to do this more than anything. This is my only plan. Plan A or bust. I have to do it. This is who I am.

How did you get linked up with Powell?

About five years ago, when I was in Evansville, I had been skating for about two years at that point and Powell came through on their very first Let’s Go Skate tour. I skated as hard as I could and I learned inverts and varials on this ramp that we had. I was just wanting it so bad. At the end of the day, they were like, “We’re going to start flowing you stuff.” Now I’ve been on Powell for five years.

Wow. What does it mean to you to be on Powell?

It’s crazy. To me, it is the molding and the point and the holding block of skateboarding and it always has been. All of the owners of the companies that you see now started off on Powell Peralta. There is Chet Thomas and Tony Hawk and so many people. Those companies wouldn’t be anywhere without Powell having brought those kids up. It’s crazy to think about that. It’s perfect.

Yeah. I’m on Fallen Footwear, Bones Wheels, Bones Bearings, Arcade Belts, OC Ramps and Killer Skate Park and Shop. I love everyone. They’re good to me and they are good friends of mine and I support them all with my whole life.

What is your biggest challenge in life?

I was diagnosed really young with anxiety and depression. For my mom, that was a problem with me coming out here. She didn’t know what would happen if I wasn’t under supervision. It’s really  difficult some days, but being with everyone on the crew really helps. Some days I seem distant, but they are there to support me and it helps me so much. Without them realizing it, they are helping me.

Does skateboarding help you too?

Skateboarding saved me. Without skateboarding, there is no way. For all four years of high school, I just went to the skatepark every single day. I would never go to football games or parties or hang out with friends after school and I wouldn’t change any of that if it meant that I wouldn’t be here now with all of these amazing people.

I think we can all relate as skateboarders. We look at the world differently and it’s that thing of falling and getting up and constant pursuit. I think that helps.

It helps with life. If you get fired from a job, a lot of people think, “What am I going to do? What job am I going to get?” Skateboarders are like, “Okay. I just got fired. What am I going to do now? I’m going to go skate and figure it out.” Skateboarding motivates you in every way. I heard this from a Rodney Mullen TED Talk. Scientists came up to him after his TED Talk and said that, if they had the same mindset as skateboarders, more would get done because after they’ve tried for years on a project and it doesn’t work, most of them don’t try again. Skateboarders will try for years to land one trick in the streets and they won’t stop until they do it. You can’t stop. That’s what makes us completely different humans. It’s the pursuit of a goal. Even if every time you mess up it kills you, when you land that one trick, it’s just euphoria. When you’re skateboarding, you’re skateboarding for yourself. You’re doing what you want to do. You’re dressing the way you want to dress and you’re doing the tricks you want to do. It’s not for anyone. It’s for you. It’s for you to look at and be proud of the artwork that you’ve created.

Here’s an offbeat question. If you could have any super power, what would it be?

I would like to be able to teleport. A lot of people would rather fly, but then you’ve got to fly for a few hours. If I could teleport, I could be in China right now and then I could come right back. Teleporting would be the best. You could go anywhere anytime and be there in less than a second and then come right back. You wouldn’t even have to live and pay the rent in California. You could live in Texas and have the biggest house ever and every morning you could wake up and teleport here and skate here. Can you imagine? Teleporting would be the craziest thing ever. You could say, “I’m going to be in Brazil this Saturday, but I’ll be back by five if you still want to skate.”

Speaking of Brazil, have you been to other countries to skate yet?

No. I haven’t actually. I’d really like to go to Tokyo. I love the urban lights and culture. Dubai looks crazy for skateboarding too with all of the marble everywhere. They aren’t mad about skateboarders either. They had the We are Blood people come there and skate. They were like, “Come skate our city.”

They consider it art.

It is art. That’s what people should consider it. Skateboarding is an art form. Other sports can be art forms, but skateboarding is 100% creativity and your motivation and your drive and we don’t have boundaries on who is allowed to skateboard.

Music is important to skateboarding.

Music and skateboarding align in my eyes because you can have an amazing video part that shows your art and it’s the way that you want it to be and the tricks you wanted and then the song in the video part goes along with who you are and with your skateboarding. It’s like an orchestra of art. It’s an entire masterpiece of who you are.

Are you working on a video now?

I have a lot of things coming out actually. I have a Berrics part and Welcome To Fallen is coming really soon and then I have an i Dabble segment and then at the beginning of next year, I have a Thrasher part.

You’re doing it. That’s great! Do you want to give any shout outs?

Shout out to the best person, my mom. I love my mom more than anything. Shout out to Deville. Shout out to my girlfriend, Julia. She’s really amazing. Shout out to Fallen Footwear, to Will O and Dax, and my homie and filmer, Lando, Steven, Cody and all of my friends that we are skating with today. We got Robbie, Cole, Dale, Deville, Zach, Spencer and Craig. I could keep going. Shout out to Powell Peralta and Juice Magazine.

My message is to love who you are. People might make fun of how you dress or what tricks you do, but it doesn’t matter. In skateboarding, it’s you. It’s your art and it’s who you want to be. We own being ourselves and it’s the best thing ever. The world would be a much better place if people just embraced who they are.