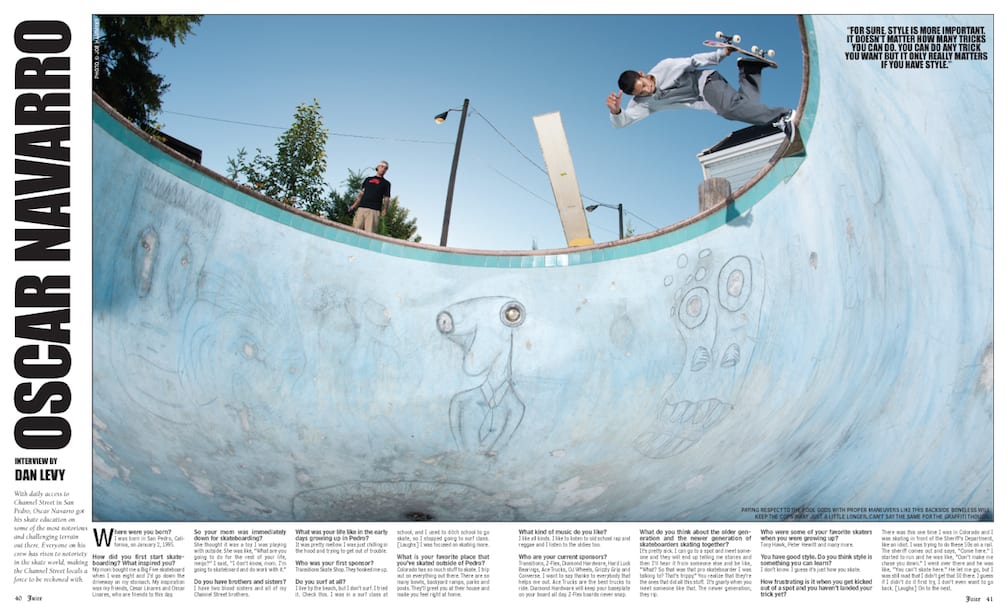 With daily access to Channel Street in San Pedro, Oscar Navarro got his skate education on some of the most notorious and challenging terrain out there. Everyone on his crew has risen to notoriety in the skate world, making the Channel Street locals a force to be reckoned with.

How did you first start skateboarding? What inspired you?
My mom bought me a Big Five skateboard when I was eight and I’d go down the driveway on my stomach. My inspiration was my friends, Cesar Linares and Oscar Linares, who are friends to this day.

So your mom was immediately down for skateboarding?
She thought it was a toy I was playing with outside. She was like, “What are you going to do for the rest of your life, meijo?” I said, “I don’t know, mom. I’m going to skateboard and do work with it.”

Do you have brothers and sisters?
I have two blood sisters and all of my Channel Street brothers.

What was your life like in the early days growing up in Pedro?
It was pretty mellow. I was just chilling in the hood and trying to get out of trouble.

Who was your first sponsor?
Transitions Skate Shop. They hooked me up.

Do you surf at all?
I live by the beach, but I don’t surf. I tried it. Check this. I was in a surf class at school, and I used to ditch school to go skate, so I stopped going to surf class. [Laughs] I was focused on skating more.

What is your favorite place that you’ve skated outside of Pedro?
Colorado has so much stuff to skate. I trip out on everything out there. There are so many bowls, backyard ramps, parks and pools. They’ll greet you at their house and make you feel right at home.

What kind of music do you like?
I like all kinds. I like to listen to old school rap and reggae and I listen to the oldies too.

Who are your current sponsors?
Transitions, Z-Flex, Diamond Hardware, Hard Luck Bearings, Ace Trucks, OJ Wheels, Grizzly Grip and Converse. I want to say thanks to everybody that helps me out. Ace Trucks are the best trucks to ride. Diamond Hardware will keep your baseplate on your board all day. Z-Flex boards never snap.

What do you think about the older generation and the newer generation of skateboarders skating together?
It’s pretty sick. I can go to a spot and meet someone and they will end up telling me stories and then I’ll hear it from someone else and be like, “What? So that was that pro skateboarder I was talking to? That’s trippy.” You realize that they’re the ones that did all this stuff. It’s gnarly when you meet someone like that. The newer generation, they rip.

Who were some of your favorite skaters when you were growing up?
Tony Hawk, Peter Hewitt and many more.

You have good style. Do you think style is something you can learn?
I don’t know. I guess it’s just how you skate.

How frustrating is it when you get kicked out of a spot and you haven’t landed your trick yet?
There was this one time I was in Colorado and I was skating in front of the Sheriff’s Department, like an idiot. I was trying to do these 50s on a rail. The sheriff comes out and says, “Come here.” I started to run and he was like, “Don’t make me chase you down.” I went over there and he was like, “You can’t skate here.” He let me go, but I was still mad that I didn’t get that 50 there. I guess if I didn’t do it first try, I don’t even want to go back. [Laughs] On to the next.

What else do you like to do besides skateboarding?
I like playing sports and chillin’ and barbecue-ing with my homies. I like watching football. We play baseball under the bridge. We call it stickball. We get a game of football going sometimes too.

What size board are you riding?
Right now I’m riding an 8.5 with some OJ 53 wheels. I’ve got Ace 44s and Hard Luck bearings.

I thought you’d be riding some bigger wheels, but your board flips easier with smaller wheels.
Yeah. I like skating street too and I try and get tricks on the tranny.

What do you think is more important, style or tricks?
For sure, style is more important. It doesn’t matter how many tricks you can do. You can do any trick you want but it only really matters if you have style.

Do you listen to music when you skate?
Yeah. We bump at Channel.

Did you help with any of the building at Channel Street?
I helped dig up dirt for the new bowl and I hauled in some pool coping. They had me digging dirt and sweeping and taking out the trash. When I’d ask if I could help, Robbie O’Connell would say, “Pick up trash or something.”

That place is insane.
I’m hyped that’s my home park.

Have you ever gone out of the country to skate?
I’ve gone to Canada, to Montreal. I went to Mexico to see my family too.

Are your parents pretty supportive of your skateboarding?
Oh yeah. They see me going around places, but they still try to hype me up to do some different stuff. I take their advice. I go and help my friends and look for jobs. They pump me up on that.

Do you bomb a lot of hills in Pedro?
Yeah. Me and my friends will get our cruiser boards and catch a bus to the top of the hill and go down and then catch the bus again to go another round.

Who is in your skate crew now?
I skate a lot with Ronnie Sandoval, Robbie Russo, Rick Fabro, Malakai, Liam, Rayce, Gary Bolos, Cesar Remoldi and Riley Stevens. Joe Hammeke is shredding too. He got second in the masters division at the Union Hills Classic.

That was a good answer. If you wanted to give advice to a young kid that wanted to become a professional skateboarder, what is the first thing you’d say to them?
Do what you want. If they want to skate, they’re going to want to skate. If they want to play baseball, they’re going to want to play baseball and join the baseball league. If a kid really wants to do it, they just have to do it. You can tell how much they want it by seeing how much they try. All I can say is do what you want if you really want to do it.

Describe the feeling of landing a trick that you’re totally stoked on.
Sometimes, if I just go with the flow, I just land tricks and end up doing tricks back to back. That’s the best feeling when you try to go for different tricks in one line. It’s sick if you land something that you weren’t even trying and didn’t even know what you were doing.

Who is doing the best lately that you’ve been skating with?
Ronnie Sandoval has been killing it. He’s got sick inverts.

You, Ronnie and Robby just came out of Pedro swinging. It’s the training ground.
Yeah. It’s insane to think about it like that. A normal day is just watching my friends shred like that, so it keeps me hyped.

Do your sponsors ever put any pressure on you to compete in contests?
No. I do my best to represent though.

What is your favorite terrain to skate?
I pretty much skate skateparks almost all day and then I hit the streets a little bit. Skateparks are a sure deal and DIY stuff. That’s the fun stuff to skate. I like spots built to skate.

So you’re in Arizona right now rolling around at a ditch.
Yeah. I got invited out here. It’s sick. We’ve been skating all kinds of good spots. I’m stoked to be here. We’re going to go to a school and hang out with some kids and show them how to skate and have them try and launch off a launch ramp. It’s fun. I did it before at the Boys and Girls Club. All the kids wanted my skateboard and it was hard not to give it to them.

So you’re inspiring the next generation of skateboarders. That’s got to be a pretty rad feeling.
Yeah. It’s pretty tight. I don’t know if I’m inspiring them, but it’s pretty sick. I just tell them that I skateboard every day. They’re like, “I want to skateboard, but I don’t even know how to push.” I’ll say, “Try it.” You can tell when you watch the kids skate and you just know, “That kid really wants to skate.” That’s the best part.

So you got your first grind in front of all your skate heroes. Were you trying to play it cool like you’d done it before?
I was trying to carve that shit. I wanted to frontside grind. I felt like I was in the way because they were shredding. I was just watching the sick shit go down. That was maybe when I was 13.

If you were to put together a dream session of dudes to skate with, who would be on your list?
I was at a session at the Bible Bowl with Christian Hosoi and that was pretty sick. That was the session for Jay Adam’s board release. Christian Hosoi is one of my favorite people to see skate. He rips.

Did you ever get to skate with Jay?
No. I never did. I saw him at Channel before, but I never met him. I’m sorry for his passing. I was hyped on him. I grew up watching Lords of Dogtown.

Have you ever skated with Tony Hawk?
Actually, I did. He came to skate Channel one time.

You probably skated with Daewon a lot.
Oh yeah. Daewon is a for sure inspiration to me. Skating with him is mind blowing. There was one point where he was down at Channel Street for three months at 8:30 every morning. He’s so gnarly. I’m stoked on him for sure. He taught me a lot of tricks and we played a lot of games of SKATE.

Well, I’ve been seeing you skate for a while. In the last couple of years, you have come up. You went from little kid to man-style really fast, so I’m really hyped on how good you got. It’s sick.
Thank you.

Is there anyone that you want to thank?
I want to thank my mom, my dad, my sisters, my friends and Channel Street for being there when I didn’t have anywhere else to go. Thanks to Robbie O’Connell, Andy Harris, Yamo and Bill Sargent for teaching me how to skate. Thanks to Robbie Russo, Ronnie Sandoval, Buddy, Keisha, Derreck, Cesar and Selena for helping me out through tough times. Thanks to all my sponsors for keeping me going.

Is there anything you want to say to the people of the world, the Oscar Navarro knowledge drop?
Keep your head up.

FOR THE REST OF THE STORY, ORDER ISSUE #73 AT THE JUICE SHOP…