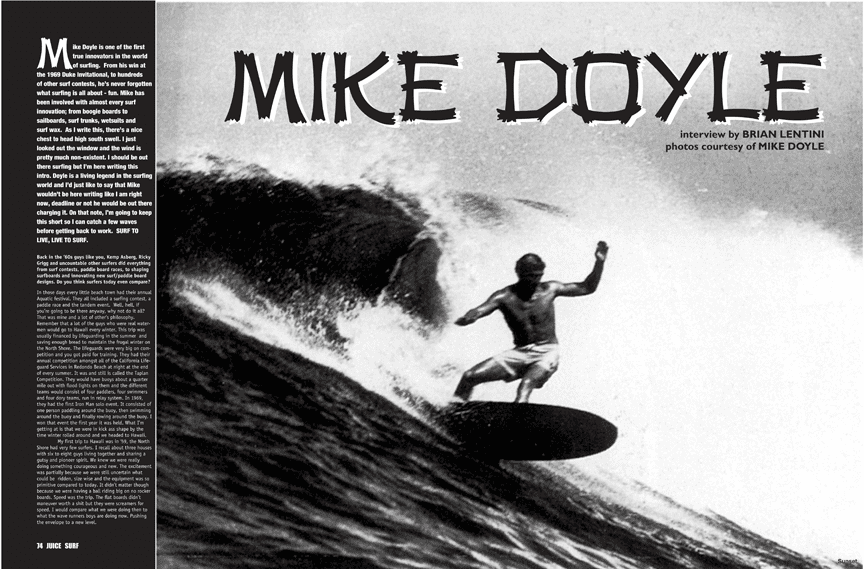 Mike Doyle is one of the first true innovators in the world of surfing. From his win at the 1969 Duke Invitational, to hundreds of other surf contests, he’s never forgotten what surfing is all about – fun. Mike has been involved with almost every surf innovation; from boogie boards to sailboards, surf trunks, wetsuits and surf wax. As I write this, there’s a nice chest to head high south swell. I just looked out the window and the wind is pretty much non-existent. I should be out there surfing but I’m here writing this intro. Doyle is a living legend in the surfing world and I’d just like to say that Mike wouldn’t be here writing like I am right now, deadline or not he would be out there charging it. On that note, I’m going to keep this short so I can catch a few waves before getting back to work. SURF TO LIVE, LIVE TO SURF.

Back in the ’60s, guys like you, Kemp Aaberg, Ricky Grigg and uncountable other surfers did everything from surf contests, paddle board races, to shaping surfboards and innovating new surf/paddle board designs. Do you think surfers today even compare?
In those days every little beach town had their annual Aquatic festival. They all included a surfing contest, a paddle race and the tandem event. Well, hell, if you’re going to be there anyway, why not do it all? That was mine and a lot of others’ philosophy. Remember that a lot of the guys who were real watermen would go to Hawaii every winter. This trip was usually financed by lifeguarding in the summer and saving enough bread to maintain the frugal winter on the North Shore. The lifeguards were very big on competition and you got paid for training. They had their annual competition amongst all of the California Lifeguard Services in Redondo Beach at night at the end of every summer. It was and still is called the Taplan Competition. They would have buoys about a quarter mile out with flood lights on them and the different teams would consist of four paddlers, four swimmers and four dory teams, run in relay system. In 1969, they had the first Iron Man solo event. It consisted of one person paddling around the buoy, then swimming around the buoy and finally rowing around the buoy. I won that event the first year it was held. What I’m getting at is that we were in kick ass shape by the time winter rolled around and we headed to Hawaii. My first trip to Hawaii was in ’59, the North Shore had very few surfers. I recall about three houses with six to eight guys living together and sharing a gutsy and pioneer spirit. We knew we were really doing something courageous and new. The excitement was partially because we were still uncertain what could be ridden, size wise and the equipment was so primitive compared to today. It didn’t matter though because we were having a ball riding big on no rocker boards. Speed was the trip. The flat boards didn’t maneuver worth a shit but they were screamers for speed. I would compare what we were doing then to what the wave runners boys are doing now. Pushing the envelope to a new level.

Cars seemed to be a huge part of a surfer’s lifestyle back in the ’60s and you were notorious for having so many cars that the government got suspicious. Explain this…
I used to come to Santa Cruz a lot in the ’60s; my friends were Doug Haut and Rich Novak. I liked the laid back and natural beauty of the area. Also, there weren’t many surfers, no colleges yet and the town was all old people. It was a great backdrop for the crazy and wild surfers. No one could really relate, so we were free to let it all hang out. Jack O’Neill offered me a job to move up there and help him with the wet suit business which was at the base of the pier in a 15ft. by 20ft. building. I declined because I was heading to Hawaii. There were so many old people dying off that every gas station had a couple of perfect cars for sale; ’38 Buick coup, ’39 Buick with dual side tire mounts in front of the front fenders. Perfect cars that were maintained perfectly. I think $300 was the most I ever paid. I did about twelve of these Santa Cruz car runs and then I would sell them in L.A. for triple what I paid. I also went to Burligame and started to buy used hearses and ambulances at $300 a pop. Finally the government got wise and said I had to get a dealer’s license to sell any more cars. I didn’t buy any Woodies because the Santa Cruz weather wasn’t friendly to the wood.

“I used to come to Santa Cruz a lot in the ’60s; my friends were Doug Haut and Rich Novak. I liked the laid back and natural beauty of the area. Also, there weren’t many surfers, no colleges yet and the town was all old people. It was a great backdrop for the crazy and wild surfers. No one could really relate, so we were free to let it all hang out.”

I was recently at the Woody Exhibit at The Peterson Museum in L.A. and I read that the reason Woodys are so sought after and valuable today is because most were ruined by surfers of the ’60s. There were stories of surfers ripping the wood paneling off for beach bonfires. And on the other hand they were nicknamed ‘daddy’s little nightmare’ because they were afraid their daughter would end up in the back with some unruly surfer. Do you have any Woody stories that would make a Woody enthusiast of today cringe or a father of a teenage daughter sweat profusely??
Woodys were a great buy then because the wood would rot and the car would look like someone with a big cavity in their front teeth. So, the resale was nil but the cars ran great and they were good for hauling longboards and they doubled for a place to sleep. That’s why they became the logo of the surfer. Cheap and practical. Boy, you should have seen the faces of the parents of the girls we took out when we pulled up to their house with a rotten wood-paneled Woody with a bed in the back!

What was your favorite car?
I had one old beater. I paid $35 for it. John Severson helped me paint it and then christened it ‘The Trestle Special’. Rick Griffin did the whole dash with little furry monsters cooking some guy in a pot.

FOR THE REST OF THE STORY, ORDER ISSUE #50 BY CLICKING HERE…