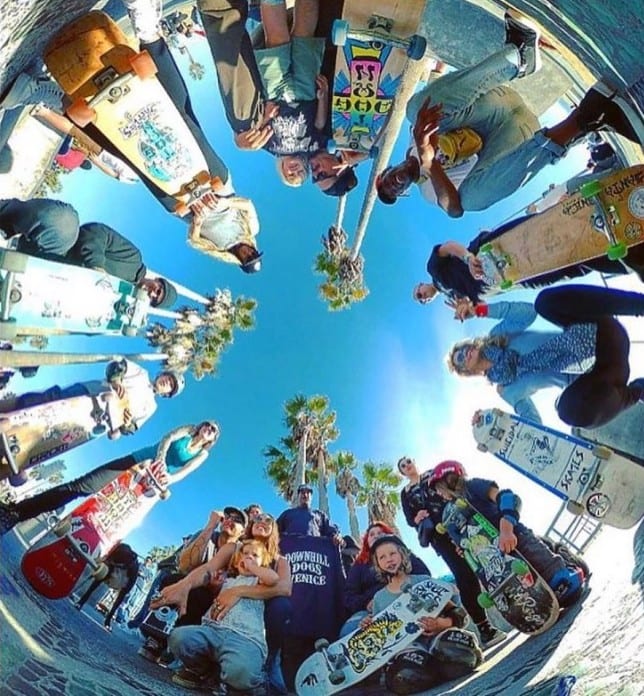 Dan Levy says, “The Mi Sphere 360 is a camera with two lenses on it that shoots 180 degrees on both sides and it is one of the most revolutionary cameras I’ve ever worked with. It shoots full perspective 360, so you can shoot it in different modes like tiny planet, mirror ball, crystal ball, flat, pano and virtual reality mode. You can also shoot time-lapse clips and slow motions clips.

The Mi Sphere 360 camera is really small and compact, so you can literally keep it in your pocket in the cool case that comes with it. It also comes with a selfie stick, which doubles as a tripod. It’s really easy to use and it’s really fun to use. It opens up a new dimension to creative ways to shoot video and photos with new and unique perspectives.”

Jeff Ho says, “The Mi Sphere 360 camera has a lens on both sides so you can get the whole room in the shot. You can get shots from the floor up for from the sky down, or you can hold it and get a panoramic 360 view of everything around you. It’s really lightweight and portable, so you can take it with you anywhere, and it’s really easy to operate. It’s awesome.”

Dan explained, “I skated down the Venice Beach boardwalk with it and we shot photos and video at the Venice Mardi Gras parade recently and it opens up a whole dimension to getting creative with a camera.

We shot with Chuck D from Public Enemy and Prophets of Rage at his first solo art show “Behind The Seen” and we shot 360 photos and video of the whole gallery with Jeff and Chuck D in it and it was cool. You get to feel like you’re there, no matter where you are or what you’re shooting. You get to see 360, so it’s like if you had eyes in the back of your head. It’s awesome.  We’ve had so much fun with this camera already, and we’re going to do so much more. It’s water resistant, so you can get near the ocean and you can take it out in the snow and the rain. It’s just a really good time. We highly recommend getting this camera. It’s really fun.”

The editing capabilities within the Mi Sphere Camera app open up a whole new world to what you can do with your Mi Sphere 360 clips and photos. The Mi Sphere Camera app offers a full range of options for tethering to your phone and shooting photos and recording video without having to be in the images or clips. You can be up to 50 meters away from the camera and operate the camera from your phone. You can edit your photos and clips in the app, as well as set up a timer for shooting group shots.

The app includes multiple filters to have fun with including “fleet”, which has a sepia tone feel, and “youth”, which has a vibrant tone, and “toon”, which gives you an animation style shot and “sketch”, which turns your photos and video into a drawing with sketch effects. You can also take screen shots from your photos and video clips if you see a cool angle or perspective that you want to share on social media.

The Mi Sphere 360 also has a built-in phone gyroscope to bring stability and different exciting viewpoints to your photos and clips. You can also preset the video recording for short 10 second videos or determine the time length in the presets or you can film for as long as your memory card will hold. For example, if you have a 16GB memory card, you would be able to record for 50 minutes!

You can record a 2k sports event video at 60 frames per second, or a 4k HD video at 30 frames per second, and adjust ISO, exposure and white balance to record a video in low light. You can take this camera anywhere and it’s great for filming day or night, as well as in the sun and snow, rain or shine.

Xiaomi was founded in 2010 by serial entrepreneur, Lei Jun, who believes that high-quality technology doesn’t need to cost a fortune. Xiaomi creates remarkable hardware, software and internet services for and with the help of its Mi fans.