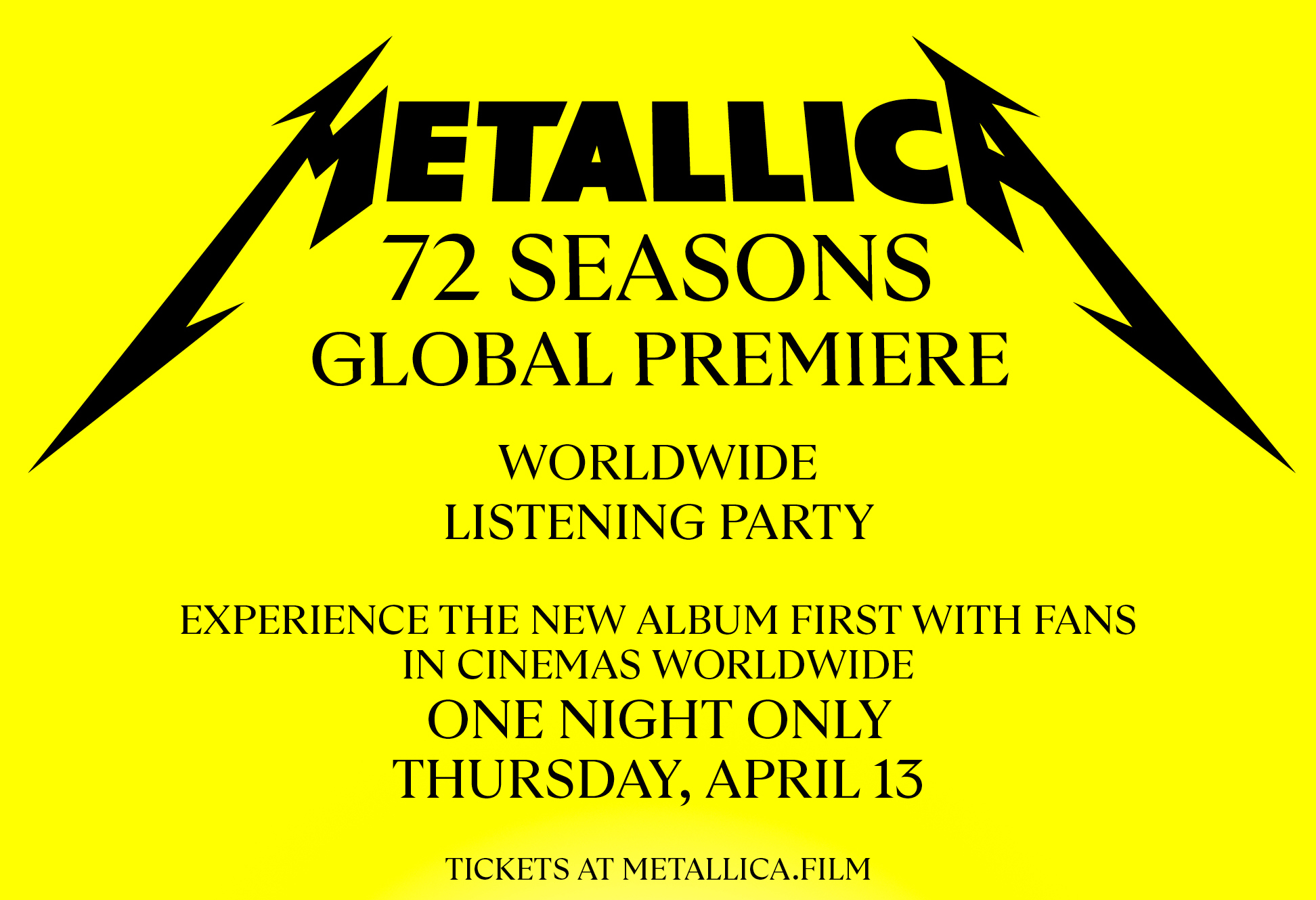 Check out new videos from Metallica including “Screaming Suicide” and “Lux Æterna” from the new Metallica album 72 Seasons, and get ready for the album’s global premiere worldwide listening party on April 13, 2023 with the album’s release the following day, April 14, 2023.

Metallica and Trafalgar Releasing are excited to extend an open invitation to a worldwide listening party: the global premiere of Metallica’s forthcoming 12th studio album, 72 Seasons. For one night only on Thursday, April 13, 72 Seasons will be played in full in pummeling surround sound, exclusively for cinema audiences worldwide—with every one of the new songs featuring its own music video and exclusive commentary from the band. The result will offer fans an unforgettable night as they experience 72 Seasons first and fully on the eve of its April 14 release date. View a Metallica: 72 Seasons – Global Premiere announcement video from Metallica HERE.

Preceded by the newly released album track “Screaming Suicide”  and its brand-new lyric video, and first single “Lux Æterna” — hailed upon its November 28, 2022 release as “thundering, breakneck” (Billboard), “gut-punching” (Rolling Stone) and “blistering” (USA Today) — 72 Seasons will be released April 14 via Metallica’s own Blackened Recordings. Produced by Greg Fidelman with James Hetfield and Lars Ulrich, and clocking in at over 77 minutes, the 12-track 72 Seasons is Metallica’s first full length collection of new material since 2016’s Hardwired…To Self-Destruct. The album will be released in formats including 2LP 140g black vinyl and limited-edition variants, CD and digital—for a full listing of configurations, pre-orders and further information, go to https://www.metallica.com/store/72-seasons/.

“This is a monumental opportunity for Metallica fans to be the first to hear the new album. We are thrilled to be a part of this historical global moment—connecting Metallica with their fans once again,” said Kymberli Frueh, SVP Programming and Content Acquisitions, Trafalgar Releasing.

Formed in 1981 by vocalist/guitarist James Hetfield and drummer Lars Ulrich, Metallica has become one of the most influential and successful rock bands in history, selling nearly 120 million albums worldwide and generating more than 15 billion streams while playing to millions of fans on all seven continents. Metallica’s catalog of multi-platinum studio albums includes Kill ‘Em All, Ride the Lightning, Master of Puppets, … And Justice for All, Metallica (commonly referred to as The Black Album), Load, Reload, St. Anger, Death Magnetic, Hardwired…to Self-Destruct, and the forthcoming 72 Seasons, out April 14, 2023, on the band’s own Blackened Recordings label. Metallica’s awards and accolades include nine Grammy Awards, two American Music Awards, multiple MTV Video Music Awards, a 2009 induction into the Rock & Roll Hall of Fame, and Sweden’s Polar Music Prize. In 2017, Metallica established the All Within My Hands Foundation to give back to communities that have supported the band. To date, All Within My Hands’ collective efforts have raised nearly $12 million – providing $5.9 million in grants to career and technical education programs, over $2.5 million to combat food insecurity, and more than $3.3 million to disaster relief efforts.

Trafalgar Releasing, the global leader in event cinema distribution, harnesses the power of cinema to bring fans together in more than 13,000 locations in 132 countries worldwide.  A subsidiary of Trafalgar Entertainment, Trafalgar Releasing’s worldwide operations include production, acquisition, marketing, and distribution of live or pre-recorded content to cinemas led by an international team of specialists. Featuring live concerts, music documentaries, world-class opera, award-winning theatre, and more from the leading names in entertainment such as BTS, Metallica, Oasis, Coldplay, Billy Joel, George Michael, Twenty One Pilots, the Royal Opera House and more, Trafalgar Releasing has shattered event cinema box office records, most recently with the BTS Permission to Dance on Stage – Seoul: Live Viewing concert which grossed more than $32.6M at the global box office. More information about Trafalgar Releasing can be found at www.trafalgar-releasing.com.