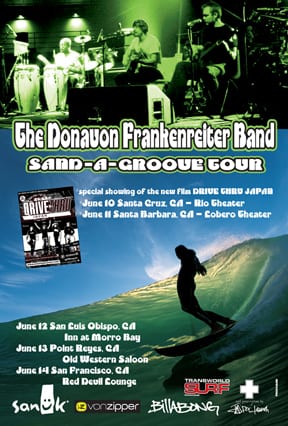 LINCOLN CITY SKATEPARK – Lincoln City added to their skate park. I believe they have re-earned their title, Gnarliest Skatepark in America 2003. http://www.SkateOregon.com

PLACERVILLE PARK – New Placerville park is located at the El Dorado Fairgrounds and will open on the weekend of June 12-15th with the County Fair. It should be a zoo. The guys running the park for the community are from Mountain-Surf shop in town. This park is way bigger then the Cameron Park area. Looks to be a better flow then other parks too. The park was desinged somewhat on the fly as changes were made as the building went on by the skate crew doing the design and building. [M. Chantry]

VANS SKATE TEAM EMBARKS ON FIRST-EVER INTERNATIONAL SKATE TOUR Rowley, Caballero, Trujillo, Greco and Cohorts Rip through West Coast June 13-24 and East Coast in Mid-August. The Vans skateboard team, featuring the world’s best street skaters including Geoff Rowley, Steve Caballero, Tony Trujillo and Jim Greco, is currently tearing through Europe and hits the States for a West Coast swing June 13 through June 24 before resuming in the East Coast August 15 through August 27. Vans’ Pleased to Meet You skateboard tour is the most ambitious skate trek put together in Vans’ 37-year history with more than 15 riders taking part and the team hitting more than 35 cities in eight countries. visit www.skate.vans.com for more info

V.S.A. NEWS – The Venice Surf and Skateboard Association is pleased to announce that the VSA will be participating in the Venice Carnival on June 14th and the Abbott Kinney festival on Sept 28th. The event on June the 14th will take place at Windward Plaza in the heart of Venice, Ca. This event will be for skateboard demonstrations only. The VSA will set up a street style course. Teams will be invited to participate. The Sept 28th event will be a Pro/Am street style competition. Skater divisions will include :Team, sponsored am, unsponsered am and pro. A cash purse of $500.00 will be offered in the pro/am division. The VSA is a non-profit organization. Contributions are tax deductible(501c). All precedes go to youth programming (skateboard contests,skate trips, job training etc.) Sponsorship is very affordable. One event $150. Two events: $250. The VSA values your interest and participation. Thank you Ger-I Lewis – Venice Skateboard Association. For more information e-mail – venicesurfsk8@yahoo.com

X GAMES – Bucky Lasek goes gold at the X Games Global Championship Crowd with a #1 Finish – Carlsbad, CA – May 19, 2003 – In typical Lasek style, Bucky took Gold at the Skateboard Vert competition Saturday night at the X Games Global Championship, held at The Alamodome in San Antonio, TX. His second run earned a 94.0, and was highlighted by impressive tricks and big frontside airs. Lasek can be seen next at ESPN X Games IX, 2003 held this year in Los Angeles and aired August 16-21, 2003 on ESPN, ESPN 2 and ABC Sports.

STOP THE FCC – ”On June 2, the Federal Communications Commission is planning on authorizing sweeping changes to the American news media. The rules change could allow your local TV stations, newspaper, radio stations, and cable provider to all be owned by one company. NBC, ABC, CBS and Fox could have the same corporate parent. The resulting concentration of ownership could be deeply destructive to our democracy. Congress is supposed to guard against monopoly power. But the upcoming rule change could change the landscape for all media and usher in an era in which a few corporations control your access to news and entertainment. Please join me in asking Congress and the FCC to support a diverse, competitive media landscape by going to: http://www.moveon.org/stopthefcc/ You can also automatically have your comments publicly filed at the FCC. When the folks at MoveOn.org talk to Congresspeople about this issue, the response is usually the same: We only hear from media lobbyists on this. It seems like my constituents aren’t very concerned with this issue. A few thousand emails could permanently change that perception. Please join this critical campaign, and let Congress know you care.

DEKLINE TO LAUNCH AT ASR SEPT 2003 (San Diego, CA) – Tum Yeto, Inc., home to successful brands Toy Machine, Foundation, Pig Wheels, Hollywood, Deathbox and Ruckus, announces the launch of its latest brand, Dekline. After more than a year of development, Dekline will debut its premiere line in September at ASR San Diego. Their comprehensive line of footwear, apparel and accessories will land at select core retailers for Spring 2004.

ROBB HAVASSY – The city of Chula Vista, is proud to present an exhibition of art by California painter Robb Havassy. The exhibition, A California Fairytale will present 60 of Havassy’s paintings and limited editions and will be open to the public from June 3 – July 1, 2003 at the Rosemary Lane Galeria, located within the newly constructed South Chula Vista Library. 389 Orange Ave., San Diego CA (619) 585-5755 (call for info/directions) or go to www.havassyart.com

SURFING ADDED TO X GAMES X – Competition to be held in Surf City USA – Huntington Beach – on August 9. ESPN’s X Games, the definitive action sports event, has added Surfing to its competition lineup, beginning with X Games IX in Los Angeles this August. The Surfing competition will be held August 9 at Huntington Beach, also known as Surf City USA. X Games IX will be the first major competition to embrace the National Surf League’s (NSL) The Game format, a new competition that features two eight-surfer teams. The ninth annual X Games in Los Angeles will showcase more than 300 of the world’s best action sports athletes competing in a variety of sports categories for medals and prize money from August 14-17. STAPLES Center will serve as the primary venue for the X Games, and will host competitions in Bike Stunt, Moto X, Skateboard and Aggressive In-line Skate. The Moto X Freestyle event will be held at the Los Angeles Coliseum at night under the lights on August 16. Competitions taking place the week prior will include Surfing at Huntington Beach and Wakeboard, Skateboard Street and Downhill BMX at locations to be announced soon. More than 20 hours of X Games IX original programming will be featured on ESPN, ESPN2 and ABC August 16-22. The two Surf teams at X Games will be created to play off the time-honored rivalry between America’s east coast and west coast surfers. Each team will also include two wild cards, which will allow the teams to add surfers from other parts of the world. The National Surf League will serve as the sport organizer for Surfing in the X Games. The format: -Two eight-surfer teams compete in four quarters with each quarter broken off into two twenty-minute heats. -Each heat is surfed as a team. Four surfers from one team go out for the first twenty-minute heat, and then four surfers from the other team go out for the quarter’s second twenty-minute heat. -Surfers keep their top two wave scores. All athletes’ best two scores are added together for a team score. -Each team is allotted three time outs per half, usually taken during lulls in wave sets or while team riders are paddling out to the break. -Team coaches determine which foursome’s will head out – based on match-ups, surf conditions, rider’s strengths, etc. Never before has there been a surf contest that encouraged teamwork, Gerlach said. The Game is designed to bring the excitement and spectator-friendly nature of mainstream sports to surfing. We are excited to work collectively with ESPN in creating a hugely successful GAME to kick off our 2004 NSL Game Series and to be the unparalleled surf format for X Games. The Game was founded by pro surfer and co-founder of National Surf League (NSL) Brad Gerlach as a revolutionary surfing competition format. The NSL’s objective is to develop a revolutionary surfing format that is dedicated to the pursuit of surfing excellence, building awareness for the sport and creating a fun, competitive landscape for all types of surfers.

SANTA FE SPRINGS, CA – Vans is running away from its skatepark business, officials said. The company, which sells shoes, clothing, helmets and other action sports products, suffered heavy losses last year. Many of the losses stem from the 10 skateparks it operates across the country. In its third quarter, Vans reported $9.2 million loss on $82 million in sales. Included in the loss was a $15.3 million charge to write down assets from its skateparks and 17 of its retail stores. According to officials, the company is negotiating with property owners to either close its skateparks or reduce rents. Gary Shoenfeld, the company’s chief executive officer, said competition from free, city-owned parks cut into company’s revenue. As far as for-profit skateparks, we want to get out of that business, he said. Many BMX riders have criticized Vans parks because some prohibit bikes and other allow them only during limited hours. Officials said they have yet to decide which parks it will close.
BART SARIC SKATEBOARDS 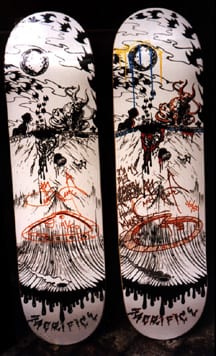 SACRIFICE SKATEBOARDS – Bart Saric has a limited edition signed and numbered B/W full board graphic on Sacrifice. It’s called the ‘dead pool’. There were only 50 made with a different pool shape signature on each one for info 310-455-2403. Also check out his new sticker design for Sacrifice Skates.

NORTHWEST FILM – Northwest Film Premiere Tour – April 29, 2003 – Northwest is a new film by Coan Buddy Nichols and Rick Charnoski. Like their other films, Fruit Of The Vine , Skateparks Of Oregon and Tobbacoland , this real-life road movie uniquely showcases great skateboarding in all its varieties–not to mention the perils and joys of the road and the spontaneous fun that makes life worth living. Focusing their super-8 lenses on hand-sculpted concrete skateparks and the skaters who build and ride them, Nichols and Charnoski capture some of the rawest skateboarding you’ve ever seen in the peaceful and beautiful setting of the Pacific Northwest–all while visiting old friends and making new ones. Rick and Buddy have traveled all over the world documenting the underground aspect of skating through films, stories and photographs. Appropriately, Emerica Footwear is sponsoring Northwest , which takes the Nichols and Charnoski legacy to new heights by featuring an impressive roster of skateboarding’s underground concrete heroes, like Jimmy The Greek and Red, as they take on an impressive array of amazing new monstrous concrete transitions–not to mention the powerful skating of Ben Krahn and Ryan Johnson as they gracefully destroy everything in sight. Emerica is proud to be part of a film that splendidly documents these lesser-seen but equally important aspects of skateboarding. Northwest will premiere at fourteen locations spanning the West Coast throughout May. If you have the opportunity, come on out and be part of Coan and Rick’s journey through the skater-poured concrete of Northwest . Order one up at http://www.ncpfilms.com.