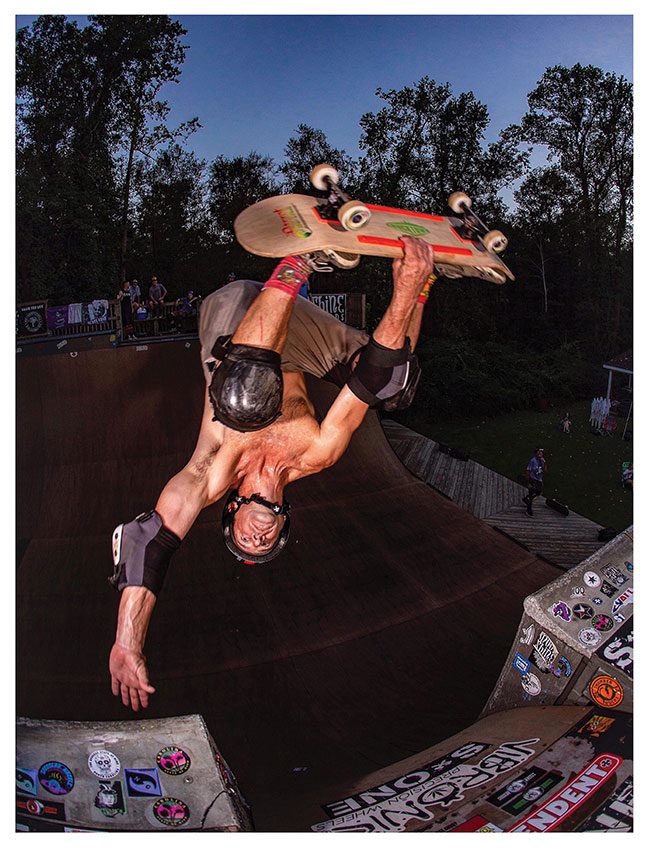 The first time I went to Skatopia, I witnessed some of the most hardcore vert and bowl riders ripping a huge indoor vert bowl that wasn’t for the faint of heart! One of those vert warriors was Otis, who was gnarly and skated with power and style. He’s been skating for years, just to have fun and travel to ride with those same people who share his passion to go high and get upside down with handplants wherever the vert leads them. The terrain doesn’t have to be perfect. As long as the crew is there, fun will be had and the egos are put to the wayside because they won’t find oxygen here. Otis is a skateboarder, pure and simple so, when he bought a house in Charleston, of course, he put in a backyard pool with brick paver coping, so the grinds would be loud and the smiles would be wide with pride. For us, the underground is where it’s at, and Otis is living and loving it!

I was born in Alabama Army hospital in ’71 and then I lived in various Navy towns.

What was the first skateboard you got?

In 1976, I got a fiberglass surfer scene top board with urethane wheels.

When was the first time you really got into skating?

In the summer of ’82, two of my neighborhood friends came back from Kona with a Powell Cab and a Variflex Vectra and I was in shock! This is what I was looking for! Big boards and there was a skateboard park in the area.

You go to Kona?

My parents took me there the next weekend and I got a Madrid Thruster, Gullwings and generic mini cubics.

When did you really get into skateboarding?

Right then and there. I had been looking for this over half my life.

Who were you skating with?

Norman Rickets and Ryan King. The same guys from the hood that found Kona. Norman’s dad was a carpenter that helped us build quarters and stuff.

When did you start doing tricks?

I was just trying to do what the other skaters at the park were doing.

Who was skating at the park? Buck, Barry, Baago, Barfield…..

They were ripping and it made me want to rip.

We moved to Fairfax, VA, in ‘85 and I start building and hanging at backyard halfpipes. This older kid, Bruce, starts building a ramp off the power lines and it turns out to be the ultimate training ground. 28’ plywood, 1/2 PVC coping, 3’ channel, extension, lights and generator on state property. My friend, Mike Scardinia, built a good ramp at his house and there were others in the area. Then Cedar Crest was built 45-minutes from my house.

So you started skating Cedar Crest?

Without a license, I had to rely on others to get there, so I did what I could. Biggest snake sessions, small sessions with the best skaters from around the country, best ramp… I would come back until it was gone, even after we moved.

Where did you move to?

We moved back to Orange Park, Florida.

“Nowadays we like to travel to skate spots and live a skater’s dream!”

Then you and I started skating together at Roland’s ramp in Lake Helen?

It was a little bit of Stone Edge, Kona, Houston, Cedar Crest, street, and then, all of a sudden I’m in my twenties with no life goals. I’m living in Florida and my parents are living in N. Virginia. I go stay with them and start going to Woodbridge to skate. I’m skating with some guys that I skated with back in the day that just want to skate also. This is ’94, and skating is dead, but we are having heavy sessions with Kenny Griffin, Billy Connerly, Rat, Opie, Devin, Micro, Alan Cheney, Sam Boo, Marcus, Lawrence, Krasauskas, and Bucky… I got the nickname Otis after skating better after a 12-pack; best sessions.

We meet up at Bruce’s in West Virginia?

A few of us from Woodbridge get word of a ramp in West Virginia where a skate jam is getting ready to happen and we go there. Bruce, Brandon, and you are getting ready to go to Europe for the last part of summer, after the first and last blowout at that property. You all went to Europe and we were still there when you got back. We were just skating and partying! We heard about the Hangar bowl being rebuilt outside when that crew showed up at the party. When Bruce got kicked out, we broke the King Dong ramp down and went to Charleston.

We were staying at Randy Lowe’s and all of a sudden you were gone.

I went on a snowboard trip to the Rockies and ended up in Jackson, WY.  I hurt my MCL at the end of the season, healed up in Seattle, and ended up at the first party at Bruce’s Ohio location. Great skating goes down there and then I end up back in Charleston.

You were skating Hank’s?

I was skating everyday with Hank, Jimmy, Randy, Torri, Maxwell, Todd Weldon, you, and the Woodbridge crew.

My car breaks down in Daytona going to the International House for the New Year. I stay with Aaron Cox and Dave Libhart and we skate Stone Edge every day in January and then I leave. I went back to working for Buck framing. Eventually, I end up back in Charleston.

Things get going really good in Charleston due to some great business decisions and a new indoor skatepark is built. We skated there every night for years. It had the killer street setups and tons of rippers! Eventually, the park closed.

How did you end up with your wife, Shannon?

She would bottom dwell at the indoor park and I would always heckle her. She went to another ramp and learned to drop in and then came back and dropped in at our ramp. I always liked her and, a few years later, I asked her out. Now we’re married and we have Audrey and Johnny who both love to skate! Nowadays we like to travel to skate spots and live a skater’s dream!

I’d like to thank my parents and Shannon and everybody else for the good and bad times that my love for skateboarding has given us!