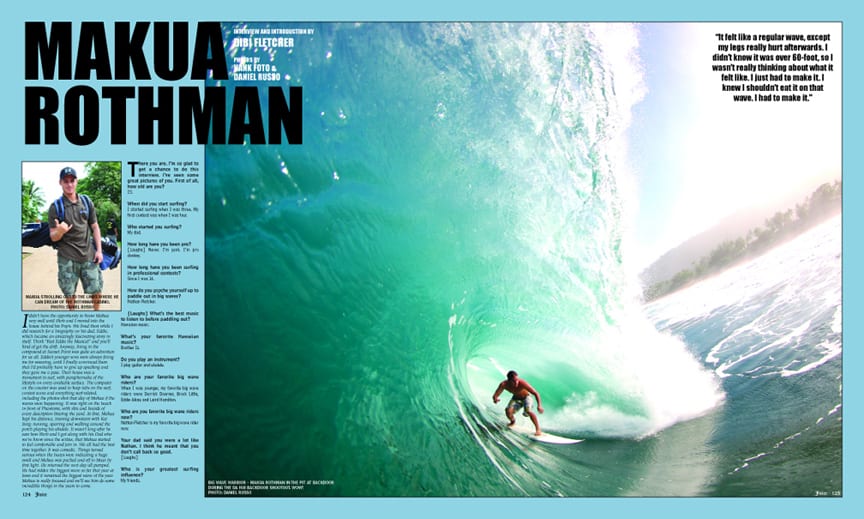 I didn’t have the opportunity to know Makua very well until Herb and I moved into the house behind his Pop’s. We lived there while I did research for a biography on his dad, Eddie, which became an amazingly fascinating story in itself. Think ‘Fast Eddie the Musical’ and you’ll kind of get the drift. Anyway, living in the compound at Sunset Point was quite an adventure for us all. Eddie’s younger sons were always fining me for swearing, until I finally convinced them that I’d probably have to give up speaking and they gave me a pass. Their house was a monument to surf, with paraphernalia of the lifestyle on every available surface. The computer on the counter was used to keep tabs on the surf, contest scene and everything surf-related, including the photos shot that day of Makua if the waves were happening. It was right on the beach in front of Phantoms, with skis and boards of every description littering the yard. At first, Makua kept his distance, training downstairs with Kai Borg: running, sparring and walking around the porch playing his ukulele. It wasn’t long after he saw how Herb and I got along with his Dad who we’ve know since the sixties, that Makua started to feel comfortable and join in. We all had the best time together. It was comedic. Things turned serious when the buoys were indicating a huge swell and Makua was packed and off to Maui by first light. He returned the next day all pumped. He had ridden the biggest wave so far that year at Jaws and it remained the biggest wave of the year. Makua is really focused and we’ll see him do some incredible things in the years to come.

“IT FELT LIKE A REGULAR WAVE, EXCEPT MY LEGS REALLY HURT AFTERWARDS. I DIDN’T KNOW IT WAS OVER 60-FOOT, SO I WASN’T REALLY THINKING ABOUT WHAT IT FELT LIKE. I JUST HAD TO MAKE IT. I KNEW I SHOULDN’T EAT IT ON THAT WAVE. I HAD TO MAKE IT.”

There you are. I’m so glad to get a chance to do this interview. I’ve seen some great pictures of you. First of all, how old are you?
23.

When did you start surfing?
I started surfing when I was three. My first contest was when I was four.

Who started you surfing?
My dad.

How long have you been pro?
[Laughs] Never. I’m junk. I’m pro donkey.

How long have you been surfing in professional contests?
Since I was 16.

How do you psyche yourself up to paddle out in big waves?
Nathan Fletcher.

[Laughs] What’s the best music to listen to before paddling out?
Hawaiian music.

Do you play an instrument?
I play guitar and ukulele.

Your dad said you were a lot like Nathan. I think he meant that you don’t call back so good.
[Laughs]

Who is your greatest surfing influence?
My friends.

In November 2002, you rode a wave at Jaws and won the biggest wave ridden that year. Can you explain how that feels to drop into a wave that’s over 60 foot?
It felt like a regular wave, except my legs really hurt afterwards. I didn’t know it was over 60-foot, so I wasn’t really thinking about what it felt like. I just had to make it. I knew I shouldn’t eat it on that wave. I had to make it.

Do you think that people felt different about your winning because of how young you were?
Nobody wanted me to win.

Was it because of your age?
No. It’s because of who I am. The surfing industry just don’t like me, for some reason. Fuck them. I don’t like them either.

[Laughs] How much prize money did you win?
I won $66,000. Some guy measured it at 74 feet, and told me they ripped me off. That’s how Billabong is. They’re always ripping guys off, even their riders.

What did you do with the money?
I put it in some land and spent some on myself.

Good for you. That’s smart. Who was your tow partner?
Ikaika Kalama.

How important is a partner in tow-in?
[Laughs] Well, you can’t tow yourself.

[Laughs] Okay. Let me reword that. Is it important to be friends with your tow partner or could it just be a stranger with great watercraft ability?
It’s got to be someone that’s like a brother to you. You’re not going to trust some donkey with your life in the water. They might not like you and they’d say, ‘Oh, I tried to get to him, but I couldn’t.’

Right. What’s your training schedule like?
I run and swim and do jujitsu. I do a lot of cross training like boxing and a lot of cardio stuff.

Do you have a trainer or a personal coach?
I usually go train with Rob Garcia who trains Oscar de La Hoya. By the time I come home, I’m solid.

I heard that you and Sunny Garcia pumped gas and signed autographs in Honolulu and Boost Mobile matched all the donations received for the Boys and Girls Club of Hawaii. Do you do other charity events?
[Laughs] Yeah. I have the Makua Rothman Foundation and everyone can donate as much as they want.

[Laughs] What do you sponsor with the money from that?
[Laughs] Oh, I just sponsor my spending habits. No. No.

[Laughs]
[Laughs] I’m trying to make it for the kids, but there are so many rich kids here on the North Shore that I’ll have to go somewhere else to find poor kids.

So I heard you won the second jewel in the Triple Crown at Sunset this year. Was it what you expected?
I didn’t think I was going to win, but I wasn’t there to lose. I felt happy to shut down Brazil’s famous day of surfing. They almost had the greatest day in Brazilian surfing history, but the ocean didn’t even want that. That’s what helped me win.

I know you like to gamble. What’s your favorite type of gambling?
I bet on everything. I guess my favorite is scraps.

You’re a big fight fan. Is it all forms of fighting or do you have a favorite?
I don’t care. As long they’re scrapping, it’s all good.

If you weren’t a surfer, what would you be doing?
[Laughs] I don’t know. I probably wouldn’t be too far from jail.

[Laughs] What’s the best thing about being a surfer?
You get to travel the world and do what you want when you want. You don’t have to surf when someone tells you. You can surf whenever you want to surf.