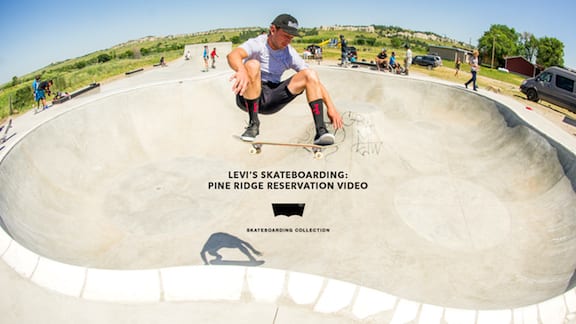 Levi’s® Skateboarding proudly presents: ‘Skateboarding In Pine Ridge’, a documentary chronicling the skatepark build in Pine Ridge, South Dakota.  Earlier this year the Stronghold Society, an organization dedicated to empowering youth through skateboarding, art and music, had taken notice of Levi’s® skate park build projects around the world. They reached out to the brand to consider the Pine Ridge Reservation, where a park build had begun two years ago and had yet to be completed.

Conversations ensued, and it was the impassioned story of life on the Pine Ridge Reservation – and what skateboarding had started to do for it’s entire community – that quickly moved the Levi’s® team into action. Pine Ridge is largely reported in the media as an impoverished community with a drug and alcohol epidemic and teen suicide rates seven to ten times greater than the National average. When the Levi’s® team visited the reservation, they saw a community transformed. They found a generation inspired – a group of people championing each other through their collective actions.

Prior to the initial Pine Ridge build back in 2013, there were less than a dozen skateboarders throughout the community. Two years later, there are now over one hundred. Levi’s® quickly teamed up with Grindline Skateparks to complete the Pine Ridge Park this past summer. Recognizing how much skateboarding had transformed peoples’ lives in Pine Ridge, the two groups agreed to build a second park in the neighboring town of Manderson. Leading up to the week that both parks opened, Josh Matthews, Marius Syvanen, Pat Moran and Joey Pepper all flew out to skate with the youth of Pine Ridge and be inspired by their growing skate scene.

“You hear a lot of professional skateboarders saying that skateboarding saves lives. You literally see that happening out here on the Pine Ridge Rez.” – Walt Pourier (Stronghold Society)

“You build a world class skatepark in an isolated area, the skaters there will literally feel more connected to the outside world than if you built them something low quality.” – Jeff Ament (Pearl Jam & Vitalogy Foundation)

Please join us in celebrating the community of Pine Ridge on Wednesday, October 21st when we release the full-length documentary directed by Greg Hunt on levi.com/skateboarding. Featuring a score by David Pajo with an additional song written by Cat Power, you cannot help but be moved by this film – by the Lakota people of the Pine Ridge Reservation. A trailer for the film can be seen here.