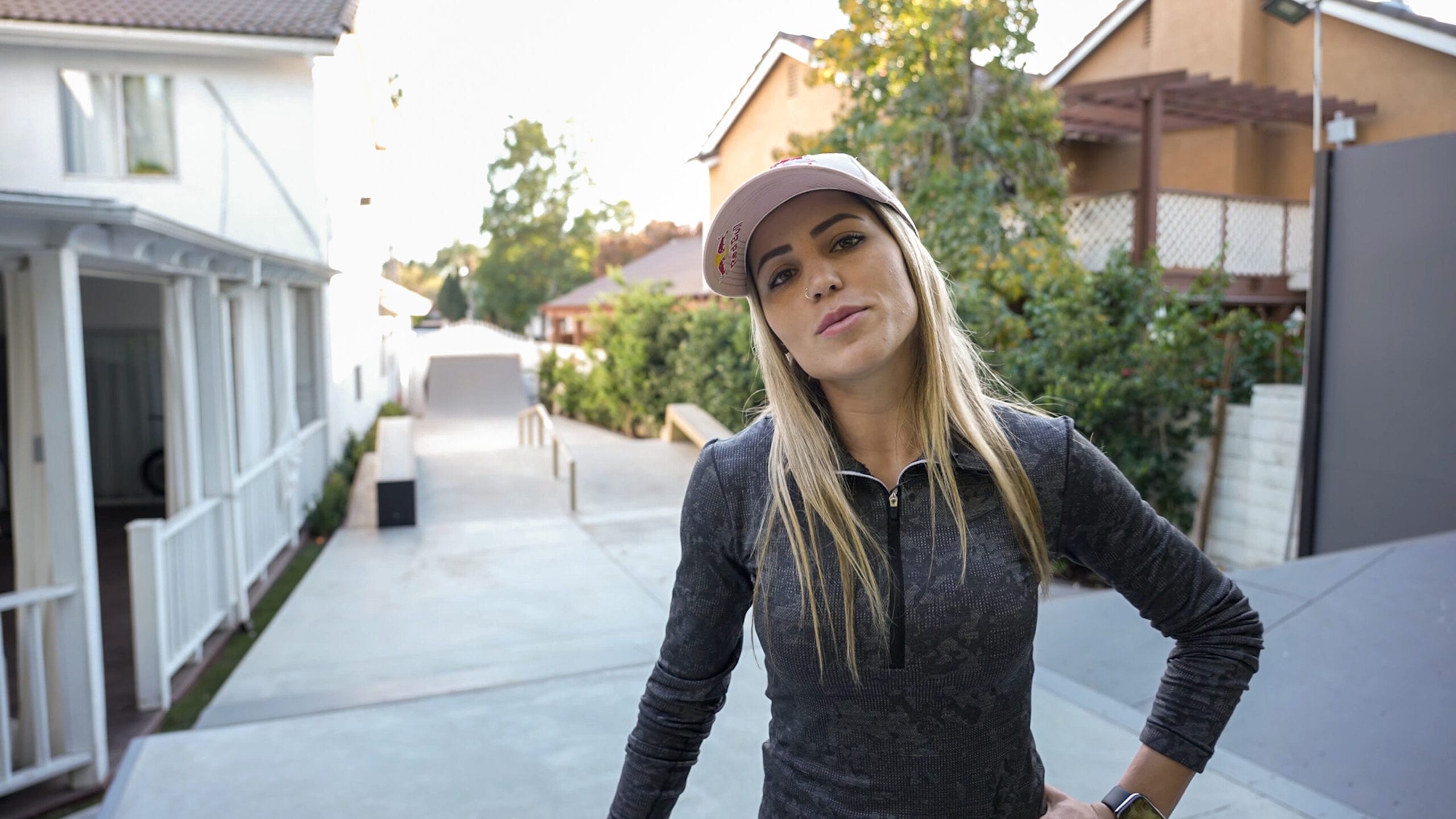 Letícia Bufoni may only be 28 years of age, however she has been a global trailblazer for women’s skateboarding for well over a decade now. With Tokyo just around the corner, the Brazilian has been hard at work training in her backyard set-up at her Los Angles home.

Here is all you need to know:

– In order to keep her skills and fitness in tip-top shape heading into the Summer Games, where skateboarding is making its debut, Bufoni has created an amazing skate park in her Los Angeles home backyard.

– There are endless possibilities to what she can do after installing a Box, Euro-Gap, Hand rail, Hubbas and Quarter-Pipes in her outdoors space while she keeps her fitness up with weights and stretching in her own gym.

– She revealed: “I got my skate park renewed about a year ago and I added some stuff that wasn’t here because I want a skate park that I can train for a competition. This Hand rail, it’s perfect for learning tricks. This stair is super small and fun. The Hubba too. It’s like what they have in competition, but a little bit smaller. I designed the whole thing. The A-Frame, it’s my favourite thing to skate. It’s super fun. It’s a small one so you can learn tricks, skate for hours. When I’m not travelling, just come to the backyard and skate.”

– She has made such an impresson in worldwide sport consciousness that Forbes named her as one of The Most Powerful Women In International Sports for 2018.

– When she is not training, she unwinds by riding her new Ryker motorbike, having barbecues with friends and playing teqball, a soccer game that uses a table like ping pong.

Here is what else Bufoni has to say about the rise of women’s skateboarding and her legacy:

What do you think is necessary for women’s skateboarding to gain even more strength?

Women’s skateboarding has grown and changed a lot in recent years. It’s bizarre how much it has grown. In the world ranking [street], three of the first four are Brazilian. The Brazilian women’s skateboarding is really strong in performance but we need a little more support. I can’t complain, I have excellent partners and sponsors who help me, so I’m one of the lucky ones. Speaking more for the others, I see many girls who are really good at skateboarding and have no support, while there are few events. Visibility is what is lacking, because the girls are really good – there is no lack of quality.

What do you think has helped their development?

Nowadays, you have YouTube, Instagram, Twitter… you see all the videos and maneuvres in real time, at any time. When I started, things were not like that. Months after I started skating, I got a DVD that had girls skateboarding. So, six months before I started practicing, I didn’t know that girls could skate. It was much more difficult. Nowadays, with all the access we have from social networks, girls are evolving very fast and it is very beautiful to see the Brazilian skate scene.

What kind of legacy do you want to leave?

I was not the first woman on the Brazilian skateboard to appear. There were several before me but, until I retire, I want girls to look at me and see that it is possible to follow their dreams and realise each one of them. This is what I always wanted to leave as a legacy.

Is stopping skating an option for you?

Skateboarding has been part of my life for many years and it is difficult to describe what it represents. It is a passion that I cannot imagine ever stopping. Even when I’m very old, I want to at least ride a longboard on the beach. I even think: when it comes to having a child, how am I going to stop skating for a year? It will be very difficult. The idea is to compete for many years, until I can’t any more. But skateboarding is for life!

What are your expectations for 2021?

I hope that everything will return to normal, that this will all get to an end. I really want competitions and training to be back so I can go to Tokyo. Getting there and representing Brazil will be a great dream come true. I want to bring the medal here, but my focus is to get there first.

PrevPreviousThis is Strength. This is Redemption. This is “Billy.”
NextDinosaur Jr. New Album Sweep It Into SpaceNext