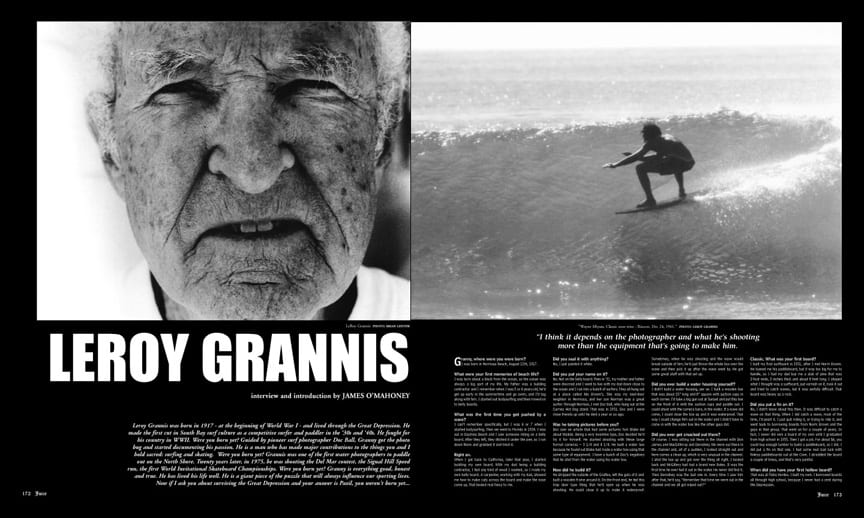 Leroy Grannis was born in 1917 – at the beginning of World War I – and lived through the Great Depression. He made the first cut in South Bay surf culture as a competitive surfer and paddler in the ’30s and ’40s. He fought for his country in WWII. Were you born yet? Guided by pioneer surf photographer Doc Ball, Granny got the photo bug and started documenting his passion. He is a man who has made major contributions to the things you and I hold sacred: surfing and skating. Were you born yet? Grannis was one of the first water photographers to paddle out on the North Shore. Twenty years later, in 1975, he was shooting the Del Mar contest, the Signal Hill Speed run, the first World Invitational Skateboard Championships. Were you born yet? Granny is everything good, honest and true. He has lived his life well. He is a giant piece of the puzzle that will always influence our sporting lives. Now if I ask you about surviving the Great Depression and your answer is Paxil, you weren’t born yet…

“WE HAD SURFED ALL DAY AT HERMOSA PIER. WE WERE JUST LAYING AROUND WITH THE RADIO, TALKING TO EACH OTHER AND ALL OF A SUDDEN, WE HEARD THAT THE JAPANESE WERE BOMBING PEARL HARBOR. WE LOOKED AT EACH OTHER AND REALIZED THAT NOTHING WAS EVER GOING TO BE THE SAME.”

What were your first memories of beach life?
I was born about a block from the ocean, so the ocean was always a big part of my life. My father was a building contractor and I remember when I was 5 or 6 years old, he’d get up early in the summertime and go swim, and I’d tag along with him. I started out bodysurfing and then moved on to belly boards.

What was the first time you got pushed by a wave?
I can’t remember specifically, but I was 6 or 7 when I started bodysurfing. Then we went to Florida in 1924. I was out in Daytona Beach and I saw someone riding on a belly board. After they left, they ditched it under the pier, so I ran down there and grabbed it and tried it.

Right on.
When I got back to California, later that year, I started building my own board. With my dad being a building contractor, I had any kind of wood I wanted, so I made my own belly board. A carpenter, working with my dad, showed me how to make cuts across the board and make the nose come up. That looked real fancy to me.

Did you seal it with anything?
No, I just painted it white.

Did you put your name on it?
No. Not on the belly board. Then in ’31, my mother and father were divorced and I went to live with my dad down close to the ocean and I run into a bunch of surfers. They all hung out at a place called Ma Brown’s. She was my next-door neighbor in Hermosa, and her son Norman was a great surfer. Through Norman, I met Doc Ball, who hung out at the Curries Hot Dog stand. That was in 1931. Doc and I were close friends up until he died a year or so ago.

Was he taking pictures before you?
Doc saw an article that had some pictures Tom Blake did about Waikiki. Being a very inventive type, Doc decided he’d try it for himself. He started shooting with these large format cameras – 3 1/4 and 4 1/4. He built a water box because he found out Blake had made a water box using that same type of equipment. I have a bunch of Doc’s negatives that he shot from the water using his water box.

How did he build it?
He stripped the outside of the Graflex, left the guts of it and built a wooden frame around it. On the front end, he had this trap door type thing that he’d open up when he was shooting. He could close it up to make it waterproof. Sometimes, when he was shooting and the wave would break outside of him, he’d just throw the whole box over the wave and then pick it up after the wave went by. He got some great stuff with that set up.

Did you ever build a water housing yourself?
I didn’t build a water housing, per se. I built a wooden box that was about 15 inches long and 8 inches square with suction cups in each corner. I’d take a big gun out at Sunset and put this box on the front of it with the suction cups and paddle out. I could shoot with the camera bare, in the water. If a wave did come, I could close the box up and it was waterproof. That way I could change film out in the water and I didn’t have to come in with the water box like the other guys did.

Classic. What was your first board?
I built my first surfboard in 1931, after I met Norm Brown. He loaned me his paddleboard, but it was too big for me to handle, so I had my dad buy me a slab of pine that was 2-foot wide, 2 inches thick and about 8 feet long. I shaped what I thought was a surfboard, put varnish on it, took it out and tried to catch waves, but it was awfully difficult. That board was heavy as a rock.

Did you put a fin on it?
No, I didn’t know about fins then. It was difficult to catch a wave on that thing. When I did catch a wave, most of the time, I’d pearl it. I just quit riding it, or trying to ride it, and went back to borrowing boards from Norm Brown and the guys in that group. That went on for a couple of years. In fact, I never did own a board of my own until I graduated from high school in 1935. Then I got a job. For about $6, you could buy enough lumber to build a paddleboard, so I did. I did put a fin on that one. I had some real bad luck with finless paddleboards out at the Cove. I straddled the board a couple of times, and that’s very painful.

When did you have your first hollow board?
That was at Palos Verdes. I built my own. I borrowed boards all through high school, because I never had a cent during the Depression.

What was the Depression like?
Fortunately, almost everyone was in the same boat. We just didn’t have anything. I’d go for months without a penny in my pocket. Then I got a job sawing wood for my dad at 30 cents an hour in the spring of ’35 and I was rich. It was a good learning experience. We had nothing and we learned to get along with nothing.

Did you have a car?
No, there were probably only 20 kids in my high school that had cars. They all lived in Palos Verdes and were the children of rich parents.

Palos Verdes was affluent back then?
Yeah, they had a golf course. A number of rich people lived up there.

If you have a golf course, you’re rich?
Well, they were. I don’t know if that was an influencing factor or not.

What’s your list of influential surfers from each generation?
In the ’30s, I was really impressed with Preston Peterson, every time I saw him. He not only invented different shaped boards, but he was a tremendous surfer and a great paddler. He was the only paddler I raced against that I could never beat. I had him beat at Seal Beach once, but I couldn’t catch a wave in on the end of it and he beat me on the run up to the beach. Pete was just an outstanding waterman. He had a boat salvage business and he knew all about the Channel Islands. He took Hop [Swarts] and me, and our crew of boyscout surfers, out to the Channel Islands on a weekend trip and showed us where to surf. The thing that stands out in my mind is, at that time at low tide, all the rocks were covered with abalone.

Oh, yeah, and they were free.
Not anymore.

What about in the ’40s?
I saw a bunch of young surfers come along during that time. One of them was Dale Velzy. Dale was an outstanding surfer in the younger group. My group was Hop Swarts, Pete Peterson and Lorrin Thurston.