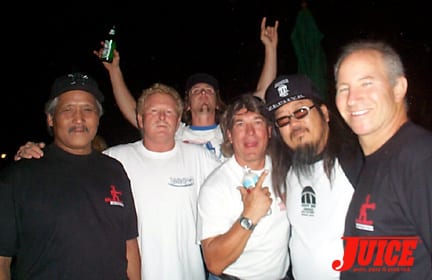 At 9PM there was live O.G. punk rock by FIST OF FURY. The boyz rocked all of Venice for over an hour with an original set spiced with a cover of the S.T. “Facist Pig” thrown in for respect and a cover of Aggression’s “Intense Energy”. R.I.P. Henry Knowles…

Fist of Fury floored the crowd with machine gun drummer Bud Lopez on the skins, and slick and heavy DT bass by Dave Flynn and guitar by the famous Luichi Mayorga. With new guitarist, Luichi, (former Suicidal Tendencies bass player) in place, the D.T. S.T. tradition carries on. This was the first time Fist of Fury had played in three months after ex-guitar player Mike Pacquin left the band and Luichi decided to pick up the guitar and join Murray’s FIST OF FURY.

After the punk rock attack, Dan Levy (Juice Magazine) started the hour long raffle of the 140 pounds of skateboarding product that had been donated for the event – 14 boards, 9 sets of wheels, 8 sets of trucks and a gang of t-shirts, DVDs and CDS. Donations to the raffle included product from Z-Cult Skateboards, Juice Magazine, Koping Killer Skateboards, Jeff Ho/Zephyr Productions, Grind King, Venice Breakwater, Bulldog Skates, Z-Flex, Carver Skateboards, Santa Monica Airlines, Alva Skateboards, Tracker, Cove Surf Co, Z Sports Distribution, Skaterbrained Girls Apparel, Shitfire Wheels, Red Bull and many more. $1 of each raffle ticket went to Christian Hosoi’s legal fund. Thanks to everyone that donated to the raffle or the beer fund or bought a t-shirt or a raffle ticket.

At one point in the evening, you could look around and see three generations of Dogtown – the original Zephyr competition team, the ’80s Dogtowners, the ’90s Boyz and the VSA army that holds it down now as well as the children of all of the above. San Diego, San Francisco, Hollywood, Malibu, East LA, Brea, Costa Mesa, Long Beach and H.B. were in the house. There were folks from Florida, Washington, Virginia, Massachusetts and Japan. It was a party full of people that love skateboarding and punk rock and who don’t just talk about it but support it every day in a very real way.

The coolest thing was that everyone got along and everyone had a good attitude. There were no fights; not even an argument… Everyone was cool and everyone had fun. The band played and there wasn’t a cop in sight all night long. It was rad. It was a full night of partying in Venice and no one fell off the roof and no one got arrested. It was one of the best parties we’ve ever had and we want to thank everyone for being there!