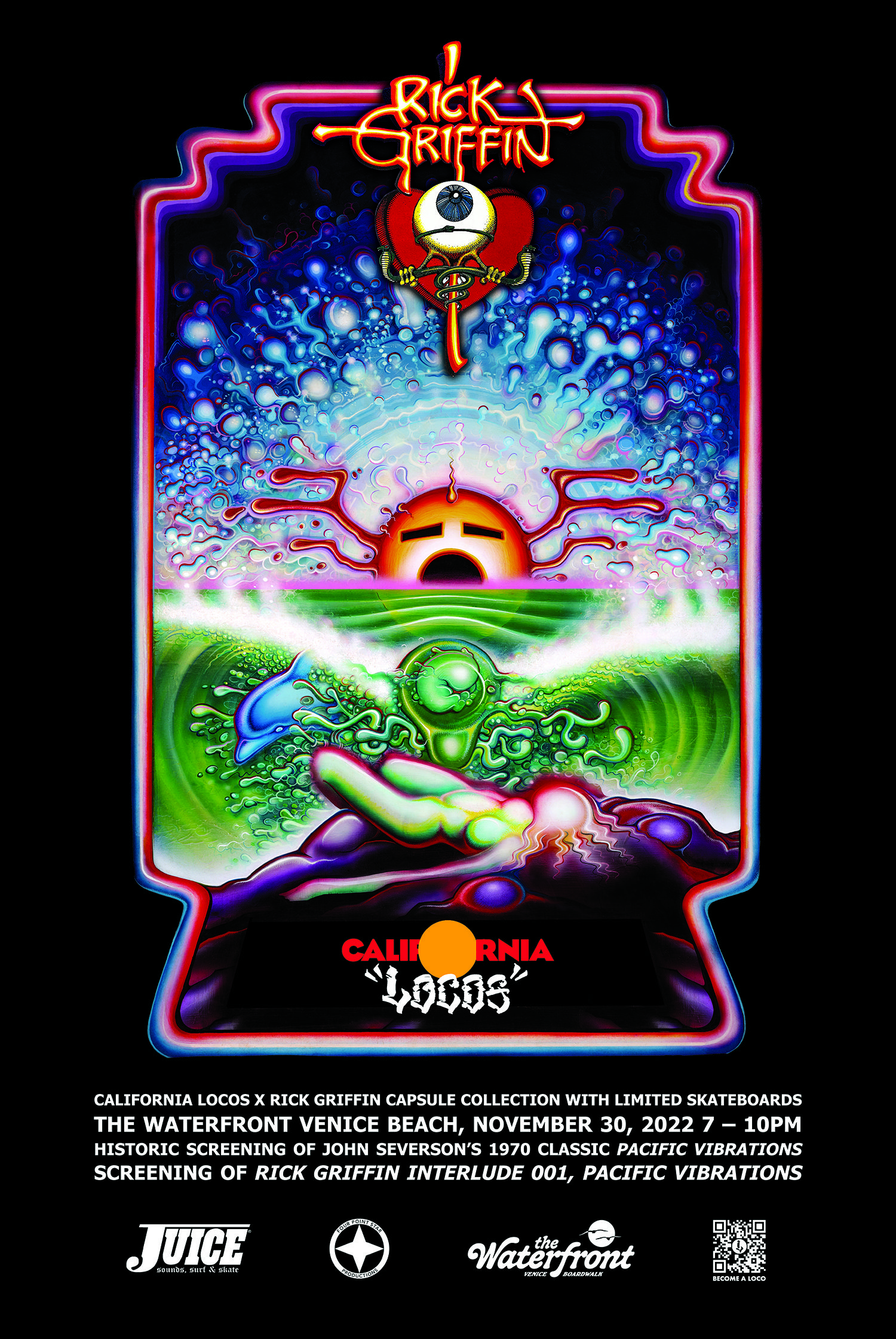 California Locos is a one of a kind movement encapsulating the soulful communities of art, music, skateboarding and surfing and, on this big Wednesday, November 30th, 2022, the tribe came together at the Waterfront Venice to celebrate the life’s work of Rick Griffin.

Juice Magazine had the honor to present this magical and historic night as the titans of our cultures expressed thoughts of their shared time with Rick Griffin. Dave Tourjé, Gary Wong, John Van Hamersveld, Chaz Bojórquez, Norton Wisdom, and Robert Williams passed on visceral and engaging stories, regaling, with class and vigor, the true essence of Rick’s impact on our beloved culture.

Talk story is the catalyst and instrument for carrying on legacy and traditions in our unique worlds and, on this night, everyone in attendance felt every word in our bones and in our souls with admiration and respect for not only Rick’s work, but his life as a person and the impact he truly continues to have.

Griffin’s family was in attendance and their presence resonated deeply with all of us. Flaven Griffin Clayton, Rick’s first daughter, took to the stage to share her thoughts of the celebration. Her words captivated and confirmed the meaning and value of what the California Locos movement does to carry on tradition and legacy with the care and effort put into the collection on hand.

In the spirit of celebration, Dave Tourje, Steve Barilotti, and Julian Clark worked tirelessly to put together a short film, titled Rick Griffin Interlude 001, Pacific Vibrations, showcasing Rick’s most significant masterpieces. As the movie rolled across the screen, Griffin’s deep voice filled the air and, upon its conclusion, there were few dry eyes in the room. It was as if Rick had manifested waves from tears so we could all ride this wave together with his spirited presence paddling in for us all.

Following our perfect wave, for the first time in 50 years, a showing of Pacific Vibrations commenced, This classic surf film created by John Severson, R.I.P., would inspire one of Rick Griffin’s most legendary poster creations and, would be Severson’s last surf film.

Each time the California Locos host an event, the stars align and legends amass. On this night, the legends per capita quota was over the top. California Locos founder, Dave Tourjé, set a new standard for how to kick off a gathering of the art tribe in true hospitable style by hosting an impressive group dinner with invited artists, surfers, skateboarders, musicians, authors, filmmakers, and Olympians, to break bread with the Rick Griffin family and share a few hours of purely golden community.

More than 80 special guests got the opportunity to share a once in a lifetime meal. As someone that’s been to many events, I have never seen anything quite like it, nor will I soon forget it. It was truly special. Thank you, Dave!

Friends and family and peers of RIck Griffin then took to the stage to share mesmerizing stories of Griffin and it was absolutely memorable in every way. The talks began with a heartfelt tribute by Herbie Fletcher, in honor of Art Brewer (R.I.P.) who sadly just passed away on November 9, 2022. Art was not only a good friend of many of those on stage and in the crowd, he was also the photographer for Pacific Vibrations. As Herbie explained Art Brewer’s legacy, he said, “He’s taken the greatest images of surfing. They are unreal. I’m a little emotional, but Art was the greatest photographer. We went on trips together and he put me on the cover of magazines. I’ve still got the photos and the memories. Those memories mean a lot. So we’re here to see Pacific Vibrations and honor Rick Griffin who’s passed away and was a great image cartoonist. I loved looking at Surfer magazine when I was a kid… It’s great to be part of the surfing world and everything that is going on…. and I’m still doing it.” Herbie words and dedication to his friends, Art and Rick, set the tone of what came next.

Dan Levy of Juice Magazine, emcee for the evening, then called Jake Mathews, owner of The Waterfront, to the stage saying, “Jake really cares about this neighborhood and he is a community-minded thinker.”

Jake then shared, “This place is designed for all of you, so you all being here makes it come to life. The restaurant business is tough and it’s been a rough couple of years. Nights like this make it feel like it’s all worth it. Thanks to Dan and Terri for doing this and bringing you all together.”

Then it was time for the California Locos supergroup to speak and share their memories of Rick Griffin. It began with Dave Tourjé, Northeast L.A. skateboarder, and unbelievably accomplished artist, who also formed the Chouinard Foundation. Dave Tourjé took this unique occasion to recognize and welcome the Griffin family in attendance, including Flaven Griffin Clayton, Adelia Rose Griffin, Todd Clayton, Miles Griffin, and Ida Griffin, who was Rick Griffin’s wife. He also recognized Glen Clark who inspired this night with his copy of Pacific Vibrations, and Steve Barilotti, who worked at Surfer magazine and then worked on the short film in honor of Griffin. Tara O’Shea was also recognized for her successful efforts in connecting the California Locos with the Griffin family.

John Van Hamersveld, creator of the Endless Summer poster, and over 300 album covers including The Beatles Magical Mystery Tour, The Rolling Stones Exile on Main St., The Doors An American Prayer, Blondie Autoamerican, Jefferson Airplane Crown of Creation, Grateful Dead Skeletons from the Closet, Sly and the Family Stone Small Talk and much more, led the charge next. JVH described he and Griffin both being surfers in Palos Verdes and Torrance and then later working together at Surfer. As they both ventured from surf culture into the psychedelic hippie culture, in a cool blend of fate, Griffin did the Hendrix concert poster in San Francisco, while JVH did the Hendrix poster in L.A.. This was just the tip of the iceberg of Griffin stories and lore to be shared.

Gary Wong is the O.G. living legend blues musician and artist, otherwise known as Charlie Chan. He spoke of a few of his experiences with Rick Griffin, which included the origination of the Jook Savages, as well as his memories of Rick Griffin drawing the original logo for Rolling Stone Magazine. Wong’s memories were not only epic in scale, but historically mind-blowing.

Up next was Robert Williams, founder of Juxtapoz magazine, and one of the most culturally significant humans living today, whose artistry in essence coined the term lowbrow, and pop surrealism, and put it into the lexicon of ‘West Coast Outlaw culture’. Williams not only led art movements and magazines, did the Guns N Roses Appetite for Destruction album cover and worked at Zap Comix, he also championed this night’s discussion in tribute to his close friend, Rick, with his brilliant story-telling.

Next up, Chaz Bojórquez, godfather of East L.A. graffiti culture, and all around good person, shared his memory of skateboarding from Highland Park to Hollywood barefooted and meeting some skater guys who introduced him to Surfer magazine, and Rick Griffin’s Murphy cartoon. He eventually met Marcel Duchamp and then Leonardo Dicaprio and Leo’s godfather, Robert Williams, who, years later introduced him to Rick Griffin at the Buena Park Cars of the Stars. He spoke of Griffin’s lettering style and described meeting him with great reverence and said, “He was my hero. Rick Griffin was my hero.”

Norton Wisdom is a legendary artist and one of our favorite people and has been known to paint live on stage with some of the most famous musicians, like The Doors, and he’s been saying, “No War” for years. He remembered the Murphy cartoon that Rick Griffin created as a major influence on his beginning days of painting. His creative collisions with Rick, through the years, continued to impact his life, with his artistic mastery and wizardry.

Flaven Griffin Clayton, was so moved by the events that transpired, that she took the stage to give thanks on behalf of her family and in memory of her dad. She said, “I just want to thank everyone for being here. I know everybody has their own story about my dad, including us kids. The thing that I want people to know is that I think my dad is one of the greatest 20th Century artists.” She ended her comments by thanking the California Locos for doing the collaboration and honoring her dad, and then she gestured to all the legends on stage and said, “Thank you for his comrades. I grew up with these guys since I was just a little kid. [laughs] We always had really weird people in our house, and we had paintbrushes in the silverware drawer, and we had old funky cars out in front of our house and I was always embarrassed about it, but it’s legend. Thank you everybody.”

Everyone left with a smile and a small piece of Rick Griffin’s art in hand, in the VIP lanyards, which contained a miniature version of Griffin’s artwork for the Pacific Vibrations poster.

One of the coolest parts of the night was omitted by mistake. Earlier in the day, Juice Magazine reached out to legendary skateboarder, surfer, and artist, Steve Olson to ask him to write a tribute to Rick Griffin. As we didn’t get a chance to share the words that Olson wrote, we share them here now. Thank you, Olson. Thank you, RIck Griffin.

A Tribute to Rick Griffin by Steve Olson

A style all its own.

As if it were magic.

So easy to see.

From where, is the question.

A master of his own.

Some are just that,

and that is that.

This is, just that…

Til death do we part,

From the bottom of our hearts…

CALIFORNIA LOCOS was founded in 2011 by LA artist Dave Tourjé when he called upon his best friends in art Chaz Bojórquez, John Van Hamersveld, Norton Wisdom and Gary Wong to form the multicultural group that reflected the LA subcultures of surf, skate, rock, graffiti, punk and fine art. To keep up with the CALIFORNIA LOCOS, connect with the brand at CaliforniaLocos.com and on Instagram: @californialocos.

The Waterfront sits at the base of where the Pacific Ocean Park Pier (POP) once existed, a place of legend where a young group of surf skaters launched the Dogtown & Z-Boys aesthetic. The Waterfront features beautiful views of the Pacific Ocean, from the world-famous Venice Beach boardwalk, and offers California cuisine with carefully selected seasonal local produce and curated beverage menus. Get Waterfront reservations at https://www.thewaterfrontvenice.com

In 1969, Rick Griffin moved his family back from Northern to Southern California to work on the poster art for John Severson’s last surf movie, Pacific Vibrations. The poster was colorful, beautiful and full of the miracle of life after just delivering his own daughter.