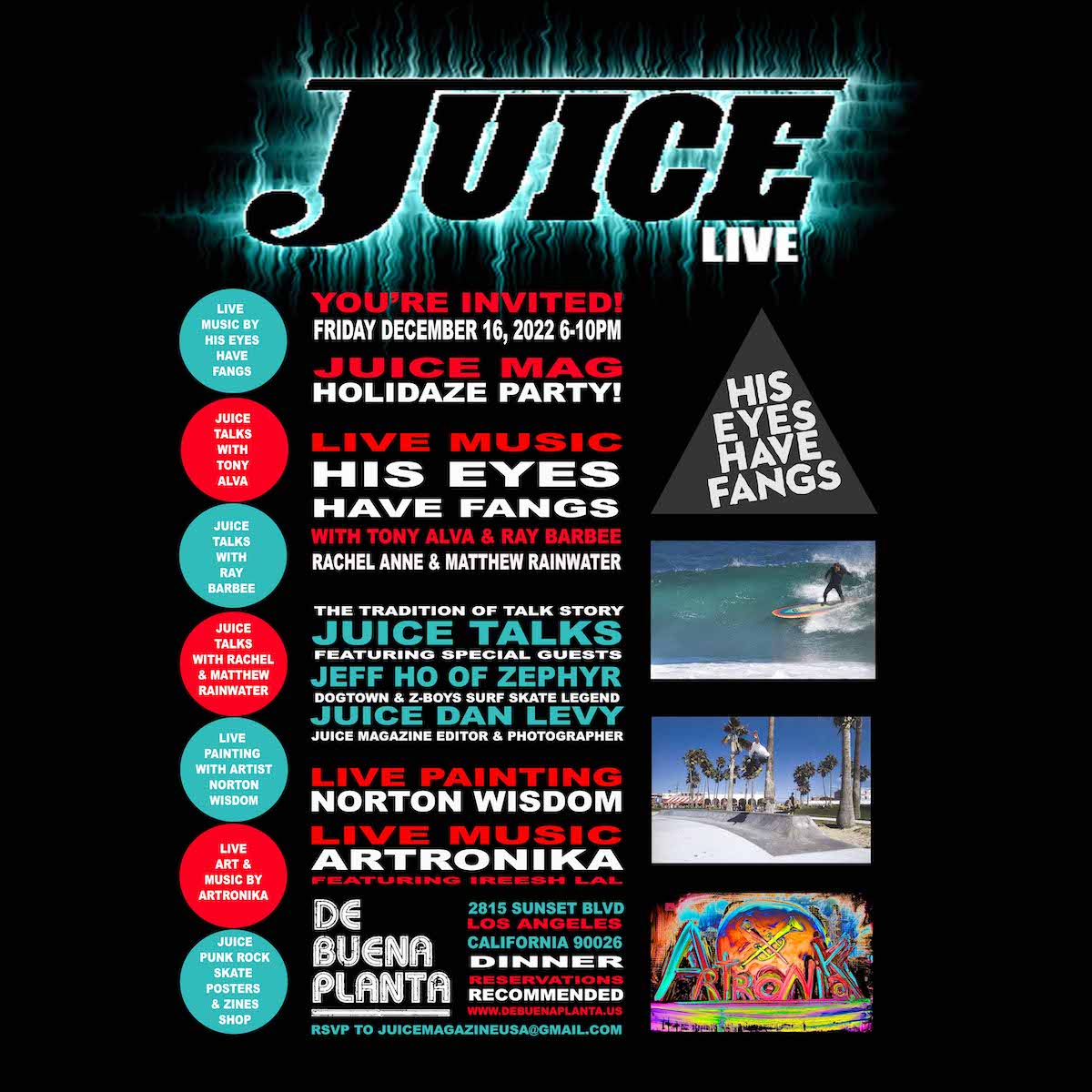 Juice Holidaze Party with His Eyes Have Fangs

You are invited to the Juice Holidaze Party, on Friday, December 16, 2022, from 6-10pm, in Silverlake at one of the hottest new spots in L.A., De Buena Planta, located at 2815 Sunset Blvd, Los Angeles, California 90026, where we will showcase the superb supergroup, His Eyes Have Fangs, starring Tony Alva, Ray Barbee, Rachel Anne and Matthew Rainwater, and host an art+music experience called Artronika with Norton Wisdom and Ireesh Lal, and present Juice Talks Episode 2 with hosts Dan Levy and Jeff Ho, and set up our Juice Punk Rock Skate Poster Prints & Zines Shop.

At 9pm, the party will feature Neo Noir Experimental Rock by His Eyes Have Fangs, which stars two Skateboarding Hall of Fame inductees, Tony Alva (bass) and Ray Barbee (guitar), who are also extremely accomplished musicians. His Eyes Have Fangs features the lovely one and only, Rachel Anne Rainwater (vocals), backed by the supremely talented, Matthew Rainwater on drums.

Tony Alva: “How in the hell can you describe what Tony Alva means to the world of skateboarding? T.A. was the first skater to set standards. Nobody did it better or with more style than T.A. He was the first world champ, first in the world record books, first winner of the SkateBoarder Poll and the very first to pull off frontside airs in pools. Nobody was a bigger rock star skater than Alva; Not then and not now. I can’t tell you how many times he showed up at a skatepark and everybody would just stop skating and take notes. He paved the road that all modern day skaters are riding down. The name Tony Alva is still burning bright in the skateboard world. Can you name anyone else who has been doing it as long and as good as Alva? Don’t think he’s ready to give it up anytime soon, because if you did, you’d be kidding yourself. I bet if you asked him he’d say it’s just beginning (again). I’d say it’s a safe bet to believe he’s going to be around for awhile. ‘Yeah, T.A. You rule, homeboy. Thanks for all the memories. Keep it real like you always have. Never say it’s over.’ Your brother for life, JAY BOY.”

Ray Barbee: The Skateboarding Hall of Fame said it best, “Ray Barbee is simply one of the most beloved pro skateboarders to have emerged from the late-1980s and early-’90s. Born in San Francisco, California in 1971, Ray started skateboarding at age 12 in 1983. Although Ray has always enjoyed skating all terrain, he turned pro mainly as a street skater for Powell-Peralta in 1989, then rode for Lance Mountain’s brand, the Firm, for much of the ’90s. Next came a spot on Element, followed by Mark Gonzales’ brand, Krooked, who Ray rides for today. Aside from skating, Ray enjoys creating music.”

To give you a better idea of the magic that is going to be present on this special night, you can see the decades long connection between Jeff Ho and Tony Alva in this moment where Jeff pays tribute to Jboy, and Tony pays respect to Jeff Ho, his mentor and sponsor from the Zephyr / Z-Boys days.

At 7pm, Juice will kick off the night with a set by Artronika, featuring live painting by Norton Wisdom, creating ephemeral watercolor paintings on a fiberglass canvas, as Ireesh Lal plays an eclectic set of electronic & world music while improvising on trumpet and synths. Norton Wisdom and Ireesh Lal perform with various bands, and tour the USA as well as maintaining a residency in Los Angeles.

You can see Norton Wisdom in this short interview clip with Steve Olson, and read more about Norton in his interview in Juice Magazine.

Norton Wisdom also explains his relationship to Surf Skate Style in this interview for Juice.

At 6pm, Juice Dan Levy, Juice Magazine Managing Editor and Creative Director, will be autographing posters and giving the first 30 guests to arrive a very special gift of a limited edition print featuring Jesse Martinez autographed by Juice Dan Levy at our Juice Punk Rock Skate Poster, Prints and Zine shop, where you will also be able to find rare collectible back issues of Juice Magazine.

This is going to be a jam packed night full of festive festivities and Dinner Reservations are recommended to get a table and order the great food and drinks that De Buena Planta offers at 2815 Sunset Blvd, Los Angeles, California.

Reservations for Dinner are recommended at: BOOK TABLE RESERVATION AT DE BUENA PLANTA.

De Buena Planta Dinner Reservations can be booked at

You may find a price list for photo prints, t-shirts and posters available at the show, as well as rare collectibles available for purchase at JuiceMagazine.com after the show.