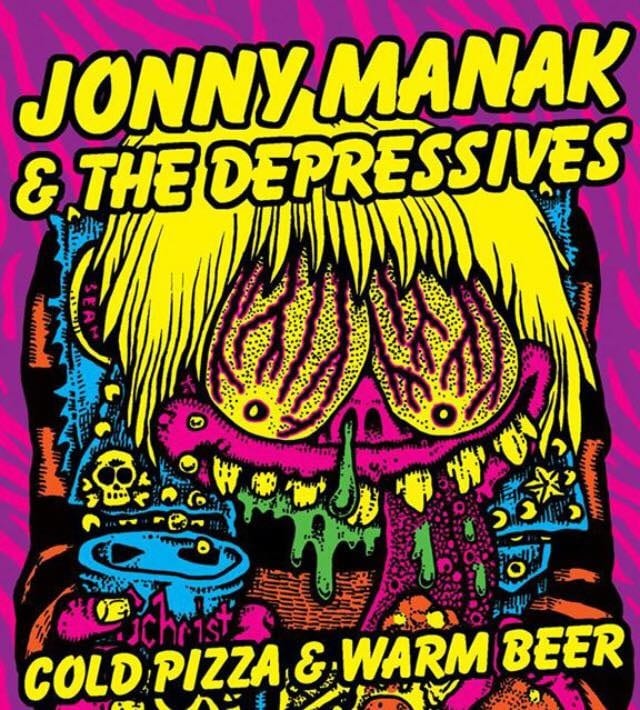 If you can imagine a mixture of 50’s rock ‘n’ roll (Chuck Berry, Little Richard, Link Wray), 60’s garage rock (The Sonics, The Chocolate Watch Band, The Stooges) and 70’s punk (The Dead Boys, Radio Birdman and The Ramones) you have a good idea on what to expect from Jonny Manak & The Depressives’ new album Cold Pizza and Warm Beer.  Cold Pizza And Warm Beer is Jonny’s fifth full length and will mark the third joint release by Self Destructo Records and Reach Around Records.

Punk, garage, surf, it’s all there! Written over the course of a year, the album is comprised of seventeen tracks that mark thirty five minutes of music which touch on topics such as corporate life (“Money For Free”), food preparation laziness (“Cold Pizza And Warm Beer”), personal expressions with the recent passing of his father (“Read Between The Lines”) and going out and partying with his main squeeze (“VegASS”).

Jonny is not new to the scene, he’s been playing in bands since he was nine!  His very first stint was as the lead singer of his older brother’s band Peanut Butter Wolf (the same name that his brother’s known as in the hip hop world). Since then, he’s played bass, guitar or drums with the likes of:  The Clay Wheels, The Cliftons, Texas Thieves, Fang, The Resistoleros, The Odd Numbers, The Forgotten and a bunch of other bands you’ve probably never heard of.

You Give Me Goosebumps

Read Between The Lines

Live In A Cube

I Want You To Know

PrevPreviousO’Mahoney Mondays: The First Skateboard Tool
NextRonnie Wood Book “How Can It Be? A Rock & Roll Diary”Next