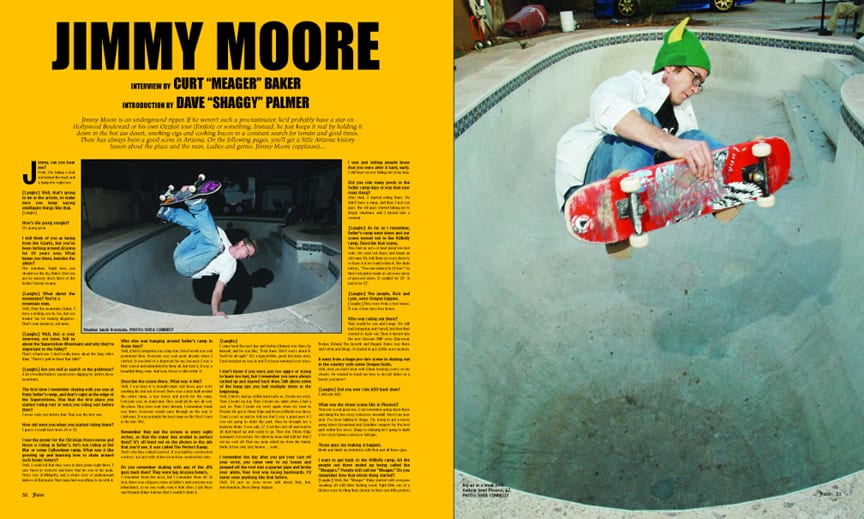 Jimmy Moore is an underground ripper. If he weren’t such a procrastinator, he’d probably have a star on Hollywood Boulevard or his own Ozzfest tour (Jimfest) or something. Instead, he just keeps it real by holding it down in the hot ass desert, smoking cigs and cooking bacon in a constant search for terrain and good times. There has always been a good scene in Arizona. On the following pages, you’ll get a little Arizona history lesson about the place and the man. Ladies and germs, Jimmy Moore (applause)…

“WE HAD ABOUT 30 POOLS GOING AT ONCE, ALL WITHIN TWO SQUARE MILES. YOU COULD JUST GO FROM ONE YARD TO THE NEXT, SO I STARTED IN ON THE CONCRETE.”

Jimmy, can you hear me?
Yeah, I’m taking a leak out behind the truck and a dumpster right now.

[Laughs] Well, that’s going to be in the article, so make sure you keep saying intelligent things like that.
[Laughs]

I still think of you as being from the Ozarks, but you’ve been lurking around Arizona for 20 years now. What keeps you there, besides the alleys?
The sunshine. Right now, you should see the sky, Baker. I bet you got no sunsets down there in the Florida swamp.

[Laughs] What about the mountains? You’re a mountain man.
Well, I like the mountains, Baker. I have a feeling you do, too, but you traded ’em for alligators. That’s your business, not mine.

[Laughs] Well, this is your interview, not mine. Tell us about the Superstition Mountains and why they’re important to the Valley?
That’s a hard one. I don’t really know about the Sups other than, “There’s gold in them thar hills!”

[Laughs] Are you still in search of the goldmine?
A lot of people spend years digging for gold in those mountains.

The first time I remember skating with you was at Patty Seller’s ramp, and that’s right at the edge of the Superstitions. Was that the first place you started riding vert or were you riding vert before then?
I never rode vert before that. That was the first one.

How old were you when you started riding there?
I guess I would have been 14 or 15.

I saw the poster for the Christian Hosoi movie and Hosoi is riding at Seller’s. He’s not riding at Del Mar or some Calhookeey ramp. What was it like growing up and learning how to skate around such heavy hitters?
Well, I could tell that they were in their prime right there. I saw Hosoi in contests and knew that he was at his peak. There was Al Midgett, and a whole crew of underground lurkers at that point. That ramp had everything to do with it.

Who else was hanging around Seller’s ramp in those days?
Well, (Chris) Livingston was a big star. Chris Farrell was real prominent then. Everyone was real good already when I started. It was kind of a deterrent for me, because I was a little scared and intimidated by them all, but whatever. It was a beautiful thing, man. And look, Hosoi is still rockin’ it.

Describe the scene there. What was it like?
Well, I was kind of a straight-edger and those guys were smoking the shit out of weed. There was a deck built around the entire ramp, a tree house and porch for the ramp. Everyone was on cloud nine. They could all do airs all over the place. They were rock stars already. I remember Staab was there. Everyone would come through on the way to California. It was probably the best ramp on the West Coast in the late ’80s.

Remember they put the screws in every eight inches, so that the water line eroded in perfect lines? It’s all lined out on the photos in the ads that you’d see. It was called The Perfect Ramp.
That’s why they called it perfect. It was built by construction workers; not just with stolen wood from construction sites.

Do you remember skating with any of the JFA guys back then? They were big Arizona hitters.
I remember Brian the most, but I remember them all. At first, there was a big pro scene at Seller’s and everyone was intimidated, so no one really rode it that often. I got there and Orlando Baker told me that I couldn’t skate it.

[Laughs]
I came back the next day and Dutton (Shawn) was there by himself, and he was like, “Don’t worry about it. You’ll be all right.” It’s a typical little, goofy kid skate story. I just muscled my way in and I’ve been running it ever since.

I don’t know if you were just too aggro or trying to learn too fast, but I remember you were always racked up and injured back then. Talk about some of the bang ups you had multiple times in the beginning.
Well, I did try and go a little hard early on. I broke my wrist. Then I broke my leg. Then I broke my ankle when I had a cast on. Then I broke my wrist again when we went to Florida. We got to Stone Edge and Brewce Martin was there. I had a cast on and he told me that I was a giant puss if I was not going to skate the park. Then he brought me a hacksaw blade. I was only 17. I cut the cast off and went in all duct-taped up and ready to go. Then Jim (Stone Edge manager) crossed me. He called my mom and told her that I cut my cast off. Then my mom exiled me from the family. Dude, let me ride, but, hmmm… yeah…

I remember the day after you got your cast off your wrist, you came over to my house and jumped off the roof into a quarter pipe and broke your ankle. Your foot was facing backwards. I’d never seen anything like that before.
Well, I’d just as soon never talk about that, but, unfortunately, these things happen.

I was just letting people know that you were after it hard, early.
I still have screws falling out of my legs.

Did you ride many pools in the Seller ramp days or was that your main thing?
After that, I started riding them. We didn’t have a ramp, and then I met you guys. The old guys started taking me to illegal situations and I turned into a criminal.

[Laughs] As far as I remember, Seller’s ramp went down and our scene moved out to the Hillbilly ramp. Describe that scene.
They had an acre of land about ten feet wide. We went out there and found an old ramp. We told them we were down to re-layer it if we could widen it. The dude told us, “You can widen it to 23 feet.” So that cocksucker made us cut every piece of plywood down. It couldn’t be 24′. It had to be 23′.

Who was riding out there?
That would be you and Lange. We still had Livingston and Farrell, but then they started to fizzle out. Then it turned into the new Hessian SMP crew (Darwood, Becker, Roland, The Growth and Dugan). Bates was there and Colvin and Shags. It started to get a little more modern.

It went from a huge pro-bro scene to skating out in the country with some Oregon hicks.
Well, then you had Colvin with 50mm bearing covers on his wheels. He wanted to teach me how to do rail slides on a bench, you know?

[Laughs] Did you ever ride ASU back then?
I still ride ASU.

What was the street scene like in Phoenix?
That was a real good one. I can remember going down there and doing the five-story corkscrew downhill. Here’s my new deal. I’ve been talking to Shags. I’m trying to get a movie going where Dreamland and Grindline compete for the best park within five acres. Shags is claiming he’s going to build a two-story tunnel corkscrew full pipe.

Those guys are making it happen.
Monk and Quirk are behind it, with Red and all those guys.

I want to get back to the Hillbilly ramp. All the people out there ended up being called the “Meagers.” People still call me “Meager.” Do you remember how that whole thing started?
[Laughs] Well, the “Meager” thing started with everyone sneaking off with their weed. Tight little son of a bitches were hording their chronic in their own little pockets and nobody would break out, so we would say, “They’re meagering off.” Meagers.

[Laughs] What else were you skating? Pools were coming in, and the ditches. What were the good downhills in Phoenix?
There are some in Sunny Slope and Alatoukie. I remember going to a downhill at Bates and he claimed that he could do it switch. He started off switch, but ten feet in, he kicked it around and I didn’t see. I was like, “If he can do it, I can do it.” I got about halfway into it and started getting speed wobbles backwards. I didn’t know what to do. I knew if I fell, I would’ve done somersaults. So, I just looked at the side of the mountain and pretended like I was going fakie on a ramp all the way down. I made it, but I haven’t done a switch downhill since.