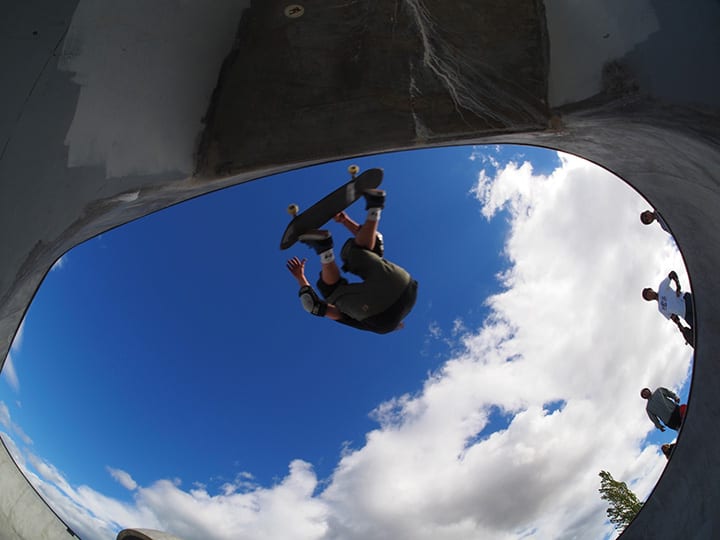 What set-up are you riding right now? Board, trucks, wheels, grip, hardware…
My set up is a Wounded Knee/MPS deck, 9” wide, 169s Independents and 62mm Bones SPFs.

What’s the most fun DIY, skater-built or renegade spot that you’ve skated lately?
The Pine Ridge Park in South Dakota that Monk and the boys just finished up is super fun.

Have you ever built something to skate?
I helped build the downhill Red Bull ramps in Prospect Park with Merk the Jerk and Jack Fitz. We built some downhill bowl ramps.

Who do you like to skate with the most these days?
East Coast Big Tim and Chicken Hawk.

Is there anything that hasn’t been built to skate yet that you’d like to see built?
I want to poach an idea that Shaggy had for a downhill skatepark in a parking garage with multi-levels. I’d love to see what that would be like. I think that would be epic.

What’s one of the best road trips you ever took?
Alva tour of Australia in ‘88 or ‘89. Everybody on the team was there except for John Thomas and it was a really sick road trip.

Are there any skate-related charities that you support?
Stronghold Society and big props to the Tony Hawk Foundation.

What music have you been listening to lately?
Led Zeppelin and Jimi Hendrix.

What do you consider the responsibilities of a professional skateboarder?
The utmost responsibility is to be super cool to young kids and realize that your interaction with them could last them a lifetime, so be cool and don’t be a jerk and keep skating for the rest of your life.

Favorite skate photo of all time?
Any photo of Jay Smith doing a layback. The sequential in Skateboarder was epic. There’s a backyard shot of him standing up in a pool grinding towards the hip that’s sick and also the Salba/Dunlap doubles shot at Upland.

What is your take on girls skateboarding?
I think it’s rad. It’s the best. I think more girls should skate and get a huge support crew out there because women are as talented as men. They can do anything that men can do, so get out there and rip it up.

What skateboarding memorabilia do you have that means the most to you?
Print shot of Andy Kessler kicking down the street by Ivory Serra. It’s the original shot that was used on the Juice cover.

Who contributes the most to your local skate scene?
Andy Kessler, even though he’s gone to the next level, is a huge influence on what gets built here. Because of his attitude and his legacy, we all live and die by it. Hands down, Andy Kessler, New York City.

Do you think skateboarding should be in the Olympics?
It’s a double-edged sword. I have mixed emotions. Part of me doesn’t want to see it turn generic in the eyes of the world, but another part of me sees it as a great opportunity for young kids. It’s all about the youth and, if there is some way it can give them more opportunities and get more concrete built and it’s inevitable it’s going to be in the Olympics, so be it. Let’s see if we can try to keep it gnarly.

What is your proudest moment in skateboarding so far?
Being out on the Pine Ridge Reservation and seeing Monk building a skatepark for the kids on that Reservation.