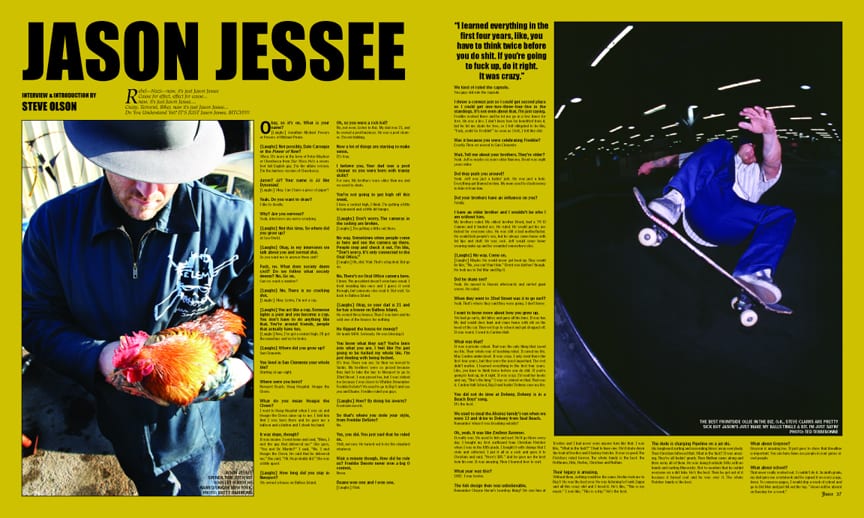 “MY DAD USED TO TELL ME, “IF PEOPLE WANT TO DEBATE YOU, JUST PAT THEM ON THE SHOULDER AND TELL THEM TO GO HAVE A SANDWICH. AND JUST WALK AWAY. DON’T DEBATE THEM.”

Okay, so it’s on. What is your name?
[Laughs] Jonathan Michael Powers or Powers of Michael Pirate.

[Laughs] Not possibly, Dale Carnegie or the Power of Now?
Whoa. It’s more in the form of Peter Mayhew or Chewbacca from Star Wars. He’s a seven-foot tall English guy. I’m the albino version. I’m the hairless version of Chewbacca.

Jason? JJ? Your name is JJ like Dynomite!
[Laughs] Okay. Can I have a piece of paper?

Yeah. Do you want to draw?
I like to doodle.

Why? Are you nervous?
Yeah, interviews are nerve wracking.

[Laughs] Not this time. So where did you grow up?
At Sea World.

[Laughs] Okay, in my interviews we talk about you and normal shit.
So you want me to answer them civil?

No. What does society deem civil? Do we follow what society deems? No. Go on.
Can we crack a window?

[Laughs] No. There is no cracking shit.
[Laughs] Okay. Listen, I’m not a cop.

[Laughs] You act like a cop. Someone lights a joint and you become a cop. You don’t have to do anything like that. You’re around friends, people that actually have fun.
[Laughs] Now, I’ve got a contact high. I’ll get the munchies and we’re broke.

[Laughs] Where did you grow up?
San Clemente.

You lived in San Clemente your whole life?
Starting at age eight.

Where were you born?
Newport Beach. Hoag Hospital. Hoagie the Clown.

What do you mean Hoagie the Clown?
I went to Hoag Hospital when I was six and Hoagie the Clown came up to me. I told him that I was born there and he gave me a balloon and a button and I shook his hand.

It was dope, though?
It was insane. I went home and said, “Mom, I met the guy that delivered me.” She goes, “You met Dr. Martin?” I said, “No. I met Hoagie the Clown. He said that he delivered me.” She said, “Oh. He probably did.” She was a little upset.

[Laughs] How long did you stay in Newport?
We owned a house on Balboa Island.

Oh, so you were a rich kid?
No, not even. Listen to this. My dad was 21, and he owned a pool business. He was a pool cleaner. I’m not kidding.

Now a lot of things are starting to make sense.
It’s true.

I believe you. Your dad was a pool cleaner so you were born with tranny skills?
For sure. My brothers were older than me and we used to skate.

You’re not going to get high off this weed.
I have a contact high, I think. I’m getting a little bit paranoid and a little bit hungry.

[Laughs] Don’t worry. The cameras in the ceiling are broken.
[Laughs] I’m getting a little out there.

No way. Sometimes when people come in here and see the camera up there. People stop and check it out. I’m like, “Don’t worry. It’s only connected to the Oval Office.”
[Laughs] Oh, shit. Wait. That’s a big deal. But go on.

No. There’s no Oval Office camera here.
I know. The president doesn’t even have email. I tried emailing him once and I guess it went through, but someone else read it. But wait. Go back to Balboa Island.

[Laughs] Okay, so your dad is 21 and he has a house on Balboa Island.
He owned three houses. Then I was born and he sold one of the houses for nothing.

He flipped the house for money?
He made $400. Seriously. He was blowing it.

You know what they say? You’re born into what you are.
It’s true. There you are. So then we moved to Tustin. My brothers were so pissed because they had to take the bus to Newport to go to 32nd Street. I was pissed too, but I was stoked too because I was closer to Whittier. Remember Freddie DeSoto? We used to go to Big O and see you and Duane. Freddie ruled you guys.

[Laughs] How? By doing his inverts?
Frontside inverts.

So that’s where you stole your style, from Freddie DeSoto?
No.

Yes, you did. You just said that he ruled us.
Well, not now. He turned out to be the standard whatever.

Wait a minute though. How did he rule us? Freddie Desoto never won a big O contest.
Never.

Duane won one and I won one.
[Laughs] Wait.

I threw a contest just so I could get second place so I could get one-two-three-four-five in the standings. It’s not even about that. I’m just saying.
Freddie worked there and he let me go in a few times for free. He was a bro. I don’t know how he benefited from it, but he let me skate for free, so I felt obligated to be like, “Yeah! Go Freddie!” As soon as I left, I felt like shit.

Was it because you were celebrating Freddie?
Exactly. Then we moved to San Clemente.

Wait. Tell me about your brothers. They’re older?
Yeah. Jeff is maybe six years older than me. Brent was eight years older.

Did they push you around?
Yeah. Jeff was just a jerk. He was just a hole. Everything got blamed on him. My mom used to stash money to hide it from him.

Did your brothers have an influence on you?
Totally.

I have an older brother and I wouldn’t be who I am without him.
My brothers ruled. My oldest brother Brent, had a ’79 El Camino and it hauled ass. He ruled. He would get his ass kicked for everyone else. He was still a badass. He would kick people’s ass, but he always came home with fat lips and stuff. He was cool. Jeff would come home wearing make-up and be wounded somewhere else.

[Laughs] No way. Come on.
[Laughs] Maybe. He would never get beat up. They would be like, “No, you can’t hurt him.” Brent was bitchen’ though. He took me to Del Mar and Big O.

Did he skate too?
Yeah. He moved to Hawaii afterwards and surfed giant waves. He ruled.

When they went to 32nd Street was it to go surf?
Yeah. That’s where they said they were going. I don’t know.

I want to know more about how you grew up.
We had go-carts, dirt bikes and guns all the time. It was fun. My dad would deer hunt and come home with elk on the hood of the car. Then we’d go to school and get dropped off. It was weird. I went to Carden Hall.

What was that?
It was a private school. That was the only thing that saved my life. Their whole way of teaching ruled. It saved my life. May Carden understood. It was crazy. I only went there the first four years, but they were the most important. The rest didn’t matter. I learned everything in the first four years. Like, you have to think twice before you do shit. If you’re going to screw up, do it right. It was crazy. I’d read her books and say, “She’s the king.” I was so stoked on that. That was it. Carden Hall School, Big O and Doheny save my life.

You did not do time at Doheny. Doheny is in a Beach Boys’ song.
It’s the best.

We used to steal the Alvarez family’s van when we were 13 and drive to Doheny from Seal Beach.
Remember when it was breaking outside?

Oh, yeah. It was like Endless Summer.
It really was. We used to fish and surf. We’d go there every day. I bought my first surfboard from Christian Fletcher when I was in the fifth grade. I bought it with change that I stole and collected. I put it all in a sock and gave it to Christian and said, “Here’s $85.” And he gave me the best twin fin ever. It was amazing. Then I learned how to surf.

The fish design then was unbelievable.
Remember Cheyne Horan’s teardrop thing? We saw him at Trestles and I had never seen anyone turn like that. I had to have one. We’d skate down the trail at Trestles and I had my twin fin. It was so good. The Fletchers ruled forever. The whole family is the best: the Hoffmans, Dibi, Herbie, Christian and Nathan.

Their legacy is amazing.
Without them, nothing would be the same. Herbie took me to Big O. He was the best ever. He was listening to Frank Zappa and all this crazy shit and I loved it. He’s like, “This is my music.” I was like, “This is a trip.” He’s the best.

The dude is charging Pipeline on a jet ski.
His longboard surfing and noseriding blows away everybody. Then Christian followed that. It was amazing. They’re all gnarly. Then Nathan came along and blew away all of them. He was doing frontside 540s with no hands and surfing Mavericks. Not to mention that he outdid everyone on a dirt bike. He’s the best. Then he got out of it because it turned cool and he was over it. The whole Fletcher family is the best.

What about Greyson?
Greyson is amazing too. It just goes to show that bloodline is important. You can have lame ass people in your genes or cool people.

What about school?
That never really worked out. I couldn’t do it. In ninth grade, my dad gave me a notebook and he signed it on every page, twice. To conserve pages, I would skip a week of school and go to Del Mar and just fill out the top. “Jason will be absent on Tuesday for a week.”

Wow. Your pops was that cool?
Yeah. He rules. I would never write notes for my kids to get out of school. I’d be like, “Wait a minute. This world is so screwed up. You have to have an education to pull it. There are a lot of stupid people out there.” But he was just like, “Whatever. You’re on your own.”

He understood the scene didn’t fit, so here’s an out.
Then we got busted.

[Laughs] What kind of shit did your pop build?
He was into hemi motors. He had one that he’d had since before I was born. It’s the baddest motor ever. It’s 1000 horsepower. It’s a 1958 Imperial motor. He had it for 39 years. My dad used to tell me, “If people want to debate you, just pat them on the shoulder and tell them to go have a sandwich.” And just walk away. Don’t debate them.

[Laughs] Just walk away. That’s so dope.
He rules.