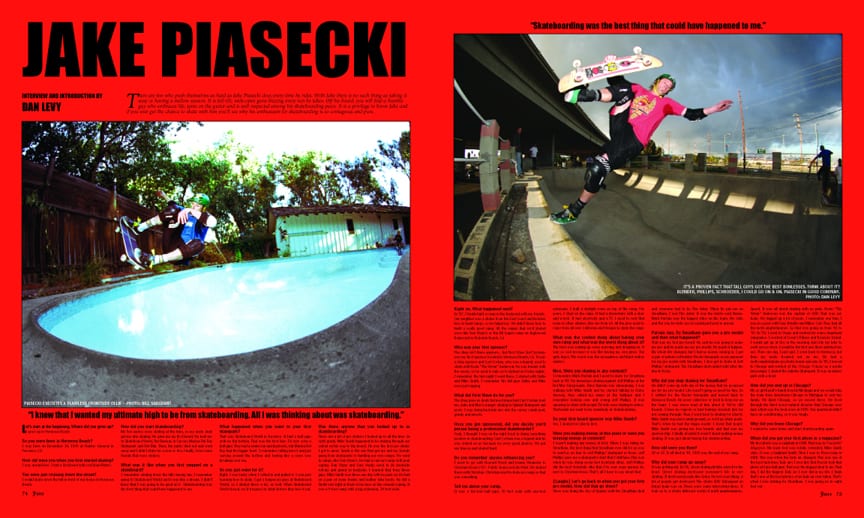 There are few who push themselves as hard as Jake Piasecki does every time he rides. With Jake there is no such thing as taking it easy or having a mellow session. It is full-tilt, wide-open guns blazing every run he takes. Off his board, you will find a humble guy who embraces life, jams on the guitar and is well respected among his skateboarding peers. It is a privilege to know Jake and if you ever get the chance to skate with him you’ll see why his enthusiasm for skateboarding is so contagious and pure.

“SKATEBOARDING WAS THE BEST THING THAT COULD HAVE HAPPENED TO ME.”

Let’s start at the beginning. Where did you grow up?
I grew up in Hermosa Beach.

So you were born in Hermosa Beach?
I was born on December 14, 1970 at Harbor General in Torrance, CA.

How old were you when you first started skating?
I was around five. I had a Flexboard with red Road Riders.

You were just cruising down the street?
I would skate down the hill in front of our house in Hermosa Beach.

How did you start skateboarding?
My two uncles were skating at the time, so my uncle Andy got me into skating. He gave me my first board. He took me to Skateboard World, The Runway in Carson, Marina Skatepark and Del Mar. Then, the parks died out and went away and I didn’t skate for a year or two. Finally, I met some friends that were skaters.

What was it like when you first stepped on a skateboard?
I remember skating down the hills having fun. I remember going to Skateboard World and it was like a dream. I didn’t know that I was going to be good at it. Skateboarding was the best thing that could have happened to me.

What happened when you went to your first skatepark?
That was Skateboard World in Torrance. It had a half pipe with no flat bottom. That was the first time I’d ever seen a half pipe. They had a snake run and big bowls, but Marina Del Rey had the bigger bowl. I remember rolling into it and just carving around the bottom and feeling like a wave was breaking over me.

So you just went for it?
Right. I was lucky when I rolled in and pulled it. I was just learning how to skate. I got a temporary pass at Skateboard World, so I skated there a lot as well. When Skateboard World closed, we’d trespass to skate before they tore it out.

Was there anyone that you looked up to in skateboarding?
There are a lot of pro skaters I looked up to all the time. In sixth grade, Mike Smith happened to be skating through our school on his way to the beach. He was the first pro skater I got to meet. Smith is the one that got me and my friends going from skateparks to building our own ramps. We went to ramps, like Tom Wynn’s. He had a rad vert ramp with pool coping. Tom Wynn and Gary Hazily used to do backside roll-ins and grinds in backside. I learned that from those guys. Mike Smith was there one day with no pads on. He had on a pair of swim trunks and leather bike boots. He did a Smith vert right in front of my face on the cement coping. It was a 9-foot ramp with a big extension, 30 feet wide.

Right on. What happened next?
In ’87, I finally built a ramp in the backyard with my friends. Our neighbor was a skater from the East Coast and he knew how to build ramps, so he helped us. We didn’t know how to build a really good ramp. All the ramps that we’d skated were like Tom Wynn’s or the BK Liquor ramp on Inglewood Boulevard in Redondo Beach, CA.

Who was your first sponsor?
The shop isn’t there anymore , but First Wave Surf Systems was my first sponsor located in Hermosa Beach, CA. It was a shop sponsor and Curt Cortum, who was a legend, used to skate with Kevin “The Worm” Anderson. He was friends with the owner, so he used to take us to Upland on Friday nights. I remember the last night I went there, I skated with Salba and Mike Smith. I remember the full pipe Salba and Mike were just ripping.

What did First Wave do for you?
The shop gave us deals, but most important Curt Cortum took me, Juko and Max Loranger skating to Upland Skatepark and pools. I was doing backside airs into the corner combi pool, grinds and inverts.

Once you got sponsored, did you decide you’d pursue being a professional skateboarder?
Yeah. I thought I was on the right track to doing something positive in skateboarding. Curt Cortum was a legend and he was stoked on us because we were good skaters. We put our time in and skated hard.

Do you remember anyone influencing you?
I used to go with Howard Hood and Lonnie Hiramoto to Christian Hosoi’s W.C. Fields’ house in Echo Park. We skated there with Christian. Christian used to skate my ramp so that was something.

Tell me about your ramp.
It was a ten-foot half pipe, 20 feet wide with one-foot extension. I built a skylight room on top of the ramp. For years, I slept on the ramp. It had a downstairs with a door and a lock. It had electricity and a TV. I used to rent that room to other skaters, like Joe from LA. All the pros used to come from all over California and Oregon to skate the ramp.

What was the coolest thing about having your own ramp and what was the worst thing about it?
The best was waking up every morning and dropping in. It was so cool because it was like having my own place. The girls dug it. The worst was the mosquitoes and black widow spiders.